The first religion of Divine Forgiveness 44 BC - Clementia/Eleos

The Romans were worshiping Clementia (Mercy/Clemency) as a Divine Force (represented as feminine), the first known temple was in 44 BC. Later, it spread to Athens (in Greece) where Mercy was worshiped as Eleos (which means Mercy in Greek). At "The Altar of Mercy" in Athens, people would cry and give their prayers to Eleos/Mercy, asking her for forgiveness and to inspire forgiveness to keep peace and keep away war.

E′LEOS (Eleos), the personification of pity or mercy, had an altar in the agora at Athens. "The Athenians," says Pausanias (i. 17. § 1), "are the only ones among the Hellenes that worship this divine being, and among all the gods this is the most useful to human life in all its vicissitudes." Those who implored the assistance of the Athenians, such as Adrastus and the Heracleidae, approached as suppliants the altar of Eleos. (Apollod. ii. 8. § 1, iii. 7. § 1; Schol ad Soph. Oed. Col. 258 )

Source: Dictionary of Greek and Roman Biography and Mythology.

Mercy/Eleos/Clementia is usually personified as a young woman with a blue dress or veil:

Anyway, I just thought this was interesting that there was a religion of forgiveness even in BC times. I think most people know about Zeus, and Ares but I don't think this is well known.

Julius Caesar, who was deified shortly after his death, shared a temple with the goddess Clementia . 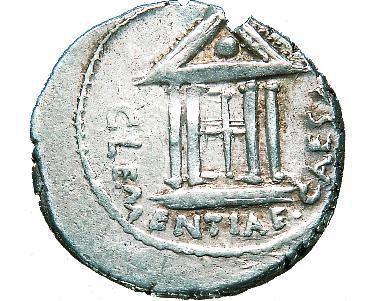 According to what I've read, Julius was associated with Clementia because he forgave his enemies at war.

Edit: There's a cross in that coin, and Clementia reminded me of Mary, Mary is usually drawn with a blue veil also, and Mary is also associated with mercy from what I've read.
edit on 22-5-2015 by arpgme because: (no reason given)

posted on May, 22 2015 @ 08:02 PM
link
The Greek word aphesis is translated forgiveness.It means freed from bondage.Pardoned of guilt is a modern definition.It is not the definition of the word aphesis written in the new testimony.

posted on May, 22 2015 @ 08:41 PM
link
It's crazy how all these myths and gods from different cultures are so interwoven together. Each new religion is like an amalgamation of the ones that came before it, Christianity is no different. It's a melding of several different myths into a new version of the same story and pantheons.

Catholic means "universal", maybe that's a nod toward Christianity being universally relatable when it comes to the religions and cults that came before? Very interesting.


Edit: There's a cross in that coin, and Clementia reminded me of Mary, Mary is usually drawn with a blue veil also, and Mary is also associated with mercy from what I've read.

Yes. That coin predates Mary and Jesus though. Julius Caesar's wax effigy was placed on a cross, a sacred symbol to the Romans. 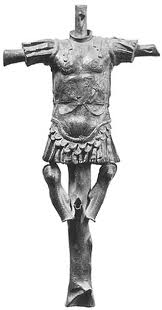 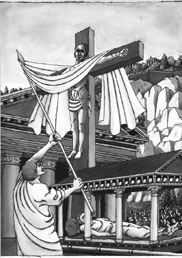 originally posted by: arpgme
a reply to: Rex282

The first religion of Divine FORGIVENESS 44 BC - Clementia/Eleos

Wow. The Cross and The "Star" (comet). I'm not sure about the Julius Caesar Temple, but the worship of Mercy (Clementia/Eleos), never caused wars (they believed Mercy kept wars away). With Jesus teaching to love enemies and forgive, it's strange that Christians who say they follow Christ could make such wars and be unaccepting of others.

Mercy/Clementia/Eleos seems to not only be against war because of mercy, but also praying for others and helping others. Then again, no one ever caused a war for Mary either (I don't think) and Mary is also called Mother of Mercy, so maybe there is a connection.

Maybe this "Mother of Mercy" (whether refering to Mary or Clementia) is the only one who will actually keep people peaceful and away from violence, there seems to be a lot of confusion between violence and peace in Christianity, but not once did anyone ever claimed Mary or Clementia promoted violence or told them to kill, (I don't think), but people have been claiming to kill for "Lord", "God", and "Jesus", and with so many mixed up teaches people can promote anything using Jesus peaceful teachings one minute then a yahweh verse the next.
edit on 22-5-2015 by arpgme because: (no reason given)

posted on May, 22 2015 @ 11:29 PM
link
a reply to: arpgme
This is indeed another religion that taught a doctrine of divine forgiveness. Not the first though. There is Tammuz and Prometheus for example, both of which pre-date Christianity by centuries. Both gave their lives for forgiveness of sin and salvation. But Eleos would no doubt be one of the rare feminine based religions of this nature.


Exactly. Not so surprising that the Catholics pray to Mary considering your OP, is it?

S&F. Glad you posted this.

I guess Tammuz and Prometheus would be closer to Pauline Christianity since they died for sins and the salvation of others.

Mercy/Eleos didn't become human and die for sins, but this religion does seem to fit with all of the Gospel teachings about the Divine being kind to the good and evil (Luke 6:35/Matthew 5:44), turning the other cheek (Matthew 5:39), not using weapons and therefore perishing with them (Matthew 26:53), and forgiving instead of judging and condemning (Luke 6:37).