It reminds me of Close Encounters of the Third Kind when the military was using commercial trucks to transport troops and equipment. In this video, all the trucks are in the far left lane, they are bunched in groups by companies.

All the exits were blocked, and the state troopers were off the shoulder. This was I-64 near Richmond, Virginia and the lady says there were other people taking a video of it.

I don't know what happened, the people in the video also didn't know, but they were suspicious enough that they caught it on video. What happened in October that these commercial trucks would have been used like this?

originally posted by: Asktheanimals
This was for a fund raiser or something if I recall correctly.
At any rate you put away the doom on sign about this.

I've driven on many interstates in my life, I had never seen anything like it myself.

originally posted by: RP2SticksOfDynamite
a reply to: WarminIndy newly built trucks being delivered to the customers

I know there is a diesel truck plant in Greensboro, North Carolina, but I didn't know there was one in Richmond, Virginia. I hadn't even seen that happen the whole 9 years I lived near Greensboro.

Maybe that's the way they do it now. I don't know.

originally posted by: ignorant_ape
an idiot saying " i dont know whats going on " does NOT make an event ` suspicious `

I would have been suspicious though because in all my almost 30 years of driving experience, quite a bit on interstates, I had never seen anything like that.

I do know that they transport nuclear waste across country in diesel trucks, it would make sense to make it covert by hiding it between trucks.

I would be nervous thinking about it.

originally posted by: Monkeygod333
From the comment section of the video;


OK, I took your advice and looked it up. The convoy started out in Doswell, Virginia. Thank you for correcting me.

However, when we have been presented with the idea so long that the military or the government uses our interstates in covert ways, sometimes we just question the things we see. That is why we are on ATS.

Suppose this, one of these trucks were used to haul nuclear waste, just because it is a Special Olympics event doesn't mean that it would be off limits to any covert action by the government.

You never can be sure these days.

posted on May, 17 2015 @ 07:42 AM
link
There would be no way that one of these vehicles would be one of the government's "special trucks" . This convoy would draw too much attention. It would be more likely while everyone's attention was on the other side lanes and the convoy , "the one truck" would be traveling on this side of the highway going the other way.

That is likely Zaphod58 playing with his new fleet of autonomous trucks.

posted on May, 17 2015 @ 07:53 AM
link
Possibly they are filling the void at a mountain bunker. I think of the Fallout 3 game. If you have a few hundred hours to spend playing the Fallout 3 you should do it. Seriously. The Fallout 3 game takes place a long time after a nuclear confrontation and places you as a guy or a girl (your choice) coming out of a bunker in D.C. and it is super fun.

More on topic is that the shipment had some interesting carriers. You can bet it had everyone's attention going the opposite direction. Hard not to notice. Heck, if it is not us eating ourselves alive like Rome then it, might be outer space ready to give us an Earth rumbling game changer. I'd bet a dollar to a donut civil unrest from an economic failure of our supposed empire would have surer odds. Although there's this... and I think it is just as viable of a suggestion to underground plans and if you aren't into conspiracy then why are you here? Video please...

I believe planetary alignments play a part in our Earths stability regarding geomagnetic activity. I thought the relation to the Nostradamus quatrain is interesting at face value. Personally, if I had to choose, I'd rather any chaotic event hopefully pull us together for reasons not politically or underhandedly motivated so that we might come through it as a team as opposed to us pitting ourselves against each other for ignorant reasons. If nothing else, take stock in the carriers we saw on the video because they are or were filling some big orders.

The video states that even after it was explained, there were still people in disbelief, pointing out how little everyone trusts their government. Yeah, maybe its the worlds largest human trafficking operation designed to take place right under your nose! Hurry, we need to save them! LOL

Nuclear materials, such as waste, are shipped in large concrete casks, and are clearly marked as radioactive. All hazmat is marked so that if an accident occurs the firefighters are aware of it and how to fight it. Otherwise they could make things a lot worse. The casks are transported on flatbed or drop deck trucks, because they're big, heavy, and would be almost impossible to fit into a van trailer. 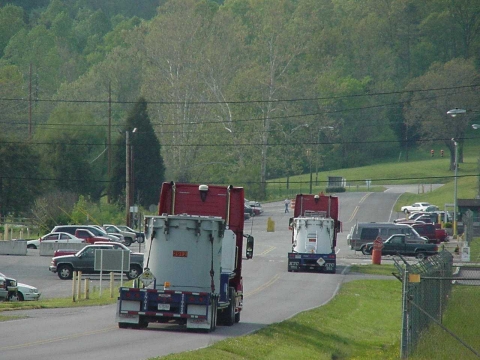 Just strange that there are arrogant people who act all smarmy and arrogant.

Glad you got an answer. 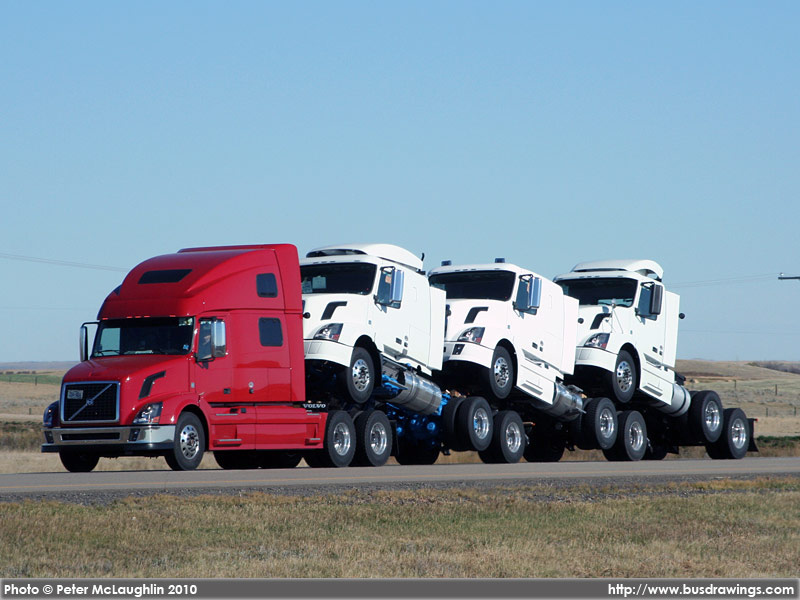 originally posted by: Zaphod58
a reply to: RP2SticksOfDynamite


See, now that's what I am used to seeing.

posted on May, 17 2015 @ 01:56 PM
link
Happens every year. It is foe Special Olympics as already pointed out. This has already made the rounds more than once. As for nuclear waste hauling...why would they hide it ? Its not illegal nor is it a big secret as far as everyone knows it does get moved. It gets moved everyday from every hospital in every city somewhere so if someone wanted a shot at nuclear waste that would be the place to start.