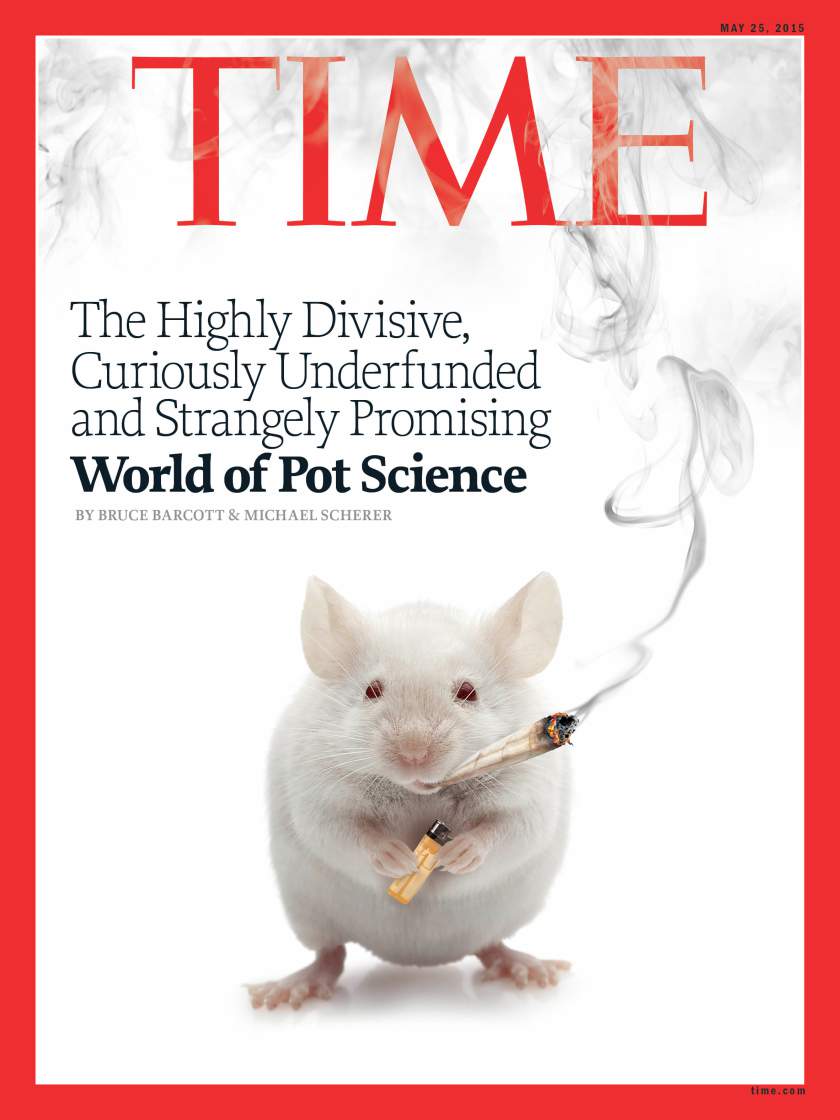 This issue of TIME Magazine displays this shift very poignantly.

Many of you here know me as a cannabis/hemp advocate. But I'm not beyond pointing out the facts. I found this study interesting.

Yasmin Hurd raises rats on the Upper East Side of Manhattan that will blow your mind.

Though they look normal, their lives are anything but, and not just because of the pricey real estate they call home on the 10th floor of a research building near Mount Sinai Hospital. For skeptics of the movement to legalize marijuana, the rodents are canaries in the drug-policy coal mine. For defenders of legalization, they are curiosities. But no one doubts that something is happening in the creatures’ trippy little brains.

In the past, scientists have found that rats exposed to THC in their youth will show changes in their brain in adulthood. But Hurd asked a different question: Could parental marijuana exposure pass on changes to the next generation, even to offspring who had never been exposed to the drug?


She then trained the children to play a game alone in a box. The prize: heroin. Press one lever to get a shot of saline into the jugular vein. Press the other to get a rush of opiates. Initially, the rats with THC-exposed parents performed about the same as the rats with sober parents. But when Hurd’s team changed the rules, requiring the rats to work harder for the drug, differences emerged. The rats with drug-using parents pushed the lever more than twice as much. They wanted the heroin more.

So in conclusion she found that cannabis does indeed effect a developing brain. Just like alcohol and tobacco. To what level is still up for debate. I personally believe it's a lot safer than giving a child Benzodiazepine for epilepsy.
She also discovered.


“This data tells us we are passing on more things that happen during our lifetimes to our kids and grandkids,”

Now lets think about that statement...
How much worse is the effect with truly addictive potentially deadly substance?
Remember cannabis is NOT deadly. The article even points this out.


The effects are generally less severe than those of tobacco and alcohol, which together cause more than 560,000 American deaths annually. Unlike booze, marijuana isn’t a neurotoxin, and unlike cigarettes, it has an uncertain connection to lung cancer.

This says that even if we are clean and sober now our reckless past is effecting our offspring. I find that a million times more important than the debate of cannabis. How many previous generations are driving your actions at this very moment?

Kinda eye opening when you think every drunk, smoker, junkie in your family tree could be effecting you on a genetic level. Thanks ancestors!


Sublimecraft
+31 more
posted on May, 14 2015 @ 07:48 PM
link
Just legalise it, for Gods sake, it is the wonder-plant of wonder plants, it is a relaxant, it cures ailments, it's properties can produce oils and textiles, and still to this day I have old-school hemp rope at home whose breaking strain is only surpassed by plasma-line (at about 500x the cost)

Enough is enough, and if you are anti-pot legalization, good........no great, don't go near it or you will die.

posted on May, 14 2015 @ 07:48 PM
link
Many years ago when the BBC produced 'less biassed' science programs (Horizon) they showed a study done on rats in a maze. They placed rats in a maze and let them learn the route through the maze, they then found that the children of those rats found the route almost imediately!

How does she know it wasn't the heroin that caused this behavior?

This study is idiotic.

Why not just use a THC injection instead of heroin?

Those with parents who worked in drywall prefer heroin to alcohol.

Yeah agree with the above poster....just legalize it already....

posted on May, 14 2015 @ 08:08 PM
link
And the biggest thing most people offer little consideration to, especially when looking at statistics and general trends is this....

It's not so much what you do to a mind but the mind you do it to.

7 billion individuals will not behave the same, so what's good for one person may not be good for another. Cannabis has it's uses, medical and personal, but lets be sensible people and consider each use and user seperately.

But I feel the need to point out to everyone. All it is going to take is a Attorney General who does not agree. With one directive someone like that could bring this whole experiment to an end.


If you're serious about legalization it has to be tackled at the federal level.

Just legalise it, for Gods sake, it is the wonder-plant of wonder plants

I live in Washington state (Seattle)...it's legal here...I know a few cancer patients that are glad about it. One woman has bone cancer and she only has an appetite if she smokes.

That's one of the medical things it's great for, an appetite. I have kidney disease and very often don't have an appetite. Luckily my state has legal medical marijuana, possibly recreational soon. As an example, about a month ago I didn't have my medication. I went from 240 pounds to 220 pounds in 7 days. I know, probably still sounds like I'm too fat at 220, but I'm 6'5, so it's not as bad as it sounds.

It's also great for nausea, which I deal with on a daily basis and which also contributes to not having an appetite. There are other things as well, but I'm kind of going off topic at this point a bit I think.

As far as the study, it seems odd and I wonder greatly how it translates to humans, especially considering both my parents smoked for many years.

In honor of rats, by the way:

Or to juice Cannabis Raw uncooked.

Cooked cannabis always has a psychoactive effect, If she wants to fight cancer. It has to be with uncooked Cannabis.

High CBD will not get a person high however, she can take both high THC and and CBD. Cooked THC so that it becomes THC acid which is what gets one high to remove pain, Eating edibles tho is recommended as the pain relief effects are much stronger in edibles.

Smoking doesn't last as long either. But your friend should defenantly get their hand on both high CBD and edible THC ones. It would be recommended if she grew enough to make smoothies of the high CBD plants. People have cured severe diseases by using such methods as the juicing method.

posted on May, 14 2015 @ 11:07 PM
link
a reply to: Pimpish
Hi Pimpish,
did you know the London school of medicine did a large study on kidney disease
and they discovered that one teaspoon of baking soda disolved in a glass
of water per day was enough to reduce the necessity of dialysis by 2/3 in patients with kidney conditions..? Meaning people who previously needed dialysis no longer had to have it, Maybe try that first thing in the morning
and see how you feel ...

I did not know that and I will definitely check it out. Thank you for bringing that to my attention!

originally posted by: JAY1980
As the debates rage on about cannabis and it's legalization, prohibition, medicinal value, dangers, and abuse. We are starting to see a major shift in overall mentality.

originally posted by: simplesurfer
a reply to: Pimpish
Hi Pimpish,
did you know the London school of medicine did a large study on kidney disease
and they discovered that one teaspoon of baking soda disolved in a glass
of water per day was enough to reduce the necessity of dialysis by 2/3 in patients with kidney conditions..? Meaning people who previously needed dialysis no longer had to have it, Maybe try that first thing in the morning
and see how you feel ...

Make sure you buy medical grade sodium bicarbonate as that has the mining impurities taken out and always juice a lemon or lime with the peels on as this replaces the stomach acid that the bicarb removes. heat it up to 36 Celsius with 3-4 ounces of distilled water and consume within 15 minutes wait an hour after taking the bicarb to let it filter into your body.

posted on May, 15 2015 @ 03:03 AM
link
Either legalize pot or at least make alcohol and tobacco illegal already. But make up your mind. The latter two kill more people than an H bomb annually.

I went into a store and picked some up the other day just to do it. It was sort of bizarre. Past experiences make me very hesitant to try again.

Glad the people who need it can get it and people have a safer alternative, not to mention the taxes pouring in.

posted on May, 15 2015 @ 12:48 PM
link
Nevermind tobacco and alcohol. I would wager that consumption of Big Macs and Coke result in more deaths than consumption of cannabis.

originally posted by: JAY1980
Kinda eye opening when you think every drunk, smoker, junkie in your family tree could be effecting you on a genetic level. Thanks ancestors!


The biggest way my lazy, drunk, stupid, crazy, no-account ancestors screwed up my life is not working really hard and getting very, very rich. I may have brain problems, but they're nothing compared to the societal problems I have as a result of being born into a low- to lower-middle class family. Being rich takes a lot of the sting out of being stupid or nuts.

originally posted by: VoidHawk
Many years ago when the BBC produced 'less biassed' science programs (Horizon) they showed a study done on rats in a maze. They placed rats in a maze and let them learn the route through the maze, they then found that the children of those rats found the route almost imediately!

Rats are Rats, they are not the same as people.