Will Jade Helm cause civil unrest regardless of it’s intention? 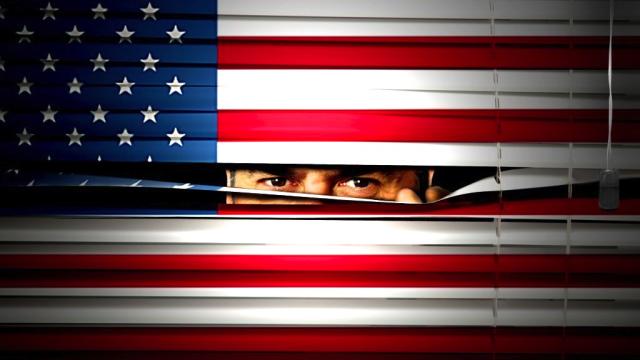 Lt. Col. Mark Lastoria tried to assure the crowd that no intelligence would be gathered on non-participants, no property would be confiscated, and no psychological operations would be conducted.

Since the dawn of time, humans have feared what they cannot understand or explain. This is normal human behavior, but not entirely uncontrollable.

Fear protects us from threats we may encounter and forces us to react offensively or defensively, whichever effectively causes one’s fear to diminish.

Jade Helm is a military exercise. Just because it is labeled as such, does not mean it wont evolve into something else altogether. Many people are concerned and the paranoia has spread like wildfire. For an exercise meant to operate unnoticed they sure have gotten many people’s attention.

People stand up for different reasons at different times and the more segregated we are as a country, the less we stand up together. Many here will say it is too late or we missed the chance. Others will say the right time has not come yet. Some are right on the cusp.

One man stood up to ask a series of increasingly specific questions about what would happen to protesters who disrupted Jade Helm exercises and whether the operations would be suspended. 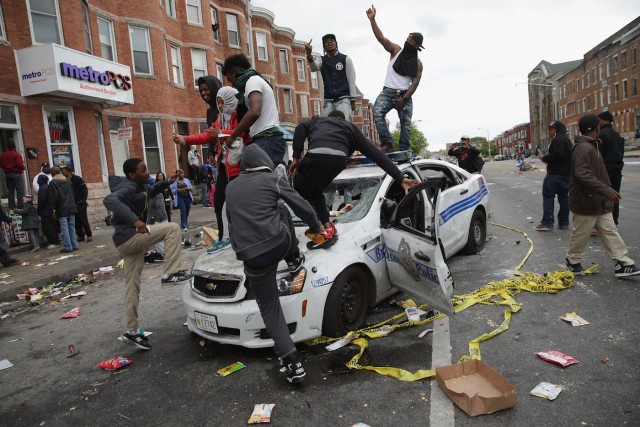 “I would find it bizarre that someone would violate someone’s private property to make a personal statement,” Lastoria said.

Riiight...This guy has either been living under a rock or unwilling to entertain the heavy cognitive dissonance in the room. Its almost laughable.

Jade Helm has brought an interesting scenario to America and it’s people are in a state of confusion. Paranoia can arises from confusion if the scenario is perceived as a possible threat. Whether that paranoia is justifiable or not remains to be seen.

Could the confusion surrounding Jade Helm cause Americans to express their fears? What if a violent protest breaks out in Utah or Texas during the exercise? If a civilian accidentally gets injured or killed, how would Americans perceive the incident? Will we see militias emerge in order to keep an eye on things? WWCND? 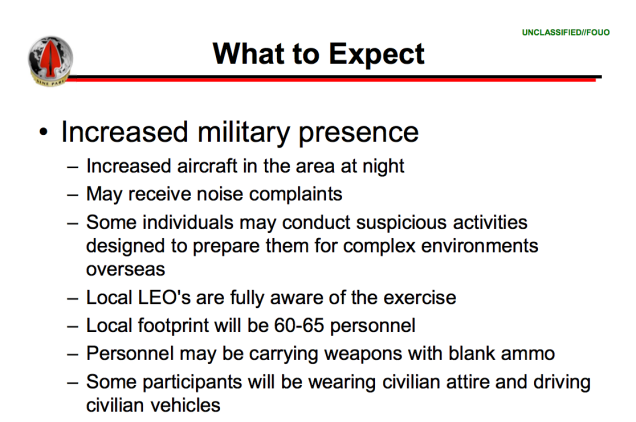 To borrow the words of another, “What we have here is armed military in civilian clothes, driving civilian vehicles, conducting suspicious activity in public places.” Seriously, what could go wrong?

I have been trying to find the article but like 10 years ago some SF guy got shot by a cop. Over at Fort Brag there is a town they do training with and the locals are very used to these guys and everything works fine for the most part. However someone called in something suspicious and the cop who showed up saw an armed sf guy and shot him. I can't really say its anyone's fault either way but # just happens when you have this kind of stuff.

I personally believe this is about training for human intelligence. Human intel is the eyes on. There are civilian groups that do this of course like the CIA and MICECP for the Army (although I heard they may get axed soon, and have been reduced)...FBI deals in counter intel...Im sure DIA has some Human Intel guys too. Point is SF guys probably kind of stand out in this field, and if groups like MICECP are being cut back then who picks up that human intel side...why not SF units? But they need more training as most of it is going to so many other things.

posted on May, 10 2015 @ 02:24 PM
link
It's certainly going to cause a lot of fear mongering and butt-hurt, at least. I can't remember the last time I looked at the "new thread" feed and didn't see something JH related, or something that didn't get circuitously brought back to JH. It's pretty amazing, actually. Some highly flexible minds out there.

As to what to expect? Probably pretty much they've said they're going to do. I'm sure there will be loads of stories that come out of the exercise area though. It'll be high entertainment, if nothing else.

At 10:55, "If there's activity occurring around an area, we will actually go out to doors and knock on doors, introduce ourselves and let them know that there will be activity happening between this time and this time."

What if I miss the meet and greet? I'm not familiar with how training is normally conducted within our borders, but how is this considered realistic training when everybody's in on it?

because the intel gathering would be on roleplayers and not the public...just my opinion if that is what is going on...i dont think there is any unwanted civilian participation...so knocking on the door would just be a courtesy if there are visible units in the area or whatever that part of the exercise is..

Seems like a perfect opportunity for career criminals to wander around at night and if caught breaking in to a house simply give the excuse they're from such and such special forces unit. There are so many scenarios and problems with the whole concept of training in a civilian environment it is the biggest reason I question the basis for it. If this were useful and safe training why haven't they done it before?

Our government has earned the mistrust of the public.
Now they must live with the fruits of their deception.

What is the intention?

posted on May, 10 2015 @ 04:58 PM
link
It will cause disruption for some! Remember y2k, the 911 bombing. People freak out. I'm from a rural town in Arkansas. Just with the threat of y2k, people were lined up for a mile to get fuel for vehicles. The water, powdered milk, bread, beans and rice were sold out at every store in our area. You can bet there are already folks stocking up on guns, ammo and bottled water. There are always going to be those people that wait until the last minute of a potential threat to prepare themselves. Those are the ones you gotta watch out for! I personally say, "stay prepared cause ya never know what's gonna happen"!

originally posted by: SkipperJohn
What is the intention? Like I said before... they have plenty of land and as others pointed out, they even have fake towns setup.

What is the intention?


This is my question too...from my theory I think it could be that they need a real population to blend in the roleplayers. Another thing that is interesting is that this is indeed pretty large scale in terms of area. So why do they need such a large area is the biggest question for me.


To borrow the words of another, “What we have here is armed military in civilian clothes, driving civilian vehicles, conducting suspicious activity in public places.” Seriously, what could go wrong?

Your above statement says it all.
Thanks for posting this great thread.
Regards, Iwinder
S&F

If this were useful and safe training why haven't they done it before?


My first guess is the conditioning of Americans to an increased local military presence. Not only has it not been done before, but there are going to continue training on a yearly basis.

They are preparing for the near and eventual collapse of our currency and stock market. That is the only thing I can see as predictable and worth developing sound strategies for. An earthquake would be less predictable unless they know it's getting close and have the means to set it in motion.

Here's a scary video that I was reluctant to make another thread for. Kind of changes the tone if these AD systems are linked to Jade Helm. I hope someone can come along and explain what they're up to.

An All News Pipeline reader has emailed us the photograph above as well as the 1st video below which show a US military convoy with microwave weapons units taking a break while heading west on I-80 near Reno, Nevada.

They have live training in Iraq and Afghanistan. I do not see what some small town can offer them. From what I was reading, they are going to practice jumps from a chopper.

They have live training in Iraq and Afghanistan. I do not see what some small town can offer them. From what I was reading, they are going to practice jumps from a chopper.

Jumps from a chopper sounds like complete bs haha....ya I really have no clue...I just saw the "master the human domain" patch or whatever it said and it got me thinking of human intelligence and all the changes that have gone on in the last several years...especially some things going around in micecp. I could see sf picking up human intel. There was an article awhile back about the cia hiring all these ivy league guys to be case workers...well these ivy league guys just didn't have the knack for case worker jobs....getting very few spys for us. So they started mixing it up with some ex military guys who maybe had a degree from a lesser school or no degree at all and found they were doing way better in the field. So I just gonna hopped on the idea that it could be human intel but I have no clue really...but the helo jumps cracks me up and id wager there is no way that is the case...because the usa has bases in every type of terrain already so what would be the need for the terrain selected...but interesting though.

None of it really makes any sense.. but if their intentions were bad, why would they announce this months in advance and tell everyone what they're going to be doing?

Oh and the military did a exercise in North St Louis a few years ago this included military units from Maryland, sort of interesting that both North St Louis (Ferguson) and (Baltimore) Maryland are having issues with civil unrest, lets hope its not a trend that continues.

Did any of you even notice the yearly training exercises in the past?

Some people just aren't happy unless they have an irrationally perceived threat to fear.

originally posted by: usernameconspiracy
It's really amazing. These annual exercises have been going on since, what, 1993? Yet all of the sudden, in 2015, it's a big deal?

Did any of you even notice the yearly training exercises in the past?

Some people just aren't happy unless they have an irrationally perceived threat to fear.

It's just that after six years of yammering from the right wing echo chamber you hit a critical mass of loopiness. This exact same thing happened at the end of the Clinton administration with some of the exact same players like Worldnetdaily involved. Remember all the hysteria online about how Bill was going to use Y2K to establish martial law?
edit on 11-5-2015 by DelMarvel because: (no reason given)