I don't see what the big deal is.

Aliens fly around and if anyone wants to put in the time they can figure that out.

...Except scientists. And astronomers. And basically anyone credible, apparently. Those tweets are translated by Google so they're probably a bit off, but he's claiming the new photo is actually a painting. Guess no one gets the bounty.


I expected nothing less, I'd be surprised to learn anyone else did either.

Here's the thing, when you cast your lot with what you believe (you can make a buck off or get famous for) rather than with what you can prove, you end up looking, well, like this.

While it's MUCH, MUCH, MUCH easier (and usually more profitable in most of these cases) to promote what you want to believe versus what you can prove, it always, no, I mean ALWAYS, bites you in the ass before it's over.

Especially when you separate people from their hard earned money.

It's also despicable in my mind, but, who am I?

I'm just a guy who is a co owner of a website who believes in the TRUTH. Whatever the TRUTH may be...

In that light, I'd like to add that what transpired here on ATS, the RoswellSlideResearchGroup.com, and other sites that nailed these slides for the phonies they are makes it all worthwhile.

Let's keep the light on these wannabe hucksters, whether they are intentional hucksters, morons, or useful idiots doesn't matter much IMO, as long as "WE" can continue to prove the truth. .

We just need to continue to always seek out the TRUTH and DENY IGNORANCE as was done in this case.

That said, it's still my dream that we may find, come across, or have posted on the site, that one case that defies all explanation. It would be a huge bonus if it wasn't 50 years old too.

originally posted by: IsaacKoi
One of my fellow members of the Roswell Slides Research Group, Jose Antonio Caravaca, shared a new (and clearer) photo of the mummy earlier today. He has now posted that photo on his blog at the link below. (I expect details to follow fairly soon): 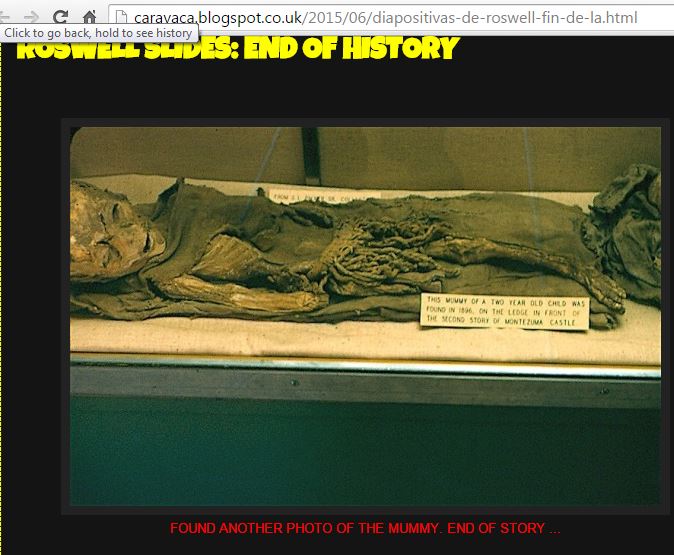 Another researcher (Anthony Bragalia, previously one of the most outspoken proponents of the "Roswell Slides") has posted a brief item on Kevin Randle's blog about the source of the photo that Jose Antonio Caravaca shared online yesterday (apparently originally found by Jorge Peredo):

It appears that the relevant photo was uploaded in 2008 to a Picasaweb album at the link below:
picasaweb.google.com...

It will be (mildly) interesting to see how Maussan responds to this 2008 source, given that Maussan has made repeated unqualified statements that the photo supplied by Jorge Peredo was a fraud and a painting clearly created in Photoshop in an attempt to debunk his event in Mexico unveiling the "Roswell Slides" on 5 May 2015.

Given that both pictures appear to show a body in a very bad state of decay I'd like to know why anyone even thought this could have been an alien found at the "alleged" Roswell crash site. How did it end up so badly decomposed like that if the picture really was taken in 1947? Or does someone need to rewrite the Roswell story again?

Anyway god rest that poor little child. He had no idea that, in a future he would never live to see, people would be labelling his remains as something alien. People who ironically were unable to read the label next his body.

Anyway god rest that poor little child. He had no idea that, in a future he would never live to see, people would be labelling his remains as something alien.


Fame is fleeting. Every dog (finally) has his day.

posted on Jun, 11 2015 @ 07:06 PM
link
The "Roswell Slides" story may have been a bit shorter if the slides had been annotated in the same way as Frank Hadl's slide of the same "alien"/mummy.

Frank Hadl took a photo of that "alien"/mummy in December 1956 when he was in the Air Force - and annotated it as being a "mummy, at Montezuma Castle" and recorded the date of his photo as well ("12/56"). Label your slides people...

Following up on Anthony Bragalia's post mentioned above giving a link to a Picasa web album, I contacted the owner of that web album today. Her husband (Frank Hadl) emailed promptly emailed me and confirmed that he took the relevant photo in December 1956. 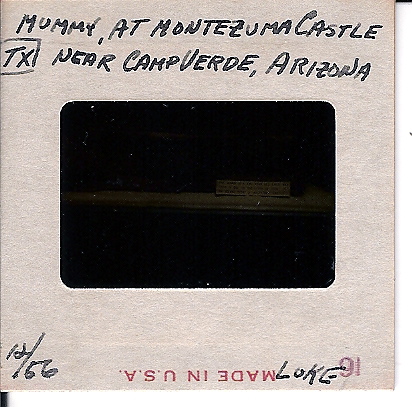 I'm curious. Why does this placard not match the smart deblurred placard?
edit on 12-6-2015 by thepixelpusher because: (no reason given)

posted on Jun, 12 2015 @ 01:54 AM
link
With such false proof and money making "ufologist" there is no need for disinformation agents. I am interested in exploring this subject and for last 20 years i have seen only fraud after fraud. From all this "ufologist" any credibility for subject must go to Jacques Vallée and he stopped research. a reply to: IsaacKoi

I'm curious. Why does this placard not match the smart deblurred placard?

Taken at a different time. Display has clearly been rearranged. You can still see the donators name, S. L. Palmer of California, on the label behind the mummy.

I'm curious. Why does this placard not match the smart deblurred placard?

The new image (i.e. the photograph taken by Frank Hadl) was taken at Montezuma Castle museum in December 1956.

I can't be sure when the original "Roswell Slides" images were taken, but you will probably know that the promoters of the slides claim they date from 1947. Those images seem to have been taken at the Mesa Verde museum before the mummy was moved to the Montezuma Castle museum.

So, it seems that the placard was replaced in the meantime (possibly as part of the move to the Montezuma Castle museum).

originally posted by: kita0dtita
any credibility for subject must go to Jacques Vallée and he stopped research

A small correction kita0dtita : Jacques Vallee is still active to some extent in UFO research. I had an interesting few lunches and dinners with him and a few other UFO researchers last summer, during which we discussed some ufo research projects.

Not only is it a photo of a shelf that's had an alien Photoshopped into it, but those dastardly disinformation agents time traveled back to 2008 to upload it to Picasa, and they constructed a fake slide mount!

I am beginning to think that Mr Maussan is suffering from some kind of mental impairment or that the more likely reason is that he has to let the show go on in case he gets sued.

This isn't even about the de-blurring of the photo. That was the killer blow, yes.

But the whole story is built on the most tenuous links and the weakest of evidence. A couple (the Rays) who seemed to be well connected, friends of the Eisenhowers, visited the Roswell area back in the late 40s. They left some slides of their excursions after their death. So then someone puts out a story that one of the pictures looks like an alien from the Roswell crash. That is about all there is.

Why would the body still be in the Roswell area when the picture was taken? Surely the bodies were placed in coffins from the local mortuary as the story goes and then transported away....

If it was not long after the alleged crash then why is the body obviously in such a terrible state of decomposition? It looks like years of decay have rotted it.

And then there is the obvious question. Why does it look like a mummy in a museum case rather than an alien in a sealed secret facility?

I don't think Ray Santilli has ever owned up about his Alien Autopsy fakery from 1995 either.

So why expect Maussan to?

It's all just so absurd, isn't it?

Further to a FOIA request by researcher Shepherd Johnson, the National Park Service has released 186 pages of documentation concerning the Montezuma Castle / Mesa Verde child mummy. As Shepherd has already mentioned on Facebook, the documents can be accessed here:
www.nps.gov...

The material is in PDF format here:
www.nps.gov...

Just for ease of browsing and sharing on Facebook, I've converted the Roswell Slides material provide further to Shepherd Johnson's FOIA request into a Facebook album (with a title, and a description, giving credit to him - of course): www.facebook.com...

This material includes further photos of the mummy. 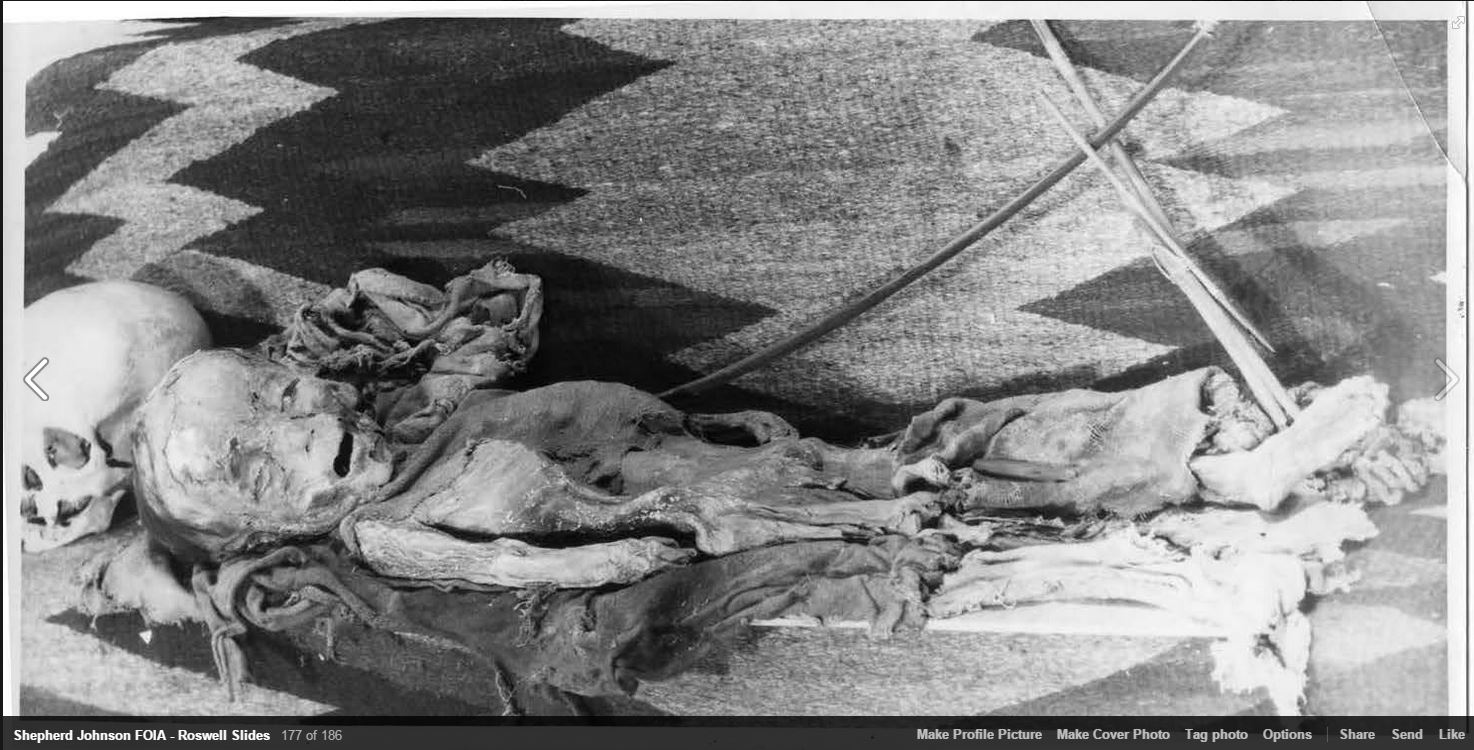 posted on Jun, 13 2015 @ 08:05 AM
link
Jose Antonio Caravaca has put together a nice article that includes this new FOIA material from Shepherd Johnson.
It serves as a fitting finale to the Slides story.
The article is in Spanish, but there's a built in translator at the bottom right of the page.
ROSWELL SLIDES: OFFICIAL CONFIRMATION. It's a mummy