originally posted by: buster2010
He got Bin Laden.

Okay, THAT actually gave me a chuckle.

Hey Sir Robin almost stood up to the Chicken of Bristol

I'd like to give you an ok to that, but the 911 Coincidence Theory guys keep bugging me for "proof" and they refuse to accept the video evidence so a "dead" Bin Laden with only a kiss and a promise just don't cut it here. Hey wait a minute, home come the Conspiracy Theorists acct the Bin Laden crap with absolutely zippo? I've been screwed!

originally posted by: buster2010
He got Bin Laden.

But his best is the

For showing us how to push the envelope on Executive Orders.

For humbling us Christians to get off our "high horse".

For the most transparent Presidency....ever.

For change we can believe in.

Besides being true that is an insult to the American process, the American System, and to every American as an individual as well. There were literally thousands of good choices out there and out of all of them they went ahead and picked this idiot whose resume was clearly insufficient to do the job that was required. Unless of course, the job was to do.....exactly what he is doing. Now THAT is a frightening possibility isn't is. To what end we can only imagine. If something insidious happens, (besides the TPP), while he is still the King, why then perhaps there will be an explanation. If NOTHING major occurs then it has all been nothing but a piss on your leg insult to the American people.

True, but if they, (not us), give it to the Real Mr. Clinton, we are More likely to see 8 more years of parasitic degradation of liberties, freedom, and the economy. If they give it to Bush, we will have another "terrorist" success and more no-bid- contracts to Dick Cheney, George I and George II. Depending on which of the two really bad "choices" they pick for us we will either have more of the same, or if we get lucky, more of the same. As time goes by I understand more each year why they whacked JFK. Womanizer that he was, corrupt criminal father that he had, every single "president" that we had since his removal was crap, garbage and dung. Though Ronald Regan did speak entertainingly while he was hosing the world.

Well then, I'm wearing a titanium cup, my sword is drawn and I'm laughing like a hyena. I bet you didn't want to know about the cup lol.

Yes and a good laugh at that my friend. My sword is also drawn as you can see. None shall pass.

posted on May, 9 2015 @ 09:58 PM
link
I'll give President Obama credit for one thing: he opened a lot of people's eyes to the fact that there is little difference between Republicans and Democrats.

After eight years of Bush, people really expected hope and change with an "outsider" Democrat president. When they got the bank bailouts, more war, more torture, more spying, more corruption, etc., many began to see the light and recognize the illusion of Republican vs. Democrat.

posted on May, 9 2015 @ 10:04 PM
link
I would love to shake the mans hand and say a big thank you for making people blame you for everything, its been a great 6 years of comedy by fox and the viewers, i am so happy i have another 2 years of punch lines.

You sir, have hit the preverbal nail on the head. Now if the general masses out there can only realize the truth in what you have said then perhaps we have a chance.

posted on May, 9 2015 @ 10:16 PM
link
I appreciate that he is a person that needs to be saved like all of the el ites, and that he's only put alot more bad things on his soul in his current position and needs to seek within to break free.

I call for audible vote, all in favor?

I laughed so hard, I actually did a little wee...........my wife now has all the evidence she needs that I am a loser with very little social life outside of ATS - I feel sorry for her.

Cheers and thank-you so much for a thread with content I was not expecting.
edit on 10-5-2015 by Sublimecraft because: beer helps.

posted on May, 10 2015 @ 12:37 AM
link
He has done some good, I mean we can at least hope for a little bit right, lol.
I believe 90% of Americans now have health care...sure it's a work in progress but it's a right step.
Our gas prices have stabilized...not sure if he is behind that or not but it can't hurt

Ya that's about all I got

posted on May, 10 2015 @ 12:51 AM
link
We got another dork that once again proved to America, if you're nothing more than a slick used car salesman then even you too could become president of the United States. 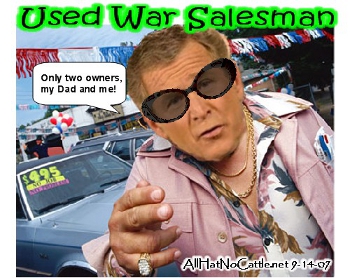