The Roswell Slides: Fake or Fake?

The placard in the "alien body" photo can be read and solves the case, killing it stone cold dead.
The Placard of the Roswell Slides: The Final Curtain 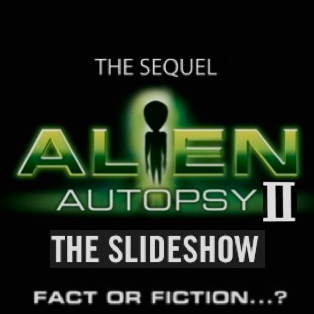 Not so fast,say Adam Dew and partners...
Slidebox Media LLC claims that the Roswell Slides Research Group has faked the placard picture.
Accusation: Fake Placard
edit on 9-5-2015 by CardDown because: picture

So ... the alien body was in fact a two-year old, mummified, human boy.

The way I see it one group is using a blurry picture to debunk anothers blurry picture. And people are charging 15 bucks to see the original slide?

Mainstream "Ufology" has sunk to a new low.

There's a couple of members here who have seen it so hopefully they'll respond.

I cant get them any bigger for some reason
edit on 9/5/15 by SecretKnowledge because: (no reason given)

posted on May, 9 2015 @ 01:15 PM
link
I'm so sick of this Roswell slide crap.
There are too many avenues to take for those going the deceptive route with things like this. Something definitive with undeniable events occuring plus multiple witness observation needs to happen or else it can be easily written off like these slides, no matter if they are indeed real or not.

As far as concrete evidence and official disclosure, a presentation of alien slides or other likeminded ideas for disclosure are not a method that would convince the majority by any means.

That would be telling.

In an attempt not to submit a low-content one-liner post, let me say that these alleged Roswell Slides Research Group scoundrels don't seem to have much of a plan.

Are we to understand,that their scheme is to place a nefarious sign on a mummy...
labeling it a MUMMY?

I've come to the conclusion that Roswell is whatever people want it to be.

Starting with this headline. It is proof of an alien cover-up to many. Even though the term "Flying Saucer" had only just been coined days before. It certainly didn't have the widespread association with alien technology as it came to in later years

Looking at at a newspaper a day later. It says the debris was made of rubber, tinfoil, paper, tape and sticks from the man who found it Mac Brazel.


Curtains for the Roswell Slides

posted on May, 9 2015 @ 02:49 PM
link
Funny, I have seen that mummy three times in person. Anybody who ever visited the "Million Dollar Museum" in Whites City, NM has seen that mummy in person. It was a neat museum at the ingress to Carlsbad Caverns National park.

Sad that it is gone now.

I've come to the conclusion that Roswell is whatever people want it to be.

Yes indeed. I think our problem is that we human beings have a great propensity to decide on what we believe in and then forever filter out what doesn't fit in favour of bias confirmation with what does. Never questioning if that bias is actually wrong.

posted on May, 9 2015 @ 05:37 PM
link
What is amusing is that even in the original blurry image (and this has been pointed out elsewhere), you can still manage to make out "OF" and "OLD BOY." Slidebox doesn't have a damn leg to stand on.

originally posted by: SecretKnowledge
So here they are

I cant get them any bigger for some reason

posted on May, 9 2015 @ 06:24 PM
link
This would seem to settle it. Dew claimed they were using a faked image, so the RSRG guys did it again using the placard image from Slidebox Media.

There’s some overlap in this material and another demonstration video to come.

These new versions are important in the sense that they use the image Dew himself provided to clarify the placard. Not magic, but you can see it well enough to read some of the mummy information.
edit on 9-5-2015 by CardDown because: spelling

posted on May, 9 2015 @ 06:47 PM
link
The big loser in this fiasco is Richard Dolan. We expect hoaxes out of Maussan, Carey & Schmitt, but Dolan was supposedly a shining light in ufology. No more, if he ever even was. After hitching his wagon to this hoax, his reputation is shredded. We can now put him in the "Bad Ufologist Box". reply to: CardDown

I'm trying to replicate the results in that video but not having any luck. Is there no audio? Do you know how the 2nd image he loads in was created? That would probably help.

Here are the links to download SmartDeblur and the placard if anyone wants to give it a try.
edit on 5 9 2015 by CosmicRay because: (no reason given)