My two cents worth is there was trade where ever trade could be established. The Polynesians certainly got around, that's for sure.
Some of the South American stone heads showing Asian or African features seem to point to far flung interactions.


According to a new study, researchers believe that the ancient Chinese discovered the American continent 2000 years before Christopher Colombus.

Trade between Eastern parts of Asia and the New World is believed to have taken place much before Christopher Columbus arrived to the “New World” changing history books .
Now, researchers propose several new theories that can change history as we have been thought in school. Long before the arrival of Spaniards, the Native Americans were in contact with other great cultures which include: China, Korea and the region of Yakutia, Russia. These exchanges would have taken place 2,600 years ago, marking the date of Columbus’ arrival as something ordinary and not as a historical date like we have been told in history class.

You dare slander the name of our bellowed LOL

Yeah they did get to America, even coins were found in the past. But they didn't stay in numbers, probably first settlers were seen as aliens and killed.

posted on May, 8 2015 @ 06:05 AM
link
There's no doubt that others reached America long before Columbus, but 2000 years seems to really be stretching it. I'm going to have to look more into this. Thanks for the info!

The Peri Reis map would suggest the Earth has been circumnavigated in our ancient past and there are numerous threads on ATS by Slayer and others giving strong evidence of same.

This latest evidence that America was "discovered" by the Chinese thousands of years before Columbus is just one more piece of our true historic puzzle and it is my opinion that our history books and what is taught by mainstream academia in this regard is simply incorrect or inaccurate.

Really really wish they didn't torch the Library of Alexandria as it probably had texts and scrolls that could tell us about our real history.

Very interesting, S&F for raising the topic... but I don't see any evidence for this. Have any artifacts been found that show their Chinese origin? If they have I have not heard of them and I'd love to read about it!

The Olmec didn't look African or oriental, they looked like native South-Americans still do: 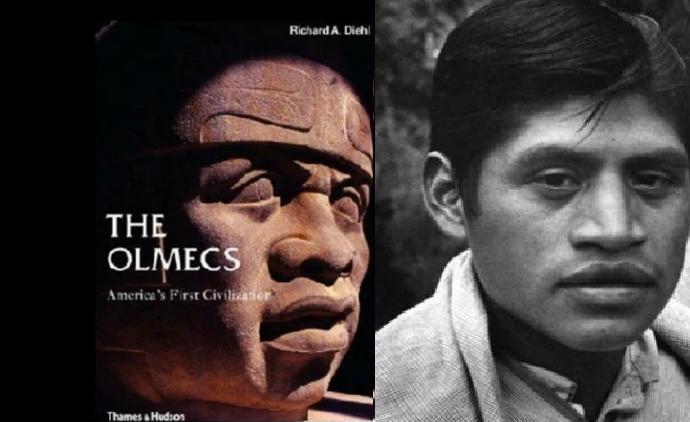 posted on May, 8 2015 @ 08:04 AM
link
I believe many past inhabitants of this world, discovered America long before even the Chinese, Columbus, Vikings, etc.... But that's getting into another debate about a civilization very advanced, a civilization who even mapped Antartica , while there was still a coast line. Sounds crazy but there are documents and maps that have been found to show this. Our history is being deliberately manipulated to fit the beliefs of Religion and that we are merely a few thousand year old species.

originally posted by: AdmireTheDistance
There's no doubt that others reached America long before Columbus, but 2000 years seems to really be stretching it. I'm going to have to look more into this. Thanks for the info!

How long have the Native Americans been here? They discovered the New World first, let's not forget, that's why they've been living here, after all.

posted on May, 8 2015 @ 09:29 AM
link
a reply to: 727Sky
Your source has cobbled together a number of different elements and created...nothing. Yes, Rising Whale indicates connection or trade in the first millennium AD. The rest is pretty much poop.

posted on May, 8 2015 @ 09:52 AM
link
I never understood how someone can "discover" a place where humans already lived. Columbus, which wasn't even his real name, took too much credit these past 500+ years.


agreed... the best date ...in my mind... would have been around 250 BCE after the first Emperor of a united CHINA

the fragmented war lord states of pre-China did not have the vision or resources to discover the ** "Amaruca" continent (or land of the feathered serpent, in Mayan)

: ”These Children of the Sun adore the Plumèd Serpent, who is the messenger of the Sun. He was the God Quetzalcoatl in Mexico, Gucumatz in Quiché; and in Peru he was called Amaru.
From the latter name comes our word America.
Amaruca is, literally translated, ‘Land of the Plumèd Serpent..."

It doesn't matter who walked on the land first or saw it circulating coastlines.. if that were the case, let's give the land back to the natives and animals, lol.

It's who reigns dominion, creates laws, brands a piece of land with a name that is resembled by artifical (made up) flags.

This is the truth, hence those from eastern seas had kingdoms, dominion over everyone, unaccountable wealth and knowledge .. Columbus was ordered to come here, he wasn't a free man, he had a king.

But let's excuse reality and what's really going on and nitpick who traded rabbit furs and pottery.. waste of time.

America is now an evil empire, interconnected by cabal of hell bent globalists. Dominion over the people, unaccountable wealth and knowledge. ... you get the point.

His story is over, that chapter ended. Let's focus on yhe his story that has been governing our lives and where it's headed..

Soon we will be history
edit on 8-5-2015 by Elementalist because: (no reason given)

Broken mobile lol.
edit on 8-5-2015 by Elementalist because: (no reason given)

originally posted by: St Udio
a reply to: AdmireTheDistance

Actually, America derived her name from the Latinized version of the first name of Italian explorer Amerigo Vespucci (Americus).

posted on May, 8 2015 @ 10:40 AM
link
Yeah so what. The Vikngs were here before him too. I don't think they give the discovery of America to Christopher Columbus any longer. Too much proof otherwise.b


originally posted by: AdmireTheDistance
There's no doubt that others reached America long before Columbus, but 2000 years seems to really be stretching it. I'm going to have to look more into this. Thanks for the info!

How long have the Native Americans been here? They discovered the New World first, let's not forget, that's why they've been living here, after all.

Actually they took the land from a previous people so they are not as native as they claim.

I have little doubt that there was likely trade from East Asia across the Bering Sea into Alaska and Northern Canada. I'm not at all convinced, based on the source though, that it was over 2000 years ago. It's a little suspicious that the article lists no citations or references to check its claims.

originally posted by: yuppa
Actually they took the land from a previous people so they are not as native as they claim.

Care to enlarge upon that?

posted on May, 8 2015 @ 11:31 AM
link
It's pretty well known now that the Chinese discovered America way before Columbus. When are they going to change the history books? I remember reading about it in the 80's, discussing it with my History teacher that someone found a ancient Chinese boat anchor on the Pacific shores of North America predating Columbus, however she could not teach that subject in the classroom, because it's not in the books....

The anchors have been proven to be from the 19th and early 20th centuries from Chinese immigrants from that time period. Not from prior to Columbus.


originally posted by: yuppa
Actually they took the land from a previous people so they are not as native as they claim.

Care to enlarge upon that?

I have stated that in many other threads and even linked to archaological proof of a previous people who were wiped out by the"native americans" Im not doing it yet again. Google it yourself.