Although this short read was slightly offensive, it was also smack to the face as if to say wake up. It strikes directly at myself and all my countrymen. That said if i only took in what I wanted to believe I will be making this guys point for him.

posted on May, 7 2015 @ 03:53 PM
link
That is rather a damning indictment by the author. As I am not a US citizen I don't feel I have the authority to talk about its internal problems. I do, however, recognise many of those points as being pertinent to my own country.

And the one thing that is absolutely undeniable is the use of media as some sort of panic/panacea, a fear all/cure all pill if you will, for control of the soul of the average citizen.

The fact that media is almost completely controlled by politically guided characters of course allows no surprise to be expressed at the agendas it pushes.

We truly need some sort of apolitical media across all aspects, print, radio, TV and internet. Elon Musk interested?

As for politics, I got a chuckle out of the evening news the other night when they were getting on hillary because some of her campaign contributions where made in exchange for political favors.

LOL, we all know that's EXACTLY what EVERY DOLLAR IS FOR. Yet apparently when someone actually gets "caught" we are all supposed to act surprised and outraged.

What a surprise, another callout with ridicule grouping all Americans together. Yet no where in the article is there a suggestion on what to do only ridicule.

This thread is completely pointless except American bashing and baiting. 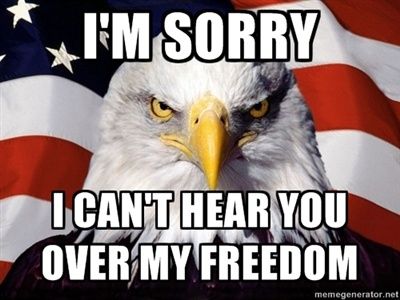 If he can't even begin to posit some sort of solution to the great swindling and intentional dumbing down of the American Public then he is just b****ing like everybody else. Most people know their politicians are corrupt, and quite a few even know that their politicians are simply mouth pieces for corporate interests. Most Americans know that their schools have failed them and will fail the next generation even more, and that the media is a propaganda tool not a truth teller.

posted on May, 7 2015 @ 04:40 PM
link
Too bad most Americans won't change. The same political leaders will be back to lead us down the same old spiral.

The police won't even admit they have a problem with some of their personnel and keeping Americans in decent jobs isn't even an option any more.

When I was a foolish lad, I thought the USA had a special kind of freedom that the rest of the world was striving and failing to reproduce. I grew up.

I still run across many people that will put the flag out there like it stands for something more than betrayal. Change is not possible with those people clinging to the belly of the beast.

News Flash USA in not the only free country in the world nor is it the most free.

You act as if America is the ONLY country with freedom.........how arrogant.

posted on May, 8 2015 @ 03:54 AM
link
In another thread, addressing some of our challenges as americans, in the way we regard and respond to our governing systems, I said it is easy to poke and mock us, but that is ineffectual. It might serve one to stroke their own sense of superiority, but without comprehension of the problem, no solutions can even begin to emerge.

Some of the points are valid, some are a bit twisted - I could rant and rave that the typical CEO doesn't have any idea how to change the oil on his car, they are obviously idiots, then, right?

Graduating high school may happen in smaller numbers, but let's not mention that we started thinking it wasn't such a good idea to give diplomas to kids who didn't know how to read or write. We decided to raise the bar on that.

I have found a lot that could be criticized about us, through brutal self examination, on the other hand, I think the analysis of what the roots are, how they formed, and how they might be changed is more important than doing this scathing mockery.

It also only serves to provoke us into a position of self defense - not reception or consideration of the points made.
So we might sound like closed minded idiots in response - but I guess that is exactly what you wanted to provoke us to act like, isn't it?

People are more capable of listening to someone who proves they are speaking from real and sincere concern for them, and frankly, I embrace that tendency. No valid reason to take seriously a person with criticism who only has their own ego caressing in mind. THAT is stupid, I think.

Truth if I ever saw one.

They can burn entire cities down.

posted on May, 8 2015 @ 05:08 AM
link
Read this recently ' War, how American learn geography' I could not help thinking that there might be some truth in that sentence.

I originally ignored this thread because the linked paper started off talking about homosexuality but I gave it another chance and read further. What really caught my attention was this quote because it's something I happen to agree with

If you truly had a democracy and did what the people wanted,’ he said, ‘you’d go wrong every time.’

When we elect someone we shouldn't be electing a person who represents our viewpoint, because there's no guarantee that we're right, given that most of us aren't experts on everything chances are we aren't right. We should be electing people who are good at problem solving, can find beneficial solutions, and are capable of listening to solid advisers who are experts. This is especially true of the President, regardless of the political realities of running the President shouldn't be a person who most successfully panders to the issues, it should be a person who can listen to the facts and lead the country in a direction. If the rest of the country doesn't then follow behind, it just means they weren't fit to lead.'

Congress is more about individual concerns but even then, why should my view on the TPP be something that needs to be reflected in Congress? I don't know all of the minute intricacies of international trade. I may be a little smarter than the average person on that subject (or perhaps I'm not) but that just gives me an individual opinion. The people who are the experts are the ones that should be determining policy.

All too often I find that the average citizen not only can't come up with a good answer to a question, but often times doesn't even understand what the question is. When that's the situation how can anyone really be qualified to make a politician commit to a particular course of action through the course of an election? Voting for people is a lot like hiring a person to do a job that you don't know how to do. It should be about figuring out their qualifications and seeing if they can do the job, not making them conform to your preconceptions about how they should do things.
edit on 13-5-2015 by Aazadan because: (no reason given)