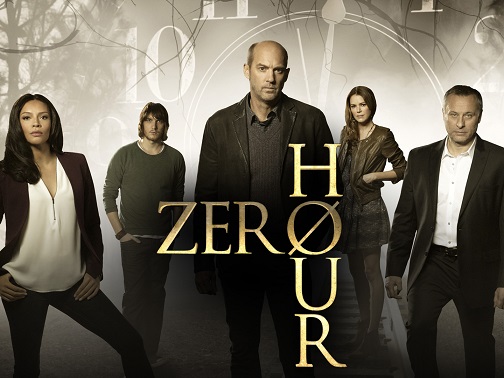 So I happened across this show on Hulu the other night after watching the latest episode of The Following.

I watched a few minutes of the pilot and was immediately hooked. It's a really good conspiracy show with all sorts of great elements. You got Nazi's, Christians, Secret Societies, holy relics, end of days doom porn...ect. The rabbit hole seems to be pretty deep on this one.

Unfortunately it looks to only be one season as it originally aired on ABC, but was canceled after 3 episodes due to poor ratings.

I just finished up episode 5, so I still have a few episodes to watch. If your looking for a rabbit hole to jump in for a lil bit, I recommend checking out Zero Hour on Hulu or where ever you may find it.

Two thumbs up so far.

but yeah got cancelled and they have never had any other network pick it up.

If you like Zero Hour you will also love this

edit on 7-5-2015 by OtherSideOfTheCoin because: (no reason given)

Every now and then you get an absolute gem on the tv and it looks like you found yours. If I see it at all (we have Sky) I will let you know.

Some time ago in the UK we had a fabulous classy vampire series called Ultra Violet. I was gutted when it finished but one of the main actors died I think and obviously the programme deciders said no more. Sad though.

originally posted by: EnigmaAgent
Was it on Sky. Looks a decent show. a reply to: OtherSideOfTheCoin

I don't know if sky aired it or not you might be able to get it on netflix.

posted on May, 7 2015 @ 03:23 PM
link
Same with The Event. Thought that was a real good show. You have to wonder why some of these don't make it any longer. Are they put out just to send a message or are they shut down because they are sending to much of a message.

originally posted by: Klassified
a reply to: SgtHamsandwich
Cancelled after 3 episodes, and you're on episode 5???


They had made most of the 13 episodes when it got to episode 3 and then the network binned it, however after that it was still broadcast on some random channel that had rights to it somewhere in the Europe. That is why you can be watching episode 5 right up to the last one.

It was one of those rare conspiracy series that not only entertains but also makes you think a bit.

Gone are the days when series like X-Files, Twin Peaks, even Star Trek are allowed to build their audience. If the numbers watching episode 1 don't add up then the advertising revenues are not there. Sometimes they are given the wrong slot and it kills them. Everything has to be instant these days or it fails. But some series also lose their way after a few seasons.


Another one I quite enjoyed for it's quirkiness was "Happy Town" which got finished after just 8 episodes.

Again that is available on Amazon Instant Video

It's weird, funny and also intriguing. Well worth a watch for people who like Twin Peaks.

ETA : Happy Town is also available on Youtube for £1.89 an episode.

And finally another one that Amazon have made a pilot for is completely free to watch.

The Man in the High Castle.

It's based on Philip K Dick's novel set in the 1960s after the the Allies have lost the War.

PS I do not work for Amazon and am not necessarily choosing to promote it. But it does seem the only place you can legitimately watch these programmes. They may be on other platforms I don't know about.

I suspect this type of programming may become net based first rather than after being aired on a major network. That seems to be the way it's going.

originally posted by: HawkeyeNation
Same with The Event. Thought that was a real good show. You have to wonder why some of these don't make it any longer. Are they put out just to send a message or are they shut down because they are sending to much of a message.


The top brass in Hollyweird can be fickle. Even a good show can be pulled just because they're not particularly fond of it. The Event was interesting. I doubt they could have kept it that way past 3 seasons, but I would like to have seen it go at least 2. Maybe they could do a mini-series picking up where they left off.

IF your bored, and in need of something to watch.

I was just on my second reality show last week. (First, my wife and I were on TLC's "A Wedding Story"). This one, we just happened to be in a restaurant where they were filming the current season of "Party Down South 2". Basically, it's Jersey Shore, but with rednecks instead. Kind of fun seeing yourself on TV, but this is such a bad show, lol....

(hey, the restaurant is just really well known for their burgers)...

Unfortunately it looks to only be one season as it originally aired on ABC, but was canceled after 3 episodes due to poor ratings

Wow, they only gave it 3 nights?

As you're on episode 5 though, I suspect they have the whole first (and only) season there?

Yeah they filmed an entire season, but decided after 3 episodes not to renew filming a second season.

I should have been a little more clear on how I worded that in the op.

posted on Jun, 21 2015 @ 04:34 PM
link
Is it really that good? I remember watching the pilot and forgetting about it. You're making me want to go back though, I think I might, nothing better to do!