posted on May, 7 2015 @ 12:27 PM
link
While many ancient religions have largely been forgotten by the Western World, there are still small areas dedicated to the practices. One of the greatest I've ever encountered has been Four Quarters Farm Interfaith Sanctuary. It recently made the news but my family and I have been members for quite some time now.

The author did their homework and stayed on site for a long enough period of time to really get an idea of what it's like there. It's really important to note that there is nothing extraordinarily idealistic or utopian about this. It's just folks who want to live their lives unimpeded by many modern trappings. Not to mention it's hard work. The few staff members who live and work there do a solid 12 hours of hard farm work, but tending to this beautiful space that so many different folks use for worship is a privilege.

Hidden in the state’s southern foothills, the sanctuary bills itself as a “safe and sacred ceremonial space for the modern practice of ancient religion.” An eclectic, 250-acre oasis, it includes a Native American Sweat Lodge, drum and dance circle, hilltop labyrinth, dozens of altars for worship and hundreds of campsites. And at its spiritual center, the Allegheny’s answer to Stonehenge — 47 multi-ton stones semi-circling an open-air altar. The stones were all raised by hand and are still growing by two stones a year thanks to a three-day, sweat-filled, community-wide tug of war called “Stones Rising.”

There are a half-dozen or so full-time residents of the sanctuary who live under monastic vows of poverty and service, but their community of support swells into the hundreds for their many Earth-religious ceremonies, such as Beltaine, Samhain and Yule. Though the variety of faiths on display at Four Quarters can appear disparate — members’ religious roots range from Afro-Caribbean and Neopagan, to Gaian and Druidic — they are nearly all nature-based, putting these forested foothills at the center of their spirituality. 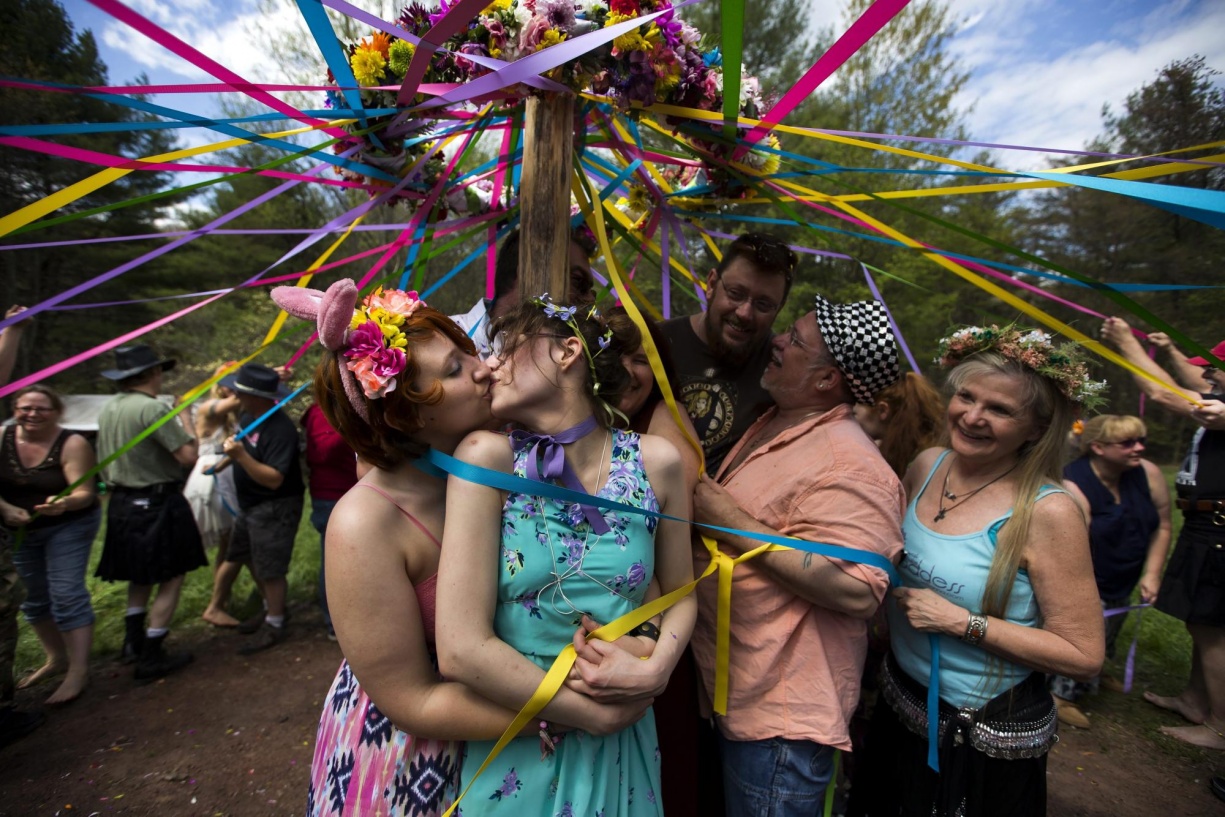 This was taken during the maypole dance for Beltane this year. For those unfamiliar it's to celebrate spring and it's mostly a fertility ritual. I suppose this is where I'll note that there's a hugely diverse membership and a large LGBT population. Stone's Rising. This is every bit as labor intensive as it looks and everyone who helps is a volunteer (as with all work done on the farm).

But, the camping's great, there's music and dancing and drum circles and fire spinners and ancient religious ceremonies of all types. Artists and acrobats and gun enthusiasts (yes, we have a gun festival), you name it, we've got it. The place is largely self policing, but anyone who comes in and disrespects the land or any of it's people is unceremoniously removed from the property in all due haste. Other than that, it's a great retreat from the more stressful aspects of life, and a true sanctuary for folks of all stripes to live openly for a while. Just figured I'd share since I know of no other place like it.

posted on May, 7 2015 @ 12:43 PM
link
Very cool! I'm always glad to see this type of community gathering for seasonal festivals.

Thanks for posting it.

No problem! The community itself rotates a bit, but the grounds and services are open to the public for the larger festivals. At the moment none of the events attract more than a few hundred people, but the few folks that do come around are the folks that keep the place going, since it's entirely run on donations. I always thought the financial transparency was good, you don't see that too often at a church. When the one picture ran in the news one of the comments below it was from a confused person who didn't seem to understand how a church could have gay members....fully illustrating why places like this are important. I wish folks who had questions would come out to visit though, there's a lot of misinformation out there about many of these practices. I think the reality would underwhelm folks expecting orgies and blood sacrafice or whatever folks seem to think goes on there.