page: 1
34
log in
join
share:
gortex
+15 more
posted on May, 7 2015 @ 06:11 AM
link
Archaeologists have found what they believe to be Capt Kidd's treasure recovered from the wreckage of the pirate's ship off Madagascar. 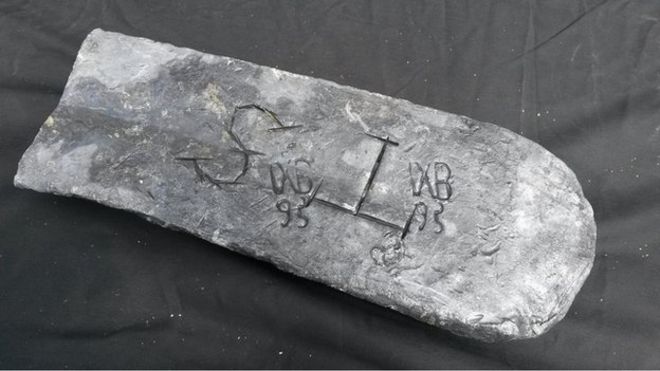 The 17th Century silver bar weighs in at a hefty 50kg.


Archaeologists in Madagascar say they have found what is thought to be the treasure of notorious Scottish pirate William Kidd.
Soldiers have been guarding the 50kg silver bar at Sainte Marie island after divers brought it to shore.
Madagascar's president and UK and US diplomats received the suspected treasure at a ceremony on the island.
Capt Kidd was executed in 1701 for piracy after returning from a voyage to the Indian Ocean.
www.bbc.co.uk...

That is way cool. There's still so much to be found.

A wonderful Maritime find and one that I personally hope makes it's way to Irvine (Scottish Maritime Museum) - this is part of our maritime heritage, all of us, and given that we all learned about this rogue (Aarrrghhh), and others, he shares equal awe, for me at least, with the likes of Vasco da Gama and others who sailed the 7 seas.

Thanks Gortex, very much appreciated.

Amazing find could you imagine holding it in your hands.

That blows my mind, there would have to be far more than just the bar.. far more.

posted on May, 7 2015 @ 08:23 AM
link
Thats amazing. I'm pretty sure they will try searching the area for more artifacts. They can petition the madagascar govt to cordon off the area so others don't flock to it and make new discoveries harder to find. The bar itself looks like it was melted and poured in a dirt cast. I wonder what the markings are? In todays market that is about $45,000 USD

I would arrgghh to be a pirate.

posted on May, 7 2015 @ 09:33 AM
link
Cool, I wonder how much silver was officially found compared to how much was actually found?

posted on May, 7 2015 @ 01:34 PM
link
Searching for sunken treasure is a dream job but I'm sure it's one that involves many many hours of boredom and disappointment followed by short bursts of thrilling excitement.

posted on May, 7 2015 @ 04:47 PM
link
A fantastic find, but it is unlikely that it is Captain Kidd's treasure. Kidd's ship, the Adventure Galley, was stripped and purposely sunk:

Adventure Galley succeeded in capturing two vessels off India and brought them back to Madagascar, but by the spring of 1698 the ship's hull had become so rotten and leaky that she was no longer seaworthy. She was stripped of anything movable and sunk off the north-eastern coast of Madagascar.

The silver bar was discovered off the coast of Saint Mary's Island (aka Nosy Boraha) near Madagascar. Nosy Boraha was an infamous pirate haven in the 17th and 18th centuries so the treasure could have been from any number of different marauding vessels. This makes me wonder why Barry Clifford (the leader of the team who discovered the booty) released it to the president of Madagascar. Madagascar would have no claim to the treasure - it would most likely belong to England or France. But why turn it over to anyone? Isn't the whole point of hunting for lost treasure is to keep it for yourself?

But its apparently Captain Kidds treasure because reasons.

I think they need a little more proof than that.