Actually, I knew you didn't, as I followed your posts in that thread..

Just seems to be a bit of an agenda here, and that screenshot fed into it.

Actually, I knew you didn't, as I followed your posts in that thread..

Just seems to be a bit of an agenda here, and that screenshot fed into it.


And yet no agenda in the original story? Just harmless over eagerness huh? What's more likely?

Probably was an agenda.

An hour later it was updated, what's the problem?

You're ok with a misleading screenshot though...

Probably was an agenda.

An hour later it was updated, what's the problem?

You're ok with a misleading screenshot though...


It's from The BBC isn't it? With them nothing surprises me. Still wondering how the news anchor knew building 7 was going down before it actually went down on 911.

I'm talking about the screenshot from Drudge.

This thread isn't about 9/11, why does this seem to happen so often? Thread deflection I mean..

My only agenda is answering the OP title "WHO LIED" - screenshot seems evident - MSM lied - you simply refer to it as "did not exercise due diligence" - I call it "lied" (Nuclear deal set for June), here and in every post of like persuasion I'll call it again - calling out propaganda promulgated on the internet, and in this instance I make no qualms about my support for the OP here and in particular Haman10 simply because we share a similar life philosophy and I have previously posted here on ATS (in that thread you were following actually) that I like this member - a lot...........and that's as far off topic as I will go. 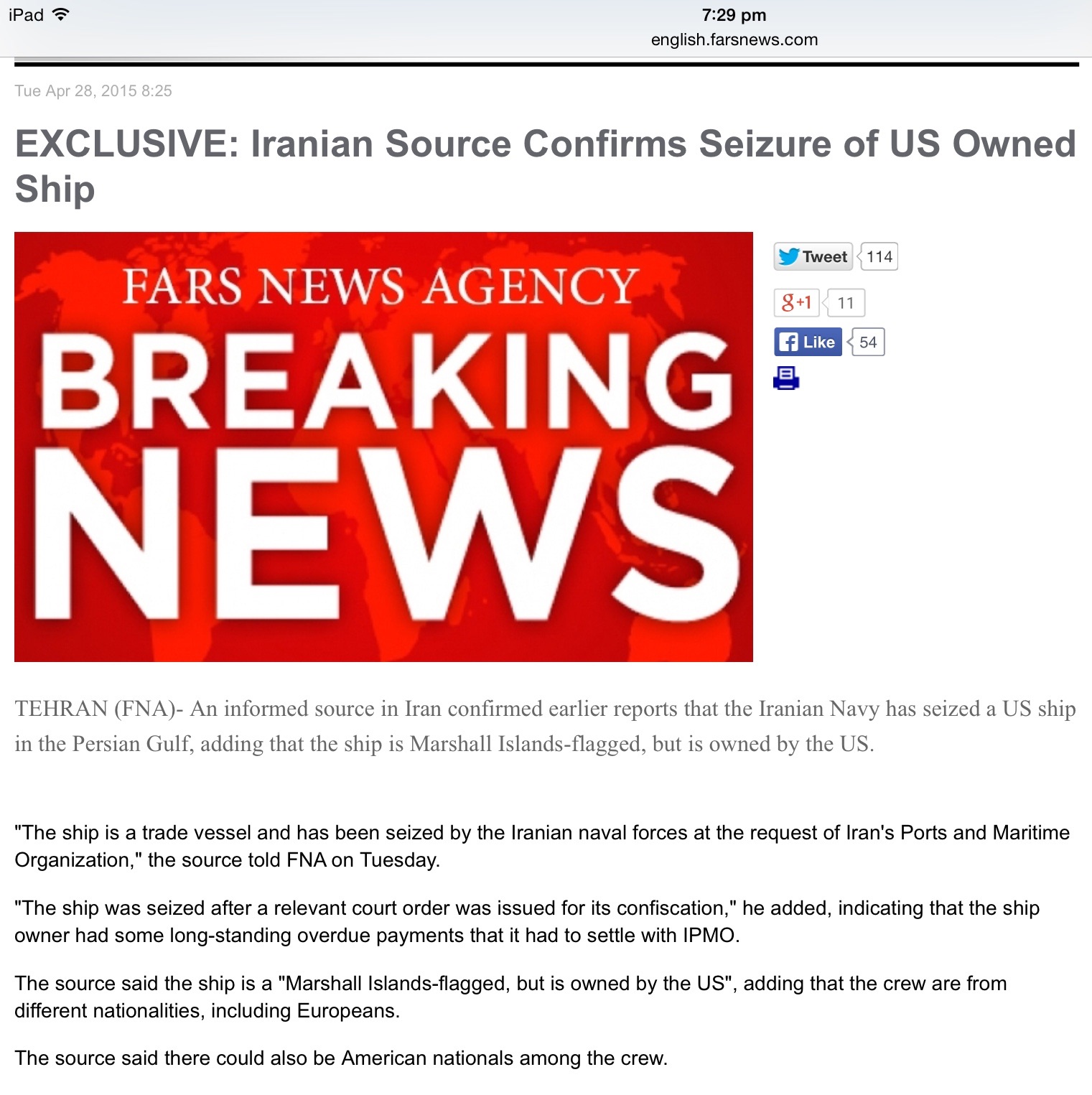 Why would they run the same story if drudge were lying?

Or am I right? News sources, western and Iranian jumped the gun and posted a story before all the facts were known

I'm talking about the screenshot from Drudge.

This thread isn't about 9/11, why does this seem to happen so often? Thread deflection I mean..

So I'm confused than. You acknowledge there probably was an agenda in the original story but question the motives of the OP for questioning the original story because of a screenshot from western media used by the OP. I feel like I'm chasing my tail.

You are correct - MSM lied.

The truth was manifested here, on ATS - alternative news site..

Source of that truth just happen to be me, fortunate enough I had direct maritime sources in the area giving me all the info truth seekers needed to know, and which I was happy to share.

All the worlds media is owned by but a few.

I initially was just asking the OP about the positioning of the ship, then sublime posted the screenshot, and here we are.

So far I've established that the OP is mistaken in the location of where Maersk Tigris was intercepted, established that despite the alarmist headline from drudge, they updated the story an hour later, and finally, that an Iranian news source reported the same thing as drudge.

Why am I copping flack for denying ignorance?

Indeed - I starred this post in support of the fact that the vessel was indeed intercepted in the Strait of Hormuz (Traffic lane) and then escorted to her final anchorage position - shown in the OP. Those are the facts.

I treat Drudge and Fars as the same - this is my personal opinion. I certainly don't want to give the impression of giving you flak but want to answer your queries best I can.

You have (and always have) my respect Chad as a fantastic contributor........albeit one I rarely agree with, but that is beside the point, I appreciate intelligent discourse.

Why am I copping flack for denying ignorance?

Why would they run the same story if drudge were lying?

Or am I right? News sources, western and Iranian jumped the gun and posted a story before all the facts were known


Fars news just copy pasted the news in saudi media like other news agencies did .

confirmation usually comes later . in these situations , news outlets trust each other .

All sources, even FARS, ran the Saudi story. The Saudis did the lying and no one fact checked them.

posted on May, 7 2015 @ 12:42 PM
link
Bit of a weird one here. Just found an item on whatreallyhappened.com concerning the Tigris, which on the "live" ship tracker, shows the ship docked in Columbus, Ohio!

This story was just simply yet another perfect example of western propaganda machinations doing their thing.

The beauty in all of this is when the real truth of the matter comes to light (as is the case with this particular scenario)... it causes a lot of people who would normally gobble up the propaganda with a smile on their face to pause, take a step back, and raise their eyebrow. Thus bringing into question all the crap they've been blindly believing most of their lives.

I love nothing more than to sit back and have a good laugh watching the puppet masters backpeddle from their own corrupt lies when it comes back around to bite them in the ass.

Right or wrong, the quintessential bar room machismo and NASCAR intellect of Muricans won't allow for many apologies. To them, there is no authority to acknowledge anywhere else in the world. Bombs and cruise missiles ARE the answer to every question.

Thats true . propaganda is very very dangerous , as apparent in this case it can blind people out and cause them to think irrationally .

Iran is the real Devil in the eyes of mainstream media and it matters not who is right and who is wrong . Iran is for sure the bad side to the story .

My friend , firstly your avatar creeps me out : )

secondly , i really hope what you said is not true .