Voters championed a change in government on Tuesday, handing the Alberta NDP the keys to the province in a historic election that brought a swift and decisive end to the Progressive Conservative party's 44-year dynasty.

The NDP won in 53 ridings, followed by the Wildrose returning to Official Opposition with 21 seats. The PCs were decimated, losing several high-profile cabinet ministers and only returning with 10 seats. The Liberals captured one seat, as did the upstart Alberta Party.

I wonder what the Vegas odds on that were.

This is a HUGE boon for the NDP, coming as it does so closely to the federal election. Those that thought that the upshoot they took in the last election was a fluke will rethink that. This will be an interesting year.

posted on May, 6 2015 @ 11:47 AM
link
The only party I've ever voted is NDP. However, don't vote at this point and have to wonder, what changes are in store, will it be Canadian style, Nordic style Equality and Freedom that the NDP traditionally stood for, or is it going to the the NWO version?

Oh no, you guys got the socialism over there?!?!
Well I guess more of it

Probably means your government is going to kill everyone like the Nazis.

Everyone is commenting on how shocked they were but the polling was showing that something was up .Those Wild Rose MLA that crossed the floor to the PC's must really be feeling dum dum dum . The big boy PC Prentice will be leaving some bad taste in the die hard Con's with his "don't want to play if I cant be King attitude . The Province should bill him personally for the cost of holding another election in that riding . When Jim Prentice came out of the Bank to lobby the First Nations for the oil industry they said , "Too Little Too Late " I am thinking that like the Natives toward Prentice that the rest of Canada will tell King Steve "Too Little Too Late in the next election . But a good day for the NDP across the country .I just hope that this helps in the next Federal election for them ...time will tell .

originally posted by: Unity_99
The only party I've ever voted is NDP. However, don't vote at this point and have to wonder, what changes are in store, will it be Canadian style, Nordic style Equality and Freedom that the NDP traditionally stood for, or is it going to the the NWO version?

My Swedish inlaws are amused that, as they are running away from Scandinavian style socialism, America is running towards it. We're 30-40 years behind the times, in their opinion.

originally posted by: SlapMonkey
a reply to: intrepid

PC's and the Conservative party(which came about when the federal PC's became defunct and united the Alliance and Reform parties) are conservative. The Liberals are, yup, liberal and the NDP are further left than the Liberals.

posted on May, 6 2015 @ 02:45 PM
link
A) This election completely debunks the myth that our "votes don't count"...well, at least in Alberta provincial politics.

B) The Alberta NDP is no more left than the Liberals. They are very central in comparison to the federal NDP Party.

C) Smear campaigns and $hit flinging politicians aren't very well liked in Alberta. Prentice really lost the vote when he went arrogant to the voters (look in the mirror), followed by condescending to the competition (how's the math now?). Notley displayed a great deal of class in how she dealt with Prentice's shenanigans, and has been reward for it.

D) If history holds to form, the PC's are done in Alberta. No Alberta political party has lost their majority and returned to power at a later date.

E) Wild Rose is just as screwed if they don't get back towards the middle of the political spectrum and get their house in order...Smith and Prentice need not apply (the PC's are probably done, they may try to get back in under the WR banner).
edit on 6-5-2015 by peck420 because: (no reason given)

Yes we had 2 terms of NDP which was more right wing than fasicsts and kept people on welfare at lower rates than the socreds of the 80's and I did some letter writing, because I like the federal and old school NDP, thank you, and am far moe socialist than they are, not Obummer's fascism. I would no banks or money and some massive upgrades to earth both freedom and equality, mom and dad's energies, in fact its crimes against humanity and massively illegal and slavery to not make those changes and so will not vote at all.

They wrote back that I had very unusual opinions and wanted me to participate in a survey, so thought that wasn't a good sign, too awake for them, and backed away slowly.

But federal is a lot better than the western provincial of modern times. Layton was a hero until whatever backed Harper had him killed of fast acting prostrate cancer on Harper's second try for a majority government, when the NDP got quite a few seats. I believe he was murdered. And Harper, 3 terms already? He should be out, actually in jail.

originally posted by: SlapMonkey
a reply to: intrepid

yeah me too!....do they balance out to be centrist's?...maybe it's something like "jumbo shrimp"

In Canada, "progressive" and "conservative" are mutually inclusive.

Ha...I never presume to wonder why people from other countries scratch their heads at the U.S. political system

originally posted by: damwel
Exactly how is this "socialism"? Did you just use socialism because you think it's a bad word?


NDP are part of Socialist International, but they don't even rate as 'Commie Lite'. I'm interested in seeing how this plays out in advance of the federal election. They are still getting a bad rap for their tenure in Ontario, but things were stacked against them...they were handed power in a recession, and I'm pretty sure that other parties breathed a sign of relief. Yes, they tried to spend their way out of it, but today, that's called 'Stimulus' funding. 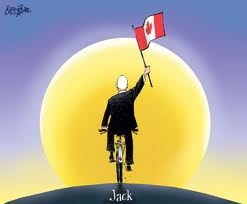 We will own this to you regret, Mr. McKay.

The term Progressive came from a period of upheaval in Canadian politics for conservative parties early in the last century. It was a farmers movement out west mostly and has nothing to do with the bastardized term/insult Americans throw around. The movement had people from all political stripes involved and was meant to provide farmers and more rural Canadians with a voice they felt they didn't have.

But you must admit that "Progressive Conservative" is a bit of an oxymoron, as progress generally means moving forward, while conservation generally means keeping things the same.

In today's world yea, it is.

In fact, the more youthful members of the PC party in the province I live in just lost a vote to have the progressive part of the name dropped due to it's modern day usage in political circles.

posted on May, 7 2015 @ 11:40 AM
link
In B.C. we expected a NDP govt, all the polls said it was in the bag..then poof another liberal/con govt. In Alberta it was time for a change..people are wondering now that oil has dropped and lot's more unemployed..where is all the oil $$?