posted on May, 2 2015 @ 10:35 AM
link
Yes, blacks are 10x more likely to be locked up than their white counterparts.
Yes, racism is still an issue in the US, but when we inject race into the police brutality issue, we only muddy the waters and make it harder to achieve real change.

1. Police brutality/militarization
Cops dishing out street justice. Even when the suspect is surrendered on their stomach.
abovetopsecret.com...
abovetopsecret.com...
When police training consists solely of how use weapon systems, and how to justify it, are we surprised over 1000 people per year are killed by officers. Where is the training to DE-escalate a situation?
Why Are I ncidents of police brutality and police killings so prevalent in the US compared to the UK, Germany, Australia?
I say training, but Cop apologists say things like thug mentality and gang violence. But gang activity and violence has been steadily declining since 1990. And.. Killedbypolice.net will show that less than 1% of police killings are gang shootouts. Of course most are routine stops and drug war b.s.

2. The business of policing
The DOJ report on Ferguson exposed a problem that exists in every city and suburb. We balance budgets on the backs of the young, poor and vulnerable.
Quotas
And when a cop abuses his/her power it is in the interest of the city to sweep it under the rug to avoid huge cash payouts, that further burden already cash strapped municipalities.

3. Falsifying police reports
Your word against theirs.. And prosecutors usually accept the word of officers uncritically, and like I've said previously, it is in the cities financial interest to do so. Whether it be to charge you with a crime or exonerate an officer. There must be more bad cops than good IMO for the practice of falsifying reports to be so common. While mostly exposed after an officer assaults a suspect, a quick google search will show multiple cases ranging from planting evidence to ( my favorite) the description of a suspect from a later to be shown BLIND witness.

posted on May, 2 2015 @ 10:44 AM
link
This is continuing the mindset which will inevitably lead to innocent LEO's being killed out of unjustified fear from the public. The vast majority of LEO's see the profession as a 'helping profession". Many of them have advanced educations now, and being taught that is a part of the curriculum.

There are bad dentists, bad cashiers, and bad dogs. There are bad human beings. When you selectively write only about the bad ones, it's called propaganda. The entire nation is being worked up into a frenzy about cops right now, and it's not going anywhere good, I can tell you that.

Of course the bad cops need to be found out and removed, like in any other profession; but we must be careful not to throw the baby out with the bath water, or promote even more endangerment of the cops whose primary objective is to keep us safe.
edit on 5/2/2015 by ladyinwaiting because: (no reason given)

Neighbors had faith in Freddie, many were looters.

Status quo had faith in Freddie, many were politicians.

Im not promoting a mindset of endangering cops.
In fact this thread is the opposite,,,

A look at the structural problems of policing America
1. Police brutality/ militarization
2. The business of policing
3. The abundance of falsified police reports


Getting away from arguments on one side that say: Racist Coward Cops
And the other that says: Thugs get what they deserve
And don't realize these issues happen in every city and suburb

Neighbors had faith in Freddie, many were looters.

Status quo had faith in Freddie, many were politicians.

Obviously you are of the "thugs get what they deserve" crowd. Move along!
You make my point clear as day.. When race becomes involved, the real issues are lost on a certain part of our population

okay I want to relate something I heard Pastor Jamal Bryant say. One of the reasons why people say black lives matter is because of the example of Denver Colorado shooter James Holmes who is a violent person who was "apprehended" as opposed to the "shooting" of Walter scott. (mulitiple times mind you)


I would love to offer a viable solution HighFive, but the only answer I have right now is to do what we are doing, which is to get rid of them as they surface -- which eventually they do,( as in Ferguson they were found to exist even among the high level administrative, supervisory officers, but it indeed, it took far too long.)

I know they must undergo psychological testing, and extensive interviews with hiring practices and interviews with references. Perhaps adding more direct questioning in those areas would help, such as very direct questions regarding race. Sometimes a racist can be identified with a simple gesture or facial expression. Try to root 'em out! Or as Barney Fife once said "nip it"!

Good one, but to be honest we have innocent civilians being killed out of unjustified fear OF the public by Police all the time now.

They are in "Fear for their lives" 24/7 it seems. No Knock Raids, Property Forfeiture scams, constant unlawful search.

All of my male kids (Son, Son in Law, and their male cousins) have had their vehicles searched. It is common now that if you pull over a young male to search their car. It is getting pretty disgusting to be honest.

Too many of them think they are "Soldiers" and the public is the enemy.

And racism is the tool that they use to accomplish it. So, yes we do have to talk about racism.

I totally agree with that sentiment.

I'm not trying to debunk the racial issues we have in policing, but rather drawing attention to the issues that create an environment where people of all colors are denied their rights.

If you look at the beating of the man who surrendered after stealing a horse, cops of all colors ran in to get their kicks in on a white guy. It's a structural problem more than a race issue.

posted on May, 2 2015 @ 11:24 AM
link
About half of the officers charged were black - including the cop charged with murder.

So I agree with you, it isn't primarily about race and to make it about race distracts from the real issue.

It's about abuse of power.

Good one, but to be honest we have innocent civilians being killed out of unjustified fear OF the public by Police all the time now.

They are in "Fear for their lives" 24/7 it seems. No Knock Raids, Property Forfeiture scams, constant unlawful search.

There is no way in hell I would try to argue that those things haven't happened. No doubt they have, and in some areas/instances it will continue.

Can we just not say "24/7", and all over the place , and make it appear as it's standard operating procedure, because I don't think it is for the most part.

And I can agree with that that there are structural problems

And in the future when it's poor people that are the main targets of the harass, incite, arrest, fine, jail, prison labor... law enforcement policies... poor people will still become cops and turn around and inflict on their own demographic.

posted on May, 2 2015 @ 11:38 AM
link
#BlackLivesMatterOnlyWhenAWhiteIsInvolvedWithTheirDeath

My issue is with self-serving criminals, for whom I have zero respect. Raised by a serial criminal as a child, the memories are sure to haunt me forever. More often than not, at least in my life, it was the police who came to the rescue.

Violent felons, hard drug dealers, looters and the lot are nothing more than dangerous predators, who don't need to be handled with kid gloves. They take, they hurt, they destroy innocent lives, contributing nothing to the betterment of mankind.

There are TWO problems. One is what you have outlined in your post. Police militarization and corruption. But to discount the racial issue is just as bad as making it ALL about race. It doesn't have to be one or the other. Yes, we need to get a reign on the cops, but we also need to address the way cops see young black men as disposable.

These Statistic s on Police Violence show BOTH issues well. Don't discount EITHER problem because they both exist.

According to the most recent FBI reports, from 2005 to 2012, a white police officer killed a Black person nearly twice a week. That’s about the same number of Black people lynched on a weekly basis during the late 19th and early 20th centuries.

Young Black males between the ages of 15 and 19 were killed by police officers at a rate of 21 times greater than their white counterparts.

Of the country’s 17,000 police departments, only 750 agencies report fatalities to the Federal Bureau of Investigation’s Uniform Crime Reporting Program — a measly 4 percent. 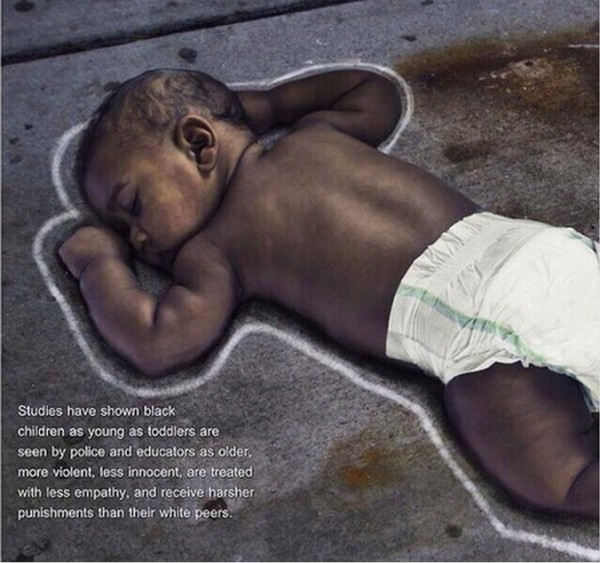 Black officers account for a little more than 10 percent of all fatal police shootings. Of those they kill, though, 78 percent were Black.

According to a report, 71 percent had no weapon at all at the time they were killed or police claimed the suspect had a gun but it couldn’t be proven.

Police officers, security guards or self-appointed vigilantes extrajudicially killed at least 313 African-Americans in 2012, according to a recent study. This means a Black person was killed by a security officer every 28 hours.

originally posted by: Daughter2
About half of the officers charged were black - including the cop charged with murder.

It's not about the race of the officer, though. He's a cop. With the cop mindset. The problem is cops using violence against black civilians.