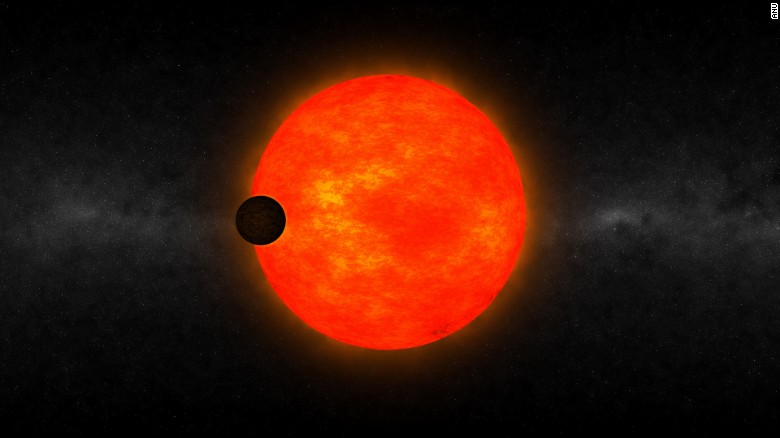 A huge "puffed up" planet "too big for its star" some 500 light years from Earth has been discovered by Australian researchers -- with the help of a backyard astronomer.

The planet's size in relation to the star it orbits challenges theories about how planets are formed, researchers from the Australian National University said.

"We have found a small star with a giant planet the size of Jupiter orbiting very closely," said George Zhou from the Research School of Astrophysics and Astronomy.

"It must have formed further out and migrated in, but our theories can't explain how this happened."

Astronomers believe that planets are created from a "disc" of dust and gas around stars, Zhou told CNN.

"We think that planets are the leftovers of star formations," he said.

But he said the star -- HATS-6 --was almost too small for it to have any leftovers and the discovery of a planet -- named HATS-6b -- raised questions about how large a disk could form around a star relative to its size.

"HATS-6 is one of the lowest mass stars known to host a close-in gas giant planet," the team of researchers said in a study published in "The Astronomical Journal."

The planet has a similar mass to Saturn, but its radius is similar to Jupiter, so it's quite a puffed up planet.

Astronomers first got an indication of the planet's existence when they noticed that light from HATS-6 dimmed, -- suggesting that a planet was passing between the star and Earth.

Why are people spending Billions of dollars exploring and searching the space, but we know very VERY little about the planet we live on? Why are there not paying more to discover more of our own planet? Just a question.

posted on May, 2 2015 @ 09:20 AM
link
a reply to: IndependentOpinion
What research on Earth is urgently needing funding that you know of? I mean apart from all of it, but its not like we can just take physicists and turn them into biologists or vice versa. What should astronomers be doing instead?

Well ... I just happen to have a theory about that.

You see, if you figure out a way to tax the citizens ... and you don't let them have any say-so about how those tax dollars are spent ... you can give it all away to your cronies. A real smart cookie sitting on that big pile of dough might think, "Now who can I give this money to ... in a way that won't make me look bad?"

"I know!! I'll give it to people with advanced degrees most other folks don't have!! That way, they can make s#t up ... and nobody can prove them wrong. Then ... later ... I can make sure it's only my friends who ever get the qualifications for those jobs and they can funnel some of that money right back into my pockets."

And lo, it is so. The rest is in my tag-line below.

ETA: I wonder why there's no caption associated with that picture identifying it as an artist's concept (they've gotta make money too ya know). -nyuck nyuck
edit on 252015 by Snarl because: ETA


Because space exploration has led to numerous advancements in science. It has also created inventions that we use in our everyday lives.

Why are there not paying more to discover more of our own planet?


We spend more on researching our planet than we do on space exploration NASA just gets a better bang for their buck.

"ANU" Appears in the upper right corner of the pic. You need to zoom it out a bit to see it. Guess that's what is done these days?

We actually know quite a lot about this planet. All the "low hanging fruit" to discover has been discovered. The real questions we still have about this planet can't simply be answered just by studying it further.

Why are there not paying more to discover more of our own planet? Just a question.

We discover a lot about our planet and our solar system as a whole by studying other planets. It's called comparative planetology.

Imagine for a moment you were the only person on Earth and all you had is a mirror. You have never seen another human being except in pictures of a few far far distance in a few old book.

How much about yourself and other humans could you learn from simply looking at yourself in the mirror and that old book?

Quite a lot at first but you'd be limited. You would not necessarily know the full range and diversity of the human species.

You'd have one example. Yourself, in a mirror. Are you typical? Are you unique, you wouldn't know. Are you taller than average, shorter? Fatter? Thinner? you'd have no idea. What other types of humans might there be? You wouldn't know.

Right now we have one example of a planetary Biome. Our Earth.

That's why we're looking for others. We also need to learn a lot more about how our Earth formed to understand its present state and future. That's also why we study other planets and other solar systems.

Astrobiology is as much about studying life on this planet as what might be out there.

We could always turn inward naval gazing but we won't learn much more about our planet by doing so.

Our planet is part of a galaxy of planets, the only way to put it in context is by "seeking out new worlds, new life, and civilizations"... to borrow a famous quote.
edit on 3-5-2015 by JadeStar because: (no reason given)

To answer your question we are spending money on the exploration of space in an attempt to understand our universe. Study's such as these my yield results pretending to early planetary formation and may also shed some light regarding our own planets formation.
edit on 4-5-2015 by andy06shake because: (no reason given)

To answer your question we are spending money on the exploration of space in an attempt to understand our universe. Study's such as these my yield results pretending to early planetary formation and may also shed some light regarding our own planets formation.

I understand what you are saying, but, I think they are saying, right now, they are more concerned with people starving and homeless, to care if a planet a couple million lightyears away shows any resemblance to the planet we live on.

I think they are questioning the priorities.

I have a better answer, I think. I know we have a lot of problems down here on planet Earth, but if we survive them all — and it isn't like people aren't trying to deal with the problems — then we're going to get out there in large numbers some day. And the more we already know, the safer it will be to do that.

I want to see our inheritors inherit the stars. Even if they have to do it STL, as I fear they will.

More lightly should we keep on down the path we are headed our children or at least our children's, children will inherit a dark age.
edit on 4-5-2015 by andy06shake because: (no reason given)

Extinction is the likelier prospect. Nature is not known for offering second chances. However, it does us neither any good nor any credit to think and act as if the outcome is inevitable.

You will die one day. Is that any reason to give up on life?