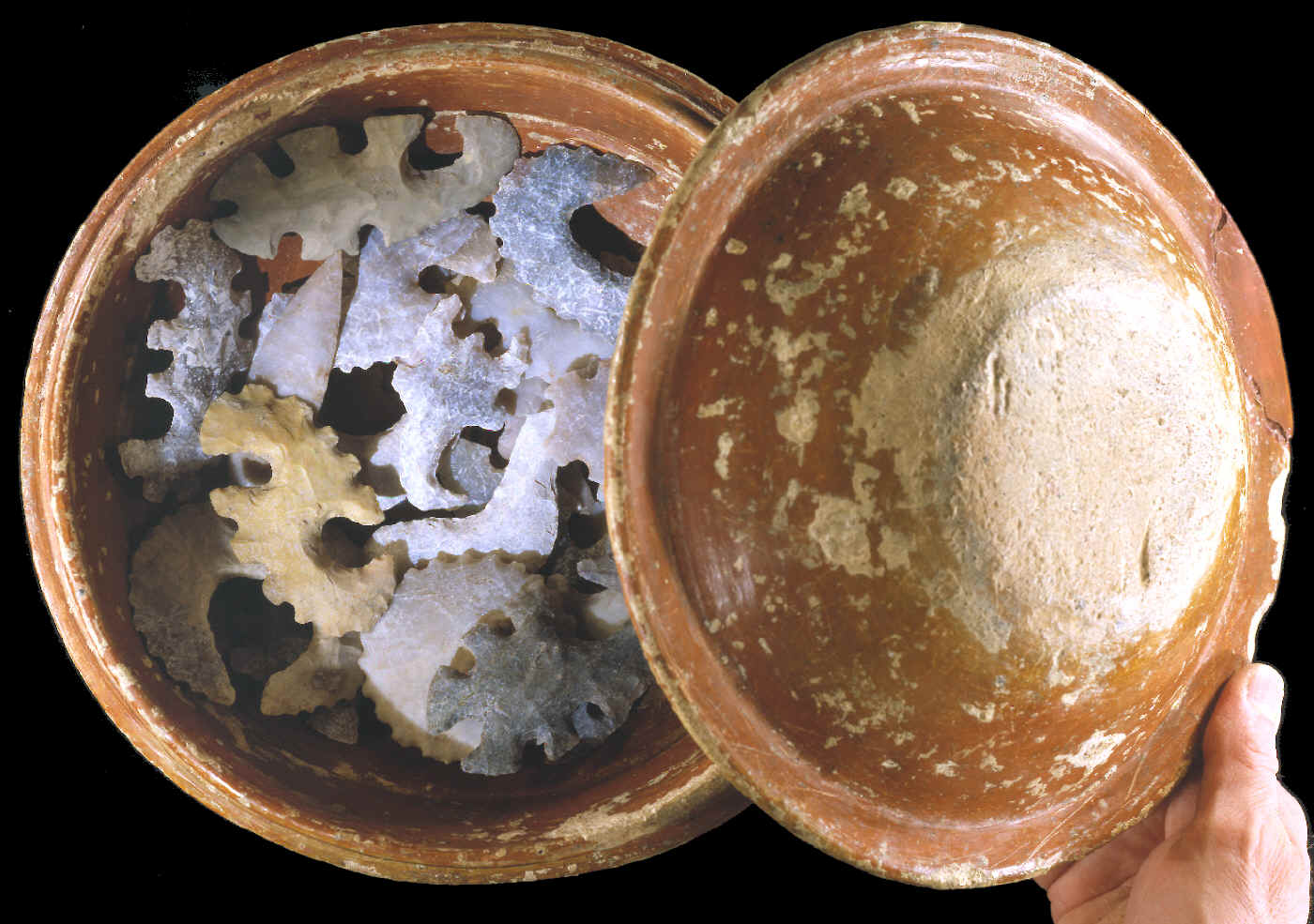 
These may be scorpions: 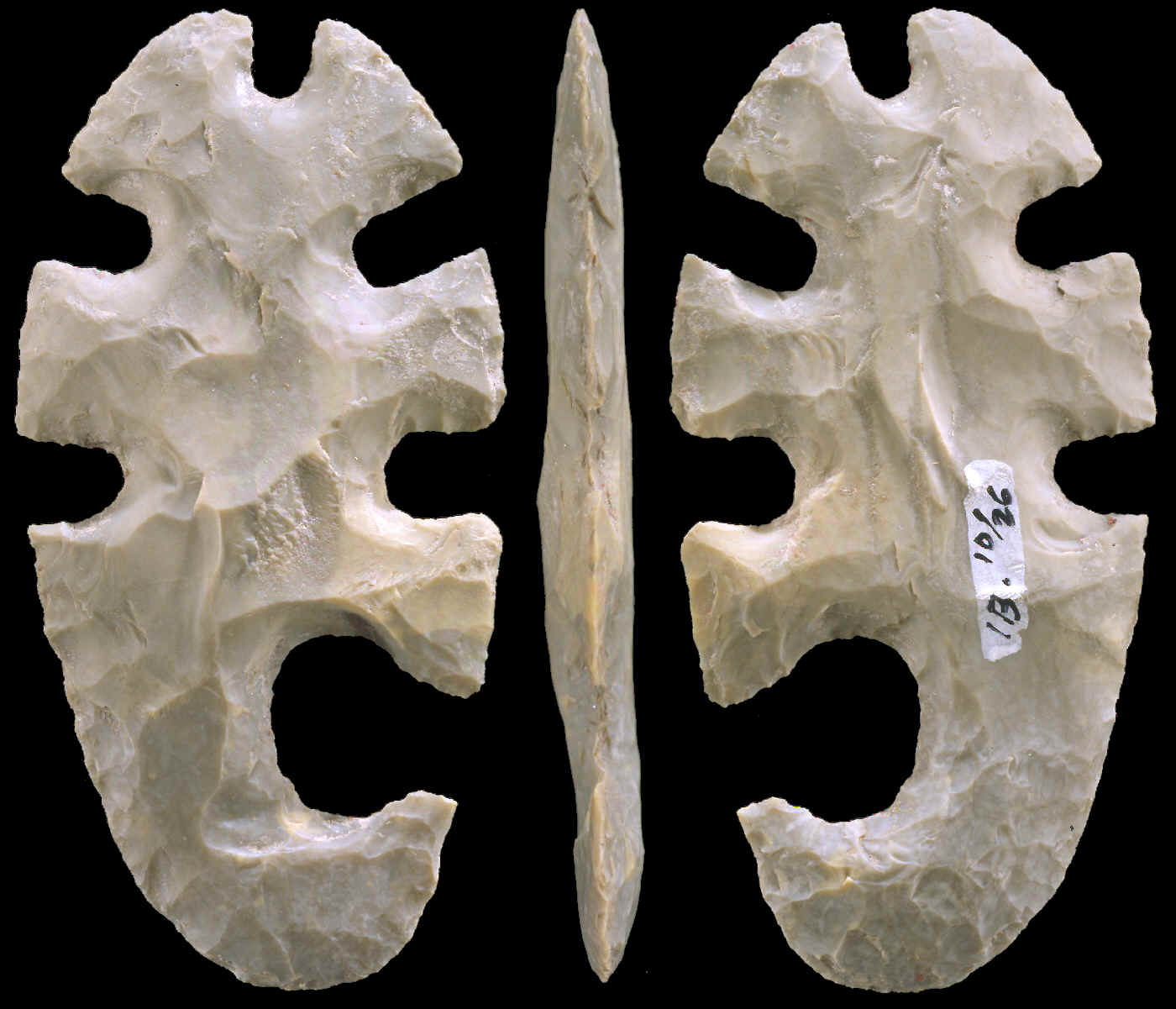 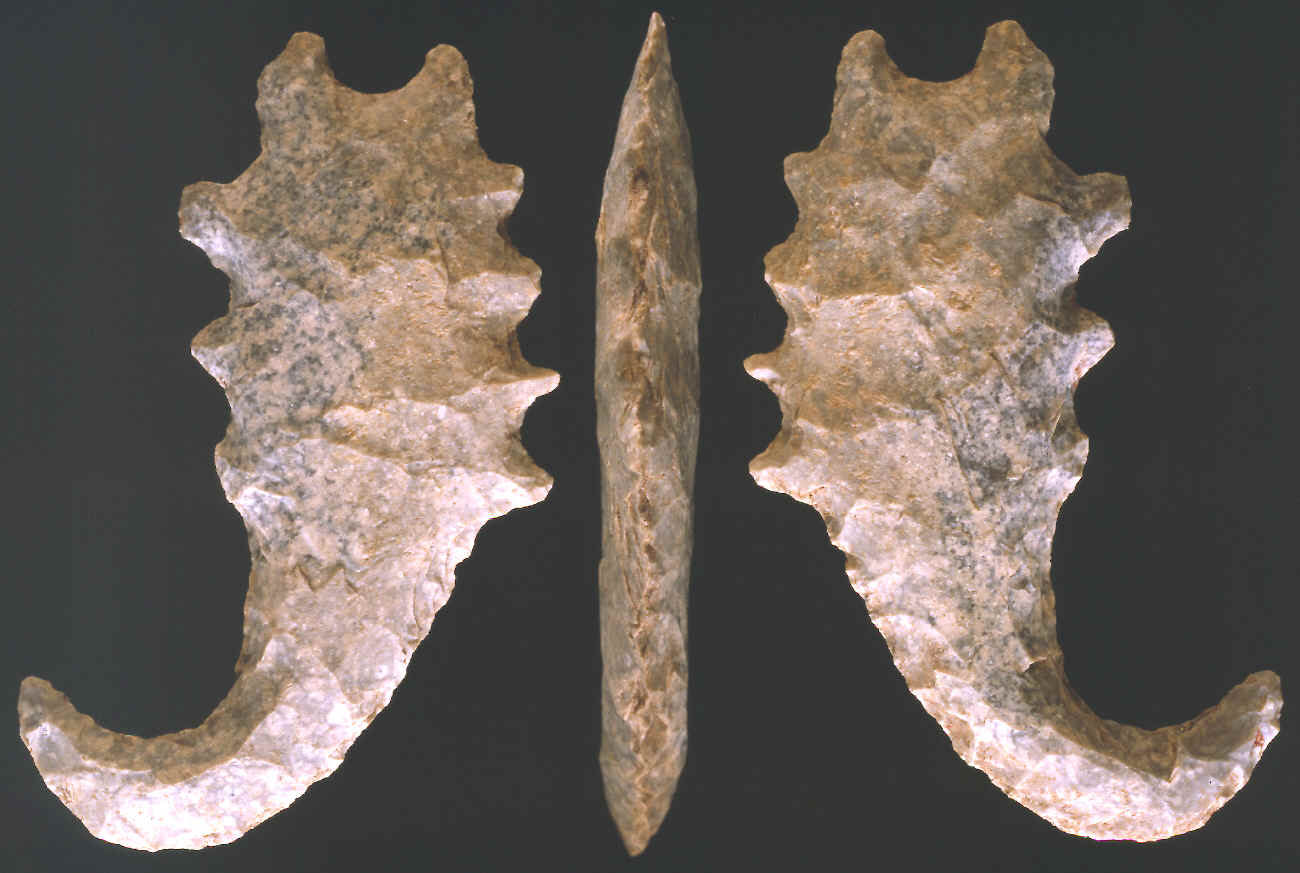 And some other naturalistic shapes that may be animals: 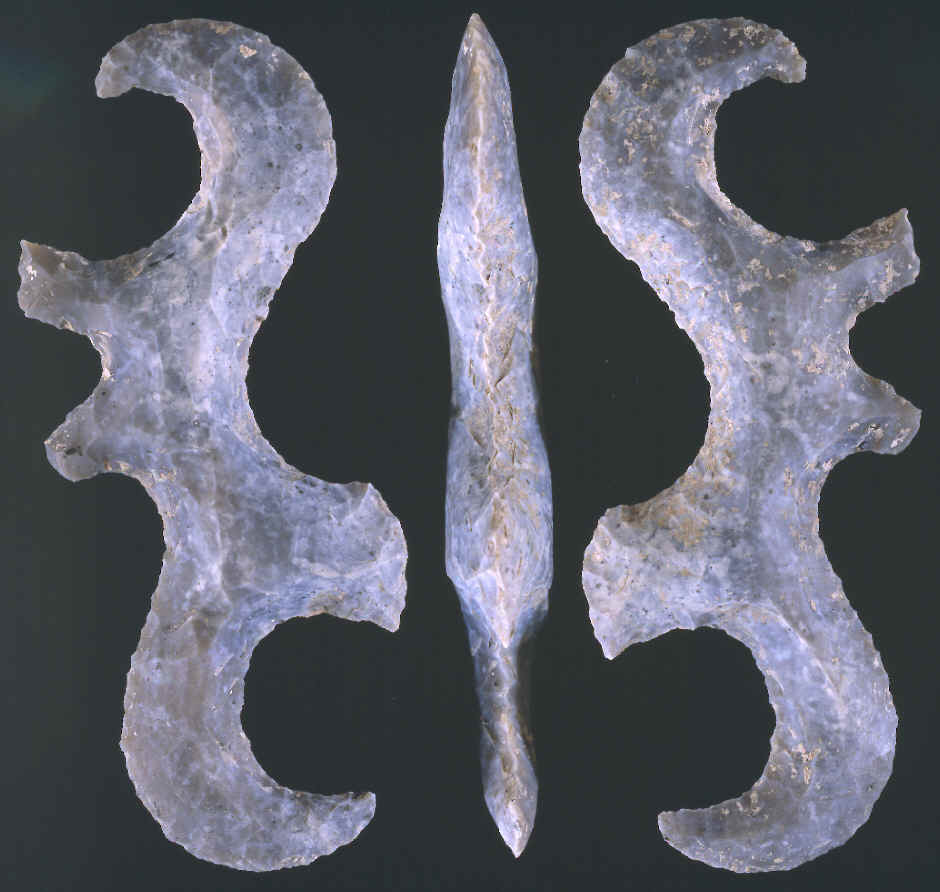 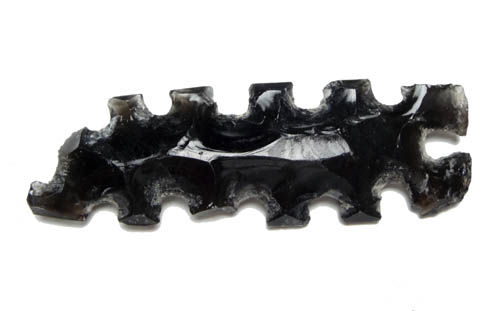 And now they are going to really start showing off.. by punching and drilling holes in Chert, Obsidian and Chalcedony and finely knapping them into various shapes: 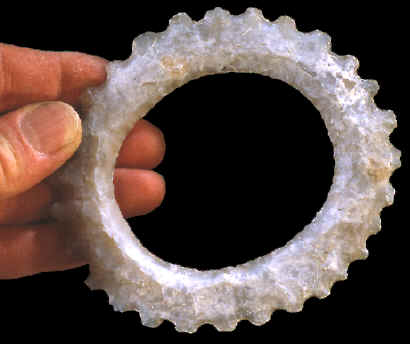 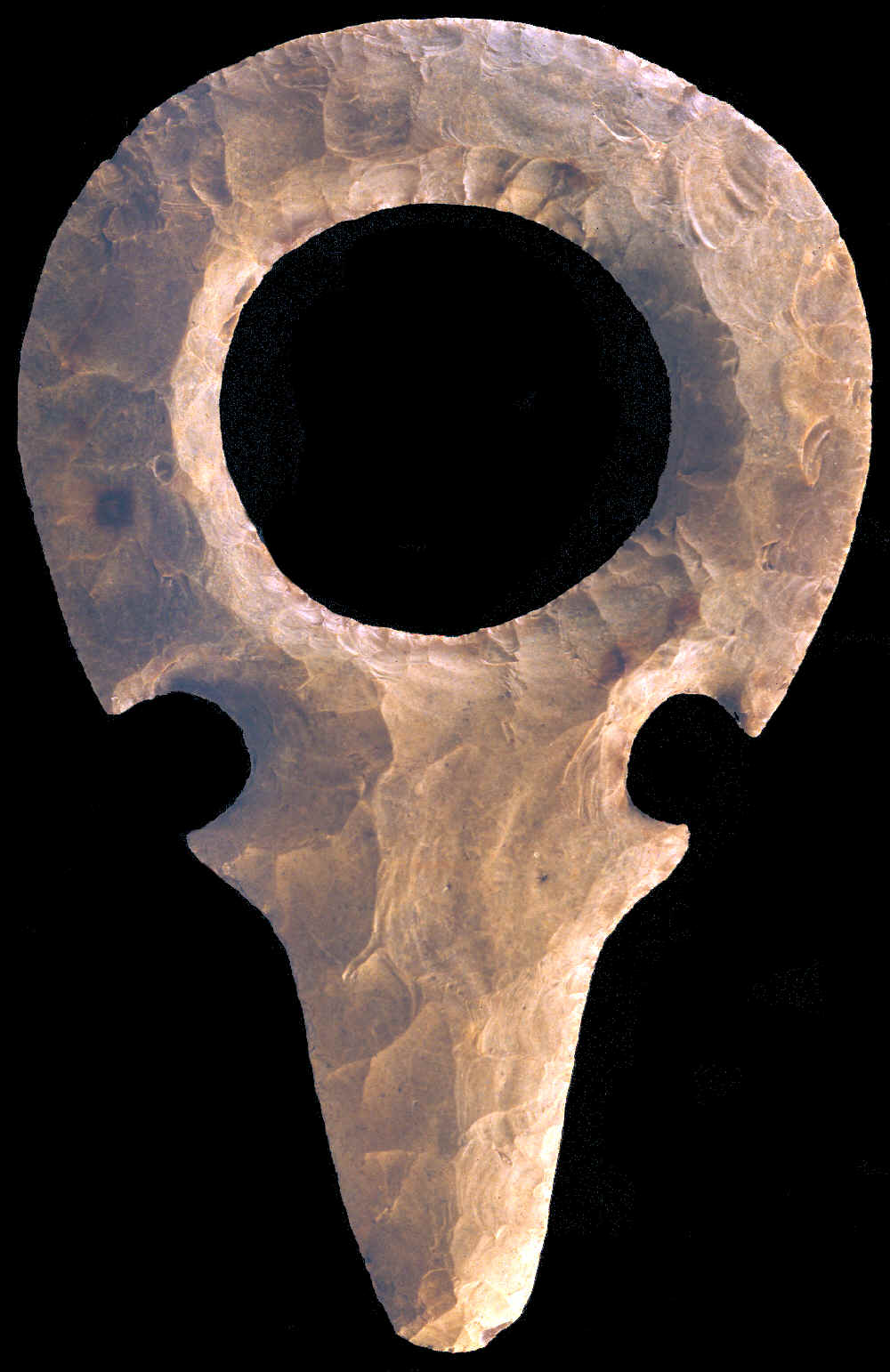 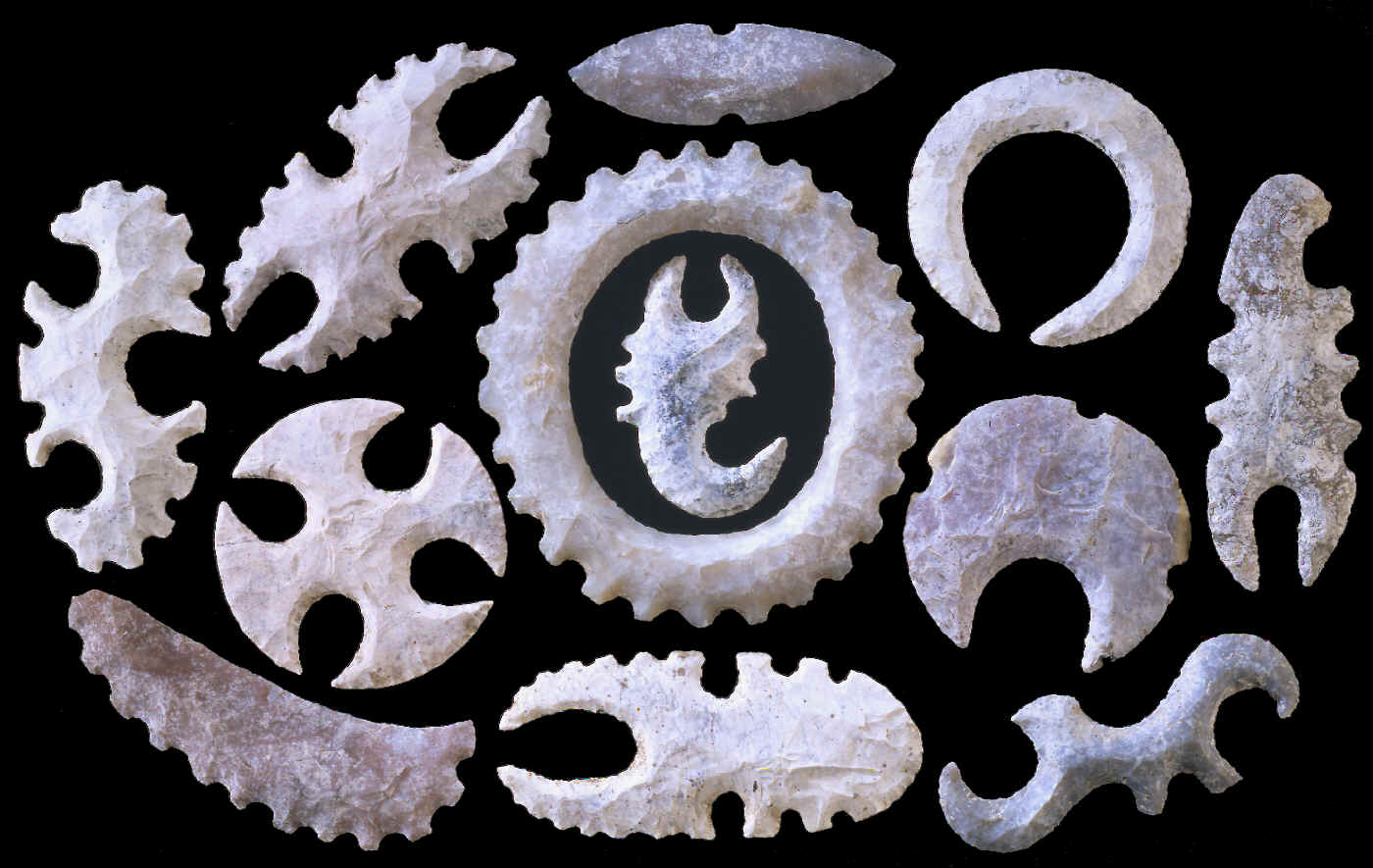 Now that is just to whet your appetite

So the term "Eccentric" is used to describe Classic Mayan artistic knapping of stone shapes, forms, blades and so on, typically found in tombs or as offerings under buildings. They are high art indeed and are regarded as being status items and likely of ceremonial use - these require considerable skill to produce.

And i've only shown you the lesser examples so far.

Here be some more.. 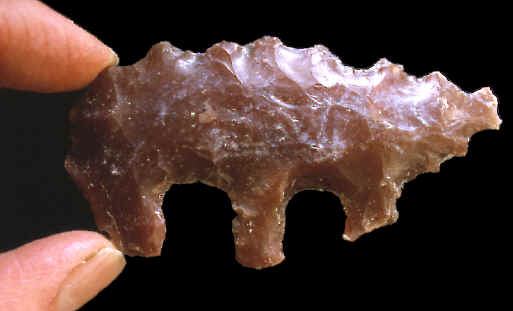 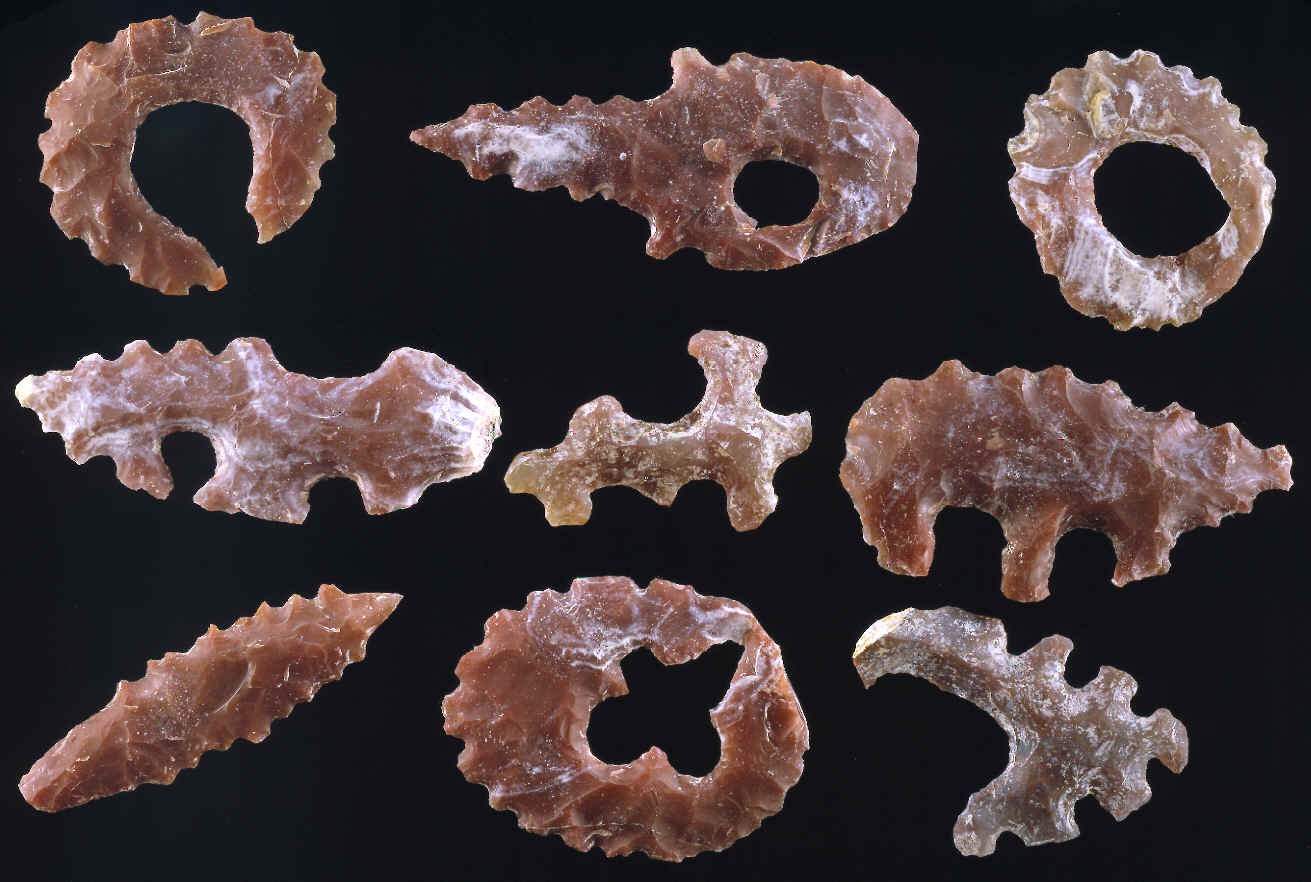 I'm just teasing you.. have a few blades: 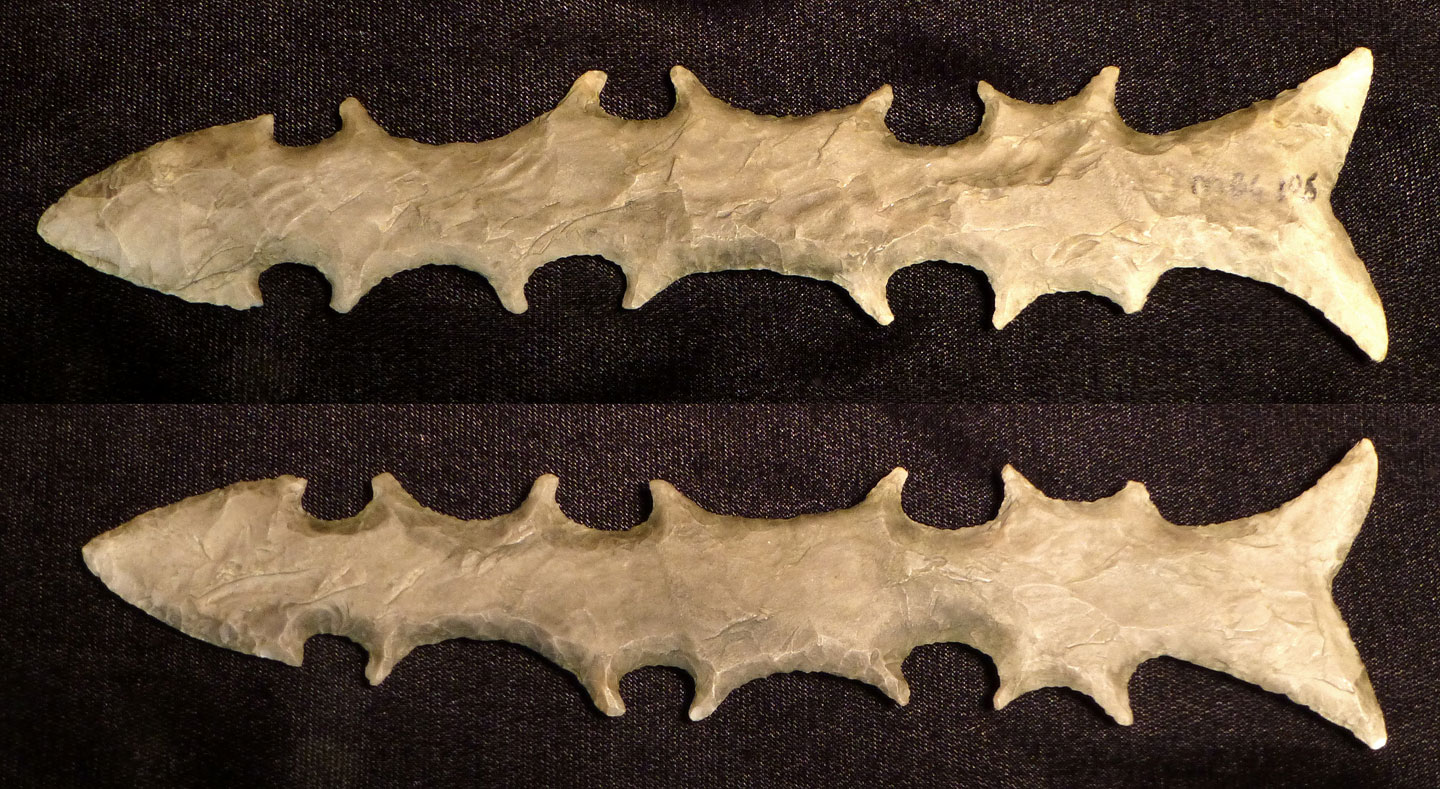 Ready for the good stuff now? I'm not going to describe them as it may ruin the fun. 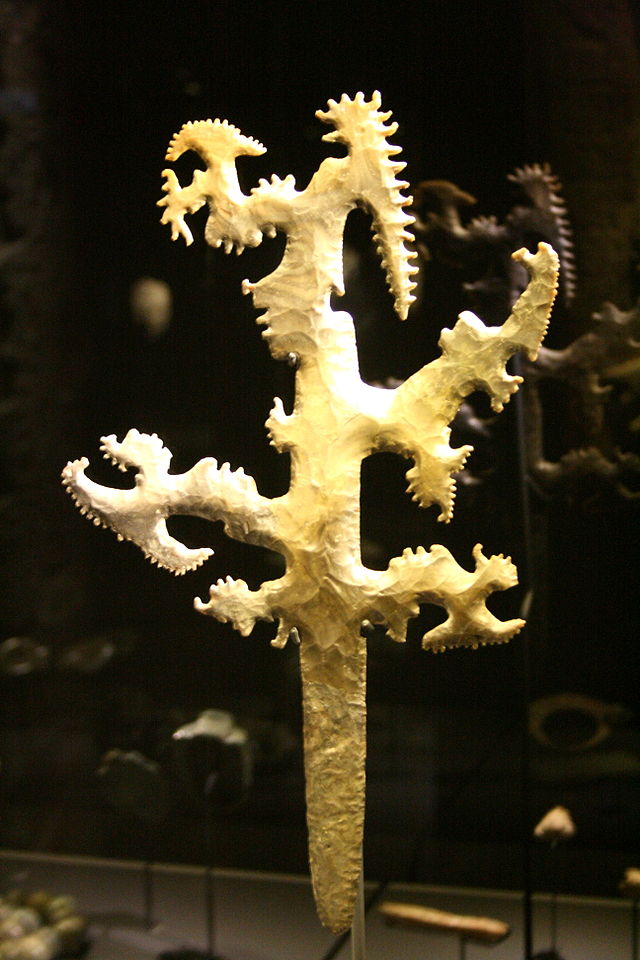 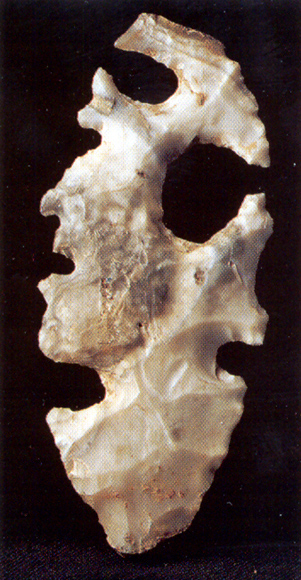 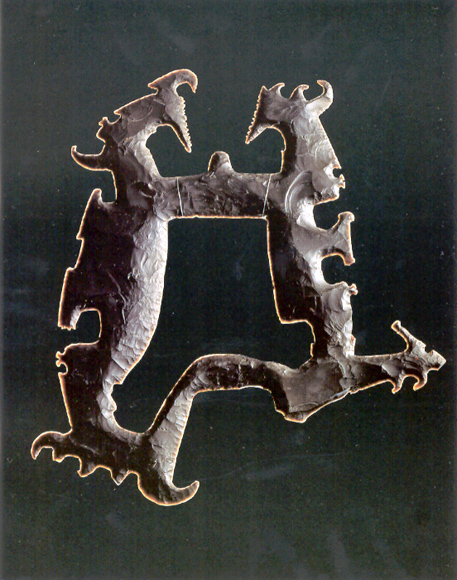 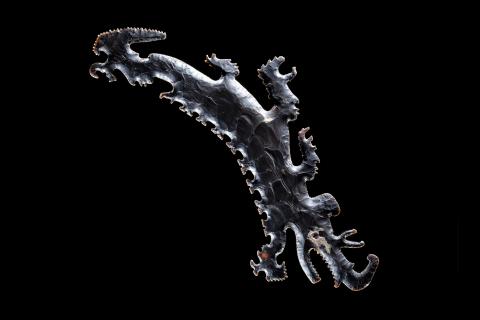 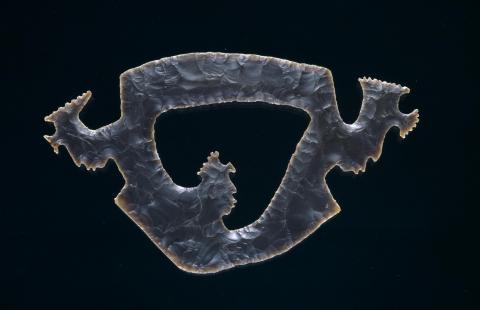 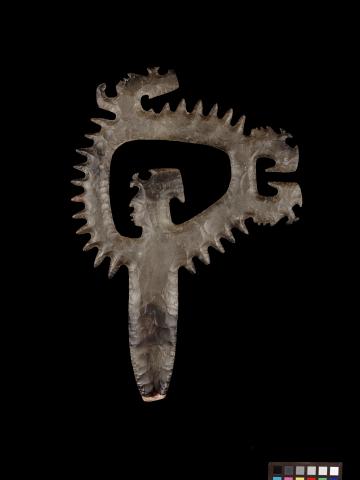 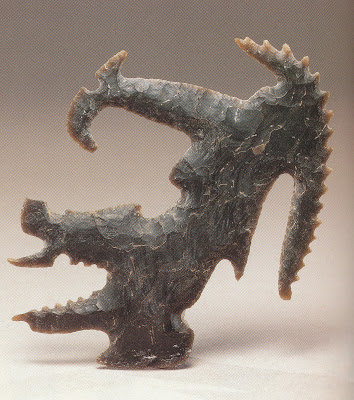 All "just" made from lumps of rock using a stone or copper hammer and either a sliver of bone or a copper point to flake off the detail. Maybe with the use of a stone or bone punch for the detail too...

Dumbarton Oaks Library and Collection (at least 2 here)
edit on 30-4-2015 by skalla because: clarity

By the looks of them to be used in ritual blood letting and laceration....

You'd think so by the looks of them, but i don't know (so far) of any blood traces being found on them.

I know of them from a crafting point of view rather than in archaeological detail, but they do seem to be votive and status related from what i can tell.

The craftsmanship is astounding.

Skalla, on a side note check out the Etley kives from the late archaic/early woodland 3000-2000bc, from the upper Mississippi, at lithic casting labs.
www.lithiccastinglab.com...
Dont they look like bronze European dirks.
edit on 30-4-2015 by punkinworks10 because: (no reason given)

I hope no one takes this the wrong way, but holding a bachelor of fine arts degree and having taken sculpture on three separate occassions, these could just be the workings of a sculpture or art school, learning how to create details and different shapes and edges.

I'm not taking away from the beauty or the skill, but I carved some pretty cool stuff out of alabaster with just some chisels and and a hammer, and a few smaller instruments for scratching in details. Pretty much what they had, but a different stone. It's not that difficult, to be honest, to make abstract shapes and items.

So, they're beautiful to look at, but I don't think they took masters to create (at least not the bulk of what you have listed here).

Call me a fuddy duddy if you must, but that's what I see.

posted on Apr, 30 2015 @ 02:34 PM
link
Absolutely top levels of skill to form these, and last this long without crumbling or breaking. The Mayans were amazing, I wonder why they did not take these with them??? Thanks for the thread....cool indeed...

I take your point, but these are knapped and not carved, as shown by the flaking.

Modern knappers do make them, but the best examples take years of experience.

There are some famous "fakes"/repro's such as the Tussinger Eccentrics: 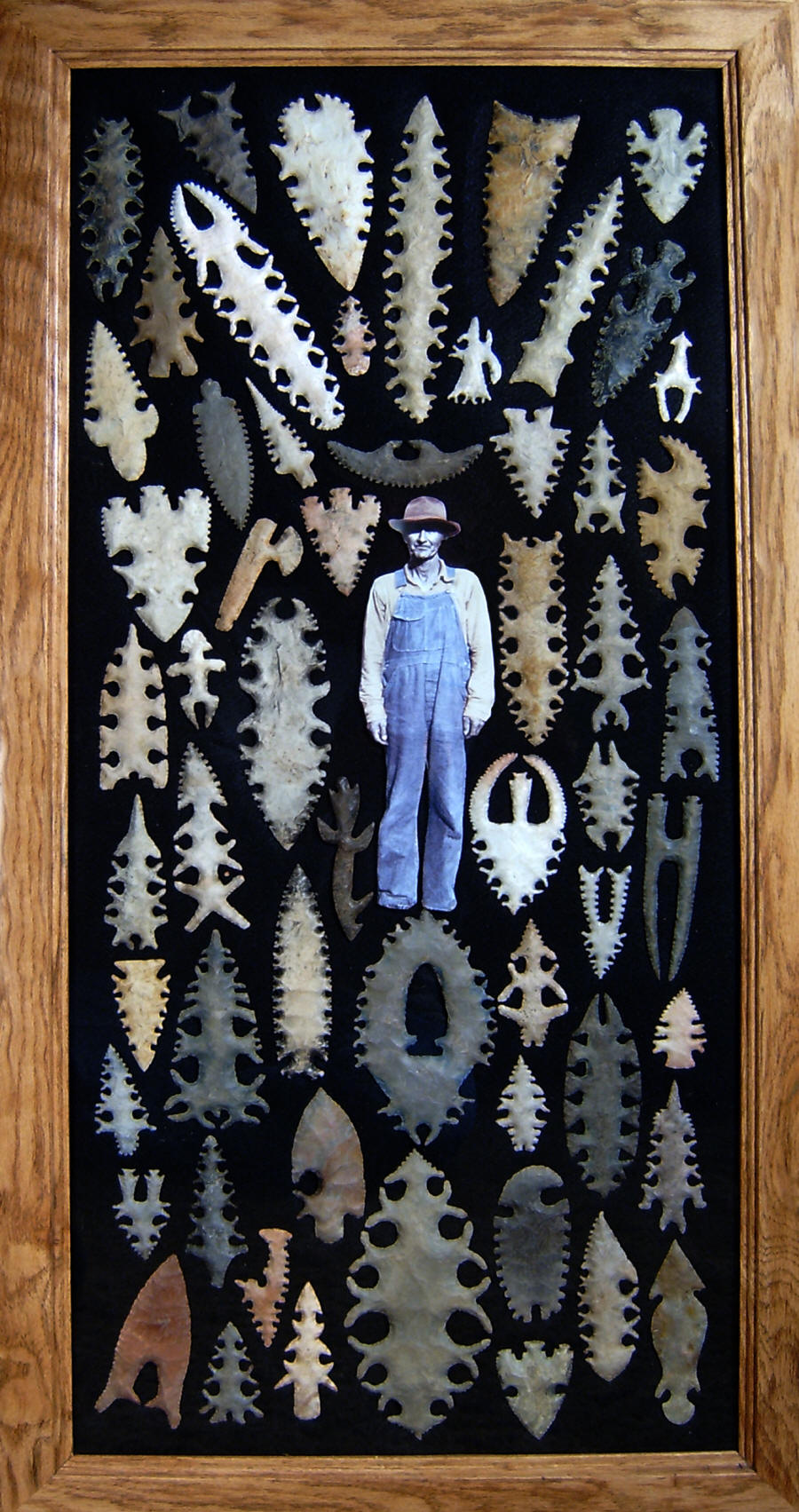 And here is one made by Jim Wynne, a top knapper:

It's not "every day" kinda work

ETA: Alabaster is quite different to work than a conchoidally fracturing stone too..
edit on 30-4-2015 by skalla because: (no reason given)

Thanks for adding the link! i was looking for them but it's a pretty big site.

They are reminiscent of Eden points too, particularly the second pic

posted on Apr, 30 2015 @ 02:55 PM
link
a reply to: SlapMonkey
As Skalla said,
Carving alabaster and knapping obsidian are completley differrent things, its like comparing apples and frozen burritos.

Thanks for adding the link! i was looking for them but it's a pretty big site.

They are reminiscent of Eden points too, particularly the second pic


It is a big site, it took me a couple of months to track them down after i first saw them.
For some reason ATS uploader wont takeany images saved from the site.

Many of my pics were uploaded from LCL.... most of the simpler examples are from there, as well as the Tussinger pic.
edit on 30-4-2015 by skalla because: (no reason given)

posted on Apr, 30 2015 @ 03:02 PM
link
Im absolutely blown away by the craftsmanship involved in these, the time, the skill the patience.

Thank you so much for making this thread! +1

I had no idea napping could be taken to such beautiful extremes.
edit on b1414329 by Biigs because: (no reason given)

Lovely stuff. Have you posted about 'eccentric' forms before? Some are very familiar and so is the term. Maybe I've seen them in a previous post?

I TinEyed the first image as my eyes didn't immediately see that it was objects in a basin. It looked like a wonderful, abstract pattern in the bowl that suggested depth. A different page in one of your links had a little extra detail.

Is it me or are there some examples of pareidolia in the shapes? They remind me of cameos with a Mayan stylistic flavour.

That led to a meandering thought that art movements can be measured in decades and, perhaps, they represent a 'movement' in the art of the times. New technology, a seminal artist and then emulation by patronage or peer groups? The movement notion crossed my mind as I wondered how long it took for ideas to travel in Mayan times?

The bowl could have been one artist's collection or a collector's trove.

For one OP, my little brain is speculated out!

Those are a joy, I particularly like the naturalistic pieces, some have a fractal, almost Rorschach quality to them.. thought forms?

The tiny little teeth/barbs must have been painstaking to achieve. The serrated edges on some Gerzean knives are comparable in skill but these are much less ordered and without that uniformity that comes with a standardised process. Just shows what is lost through specialisation, if we needed reminding. These Eccentrics are the product of multiple individual craftspeople creating as a personal expression. Love them. Thanks for posting.

A different stone completely, yes. Google flint knapping. You'll understand why this is impressive in obsidian, but not in alabaster.

I did mention them and posted a pic here a few months back, and you in fact suggested it would make a good thread

The bowl pic, and a few others were saved from those large images, but maybe they get re-sized in ATS uploads... i was hoping that they would show full sized so that the flaking would be more obvious.

Apparently this bowl has such a tight fit with the lid that it's pretty much a seal:


This ceramic container is remarkable for the

perfect fit of the lid with the bowl. They can be

until they snap together. But unlike plastic that is

flexible it's difficult to remove the lid once it has

been closed, without breaking off the rim.

As for the shapes, many of the simpler forms are assumed to be animals such as scorpions, centipedes etc.

I found what is described as a spider too: 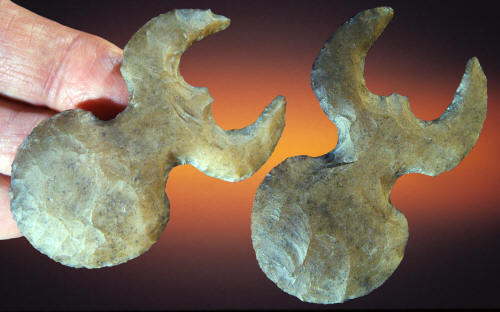 The more fancy ones?

There are a LOT of faces there, and this one is a crocodile canoe with passengers:

And this is described as the heads of K'awil, a god of both fire and lightning

In The Ancient Maya -- by Robert J. Sharer and Loa P. Traxler -- it states that K'awil may have been a lightning god -- personification of lightning. This is due to the smoking axe (or tube) in his forehead, which may be related to Chac, who had an axe.


The ancient Maya used the image of K'awil in their royal accession ceremonies. Scepters made to look like K'awil -- known today as Mannikin Scepters -- were important in rituals concerning ascending the throne. Also, "eccentric flints" (stone chipped into designs, and not for practical reasons) of K'awil have been found. It is thought that these flints used to be part of scepters.

Well said - the flaking on Gerzean knives is beautiful, but i can't beging to imagin the planning and care required not to break these buggers through shock as you work on the deep notching.

I can notch a barb in glass well enough, and in flint most of the time too... modern knappers have competitions in deep and thin notching which makes some pretty crazy results, but yeps, these are high art indeed.

Loved how you presented this skalla, and Tha ks for putting it altogether, really creative and awesome stone work!