How Do The American People Criminalize Campaign Donations & Lobbying?

posted on Apr, 28 2015 @ 10:02 AM
link
Campaign contributions & lobbying, inarguably the two greatest factors in policy & the #1 detriment to humanity.

To me, eradicating these practices is the only true first step the people can take against oppression. What kind of petition needs to be started? How can you change policy on a national level without being killed or shut down within days?

I have no knowledge of the law, be kind.

To me, eradicating these practices is the only true first step the people can take against oppression. What kind of petition needs to be started? How can you change policy on a national level without being killed or shut down within days?

I have no knowledge of the law, be kind.

I think that I read that Arizona has or had political finance laws. It limited the amount each politicians could spend of their own money and the amount that they could receive as donations. The intent was to level the political playing field between the highly financed corporate politicians and the average guy with a shoestring budget.

The first and only time that I read about this was when John McCane was running for office. Any update from those in Arizona would be appreciated.

While there is certainly widespread bribery and in kind corruption of every type throughout all levels of government, outlawing discussions between associations or individuals and their elected government officials is neither desirable nor feasible.

It is the power itself that provides the possibility of corruption and therefore must be kept to a minimum.

There is one group of lobbyists whom I would agree must be banned, state lobbyists. Many people don't realize that taxpayer money is going to pay salaries and grease money for full time official lobbyists for various departments, agencies and even offices.

We do not have government so it can lobby itself for expansion.

Non-governmental lobbyists are everyone else including you and me if we want to talk to our representatives.

The laws are owned by corporations, through and through. There is no such thing as a change that helps the people regain control- not within the legal system.

Reform of politics will have to come from actual votes, from real people, putting other real people in power.

From what I can see, 90% of the people are too dumb to have any control, and the 9% that could help are too busy trying to feed their families.
The remaining 1% are already in on the joke.

Pretty well on the nail there. I do think though that people are getting more aware about the damage lobbyists are doing and especially those for international corporations such as Shell. On RT today we heard that Shell had successfully lobbied the EU to downgrade its renewable energy policies. Now if that doesn't suck, I don't know what does.

Those laws mentioned above about levelling the playing field for election funding seem about right to me. In the UK we have parliamentary front benches made up of millionaire bottoms - useless and out of touch with ordinary people whose taxes they control.

Its also when one reads about men like politicians like Heseltine who knows all the tricks to get money from taxes with which to make more money, now he's been exposed, hopefully that little loop that the public don't hear about so easily will be knotted off, especially for people in positions of government.


Surely you don't think ONLY state lobbying is bad.


The defeatist angle is well covered in every other thread on ATS, I'm trying to discover what kind of movement needs to be initiated nationwide to enact such a change.


Surely you don't think ONLY state lobbying is bad.


The problem is that power wielded is power peddled. Without the power to manipulate the free market or award loot, there would be no (or at least much much less) motivation for special interest influence on government officials.

Once that is achieved, there is little justification for maintaining such a large bureaucratic apparatus. It can then safely dwindle and become more ceremonial.

Since I believe that free associations of citizens are not bad, I do not believe that non-governmental lobbying is bad.

I understand, I just can't understand.
What really is lobbying? 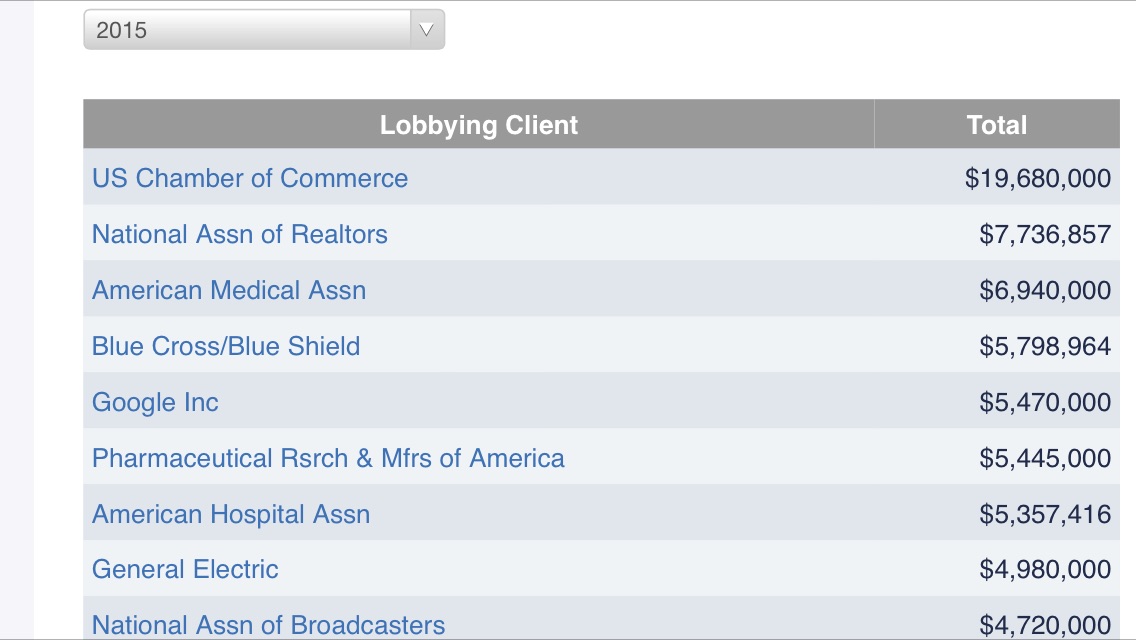 What is all this money going towards? How much money & area of spenditure is being affected by the existence of "lobbying"?

How much are the lobbyists themselves getting paid? & how much money is thrown around under the table I wonder?

The only justified lobbyist I can think of might be Veterans Affairs.

It brings to mind that movie Thank You For Smoking.
edit on 29-4-2015 by FaceMyBook because: (no reason given)

posted on Apr, 29 2015 @ 07:16 PM
link
I bet eradicating lobbying would quickly lead to the collapse of For Profit pharma/healthcare.

I understand, I just can't understand.
What really is lobbying?

What is all this money going towards? How much money & area of spenditure is being affected by the existence of "lobbying"?

How much are the lobbyists themselves getting paid? & how much money is thrown around under the table I wonder?

The only justified lobbyist I can think of might be Veterans Affairs.

It brings to mind that movie Thank You For Smoking.

Those are perfect examples, I can point to the specific special treatment, subsidies and mandates that each have been able to award themselves. In each case, the resulting policies have resulted in reduced diversity of industry (fewer competitors), lower quality and higher costs.

The government provides one stop shopping for all monopolistic aspirations.

"When buying and selling are controlled by legislation, the first things to be bought and sold are legislators."

not gonna pretend that I get it but I have a crack at this thread.. ok I think

u will never win and then there is the however
if it won't be corporations
than it will be ur average joe
i vote for u ..u make rules to favor my industry = my wage.. that is not preventable
what is good is like in AU there is a transparency of public figures and police, law makers they are first presented to public. cop that speeds on news, drink driving politician on news out of parliament, drug taking fottie player in jail cops spying on his phone conversations not even denying it. things like a judge they get paid so well not worth taking a bribe.. if u fail as a polititian u get thrown out or some lady throws a shoe into ur face literally..if a company is doing dodgy # lying to customers and who knows what even a spous #ing over they partners, unfair immigration rules etc etc u name it.. is actually a ok as a show the next day telly so why not.. all accounts audited- noticed America is dobbing Aussie companies for not paying taxes.. this happened twice last week or when I think it was the only electricity provider we have and someone else.. if things like this they keep up they're doing a good job.. I said this earlier here a good example is the olympic games. the cometee receiving gifts money etc people I think still waiting for trial(I think)and the ethics and moral behind the whole olympics is a great example.. coke and jacks and Adidas acting as sponsors is now a no I think.. the whole ticket system was totaly corrupted too.. that u get praised, elected, rewarded for having a good moral record and ethical conduct is becoming a must in some places other places are going down the hole.

my absolute favorite is the uniting religion movements sponsored by who? the world bank.. lol
I think I understand this correctly at ur end a recent joke to me was ur green political party who is the politician what company he ows what who's buddy and advisor he is ..who preaches his words to world who signs sanctions over this persons direct business thread.. please would live to be corrected on this one.. I just hope I totally got this one wrong and none of it is related.. i mean to turn something like environmental protection into something so sinister would be a real wake up call for me.. but I just puzzled something I don't have a real proof to.

next don't know what region u talk specifically but the guy who mentioned arizona or AU or the groups behind auditing olympics or the two(or how many) kids who exposed the whole Nike misconduct with iPhone find out how they did it maybe u come up with some ideas.

legalized corruption is what it is. I think it's way past the point to shut it down. It's all downhill from now on. Anyone trying to stop it will get trampled by the cartwheel.

So long as it is legally recognized that corporations share the same rights as people, the legal apparatus is unreliably misaligned with reason and honesty and cannot be sought for redress.

The 28th Amendment appears to be the most logical and probable step in the direction of stemming the tide of corporate corruption in general.

Denouncing the Bill of Rights from non-living multinational corporations might even put them into a position to actually serve humanity in a positive capacity.
edit on 30-4-2015 by Boomorangatangarang because: (no reason given)

I don't know what this means

but as a smoker
at one delusional stage this crossed my mind
I know for obvious reasons I was obviously split moment delusional but
with the whole smoking is bed for u campain agenda i wondered if in beggining health risks were not actually the point and it simply started as a agenda to punish Cuba for Cuban revolution in 1959.. I mean I think this it is bed for u started from memory in 1960's? Anyway i rather corn syrup then a fag
is so much cheaper too:/

posted on Apr, 30 2015 @ 09:07 AM
link
if u say USA is a corporation why don't they embrace the best law of all and declare corporate bankruptcy.. no strings attached

Federal, State, and local government shall require that any permissible contributions and expenditures be publicly disclosed.

this may or may not be relevant or true for the matter of fact
yet the federal bank doesn't want to submit to public or international audit (from memory they storing gold on behalf of foreign banks for what ever reason)
edit on 30-4-2015 by MimiSia because: (no reason given)

but I assume I understand what u said

originally posted by: MimiSia
if u say USA is a corporation why don't they embrace the best law of all and declare corporate bankruptcy.. no strings attached

That would probably end up helping the average joe, which is proven bad for business (if business = heavily concentrated personal profit)