New X-37B Details leak out from the DOD

posted on Apr, 27 2015 @ 08:43 PM
link
We finally get some details on what missions the X37B has been doing up in space. Its latest mission will test some form of exotic thruster that may have huge implications on future space development. I think its great we are starting to learn what kind of missions the X-37B is capable of doing. 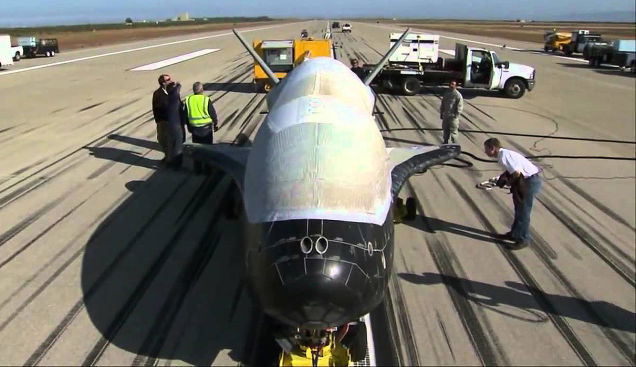 posted on Apr, 27 2015 @ 08:46 PM
link
Sure I believe that I mean why wouldn't I ?? Now I didn't follow this real close but wouldn't a lot of ground based amateurs reported it doing a lot of maneuvering as in testing??

They have. It frequently changes orbit while it's up there, some of them major changes.

The X-37 is unpowered. It launches in the nose cone of an Atlas rocket and glides back like the shuttle did.

Any idea of what I saw then? I've heard that an object launched at 45degrees would be more ideal but idk the physics to prove it so its just speculation.

Possibly part of a missile test, but if it was something, it's part of the black world.

Now tell me again what this thing is good for?
It's not the replacement for the shuttle, right?
(Oh, say, where is the replacement for the shuttle?)
Is it not a weapon's platform? (Hardly big enough for much of anything.)
Is it a science platform? (What manner of science.)
It can stay in orbit or a year? (Goody!)
It can land after being in orbit a year. (Goody number two!)
Is it an attention getter or perhaps better stated, it is a distraction for the citizenry and media to marvel over while triangles are doing all of the real work in space and on the Moon today? (Probably.)

Folks, my position on this matter comes from, first, having witnessed a triangle and, second, having access to a 1989 book that was produced through the Air Force for the US Congress that gives the blueprint for how we were going to staff the newly created US Space Command with our various services and take the command of space out to and including the Moon. BTW: The triangles were operational before that time. That book's title is Military Space Forces: The Next 50 Years, ISBN 0-08-0374332-8. Perhaps the Library of Congress has it on-line but I doubt it.

It's maneuvering has been noticed since its first launch in 2010

It looked like something was attached to the back of it or it had some type of payload. Who knows though..I checked to see if Vandenberg put out a warning of a launch to any ships and couldn't find anything.

Then not a missile if there's no NOTAM. That means it was something else.

From the link that you provided:


It is a Hall thruster electric propulsion test to enable in-space characterization of design modifications that are intended to improve performance to the units onboard Advanced Extremely High Frequency military communications spacecraft, officials said Monday.

Produced by Aerojet Rocktdyne, the AEHF satellites’ Hall thrusters are 4.5-kilowatt units that use electricity and xenon to produce thrust for maneuvering satellites in space. The novel electric propulsion system produces a whisper-like thrust by ionizing and accelerating xenon gas.

Unlike conventional chemical engines that deliver substantial boosts with each brief firing, the electric system needs the stamina to operate for exceptionally long periods of time to harness its 0.06-pound-thrust into orbit-changing power.

I think this is already being done and they are just fine tuning it if I am reading this right. Very cool stuff here .

Sounds a lot like the V1 rocket but that one has not been around since 1945 :p

originally posted by: kevinp2300
a reply to: PandaLord

Sounds like you saw a Minuteman III ICBM test. They do that a couple times a year, iirc. They fly west from Vandenburg and come down near Kwajalein Atoll.

Usually there is a NOTAM released before tests. Although it could have been. That's the first thing that came to mind.

the thrust coming out of the back had way shorter of a length than the ICBM vid you posted and was way larger in diameter. I did not even see contrails behind it. Then again it was at night.

posted on Apr, 28 2015 @ 09:29 AM
link
Wonder if the X-37b along with testing a new thruster system, has the capability of moving satellites into other orbits. Some of the more classified satellite systems must be reaching critical altitudes depending on when they were put into orbit. X-37b could extend a satellites operation by literally towing it into a different altitude and orbit. Just a thought. Im no expert on this subject, just looking at what and why.

posted on Apr, 28 2015 @ 10:29 AM
link
Space Command was featured on "60 Minutes" this past Sunday. Hanging in the atrium is a mock-up X-37B positioned upside down, that is, with its equipment bay facing down. In the bay was a large optical instrument, probably a camera of some type.

This vehicle, while small, is probably very good at what it does. It's not the space shuttle, but it still makes me proud to be an American.

posted on Apr, 28 2015 @ 11:25 AM
link
Does anyone know where I could get a launch schedule for any rocket at Cape Kennedy or Vandenburg. I have always wanted to see a launch of a large rocket before I die (bucket list). I have fired many 2.75 inch rockets and have seen the launch of a Honest John at Camp Grayling, Michigan in the middle 1970s with a water warhead. I was amazed at the noise and speed of it's departure. It flew for just two or three second before it was detonated. I was impressed by something that large moved so fast.