page: 1
126
<<   2  3  4 >>
log in
join
share:
SkepticOverlord
+43 more
posted on Apr, 27 2015 @ 11:23 AM
link
The protests turned riots turned destructive riots in Baltimore, in response to the highly suspicious death of Freddie Gray while in police custody, have taken a serious turn for the worst as rival area gangs have created a "coalition" for the purpose of murdering Baltimore law enforcement officers. According to the Baltimore police department, they have received credible information, from numerous reliable sources, that the Black Guerilla Family, Bloods and Crips gangs have abandoned their own turf wars in favor of a coalition against law enforcement. 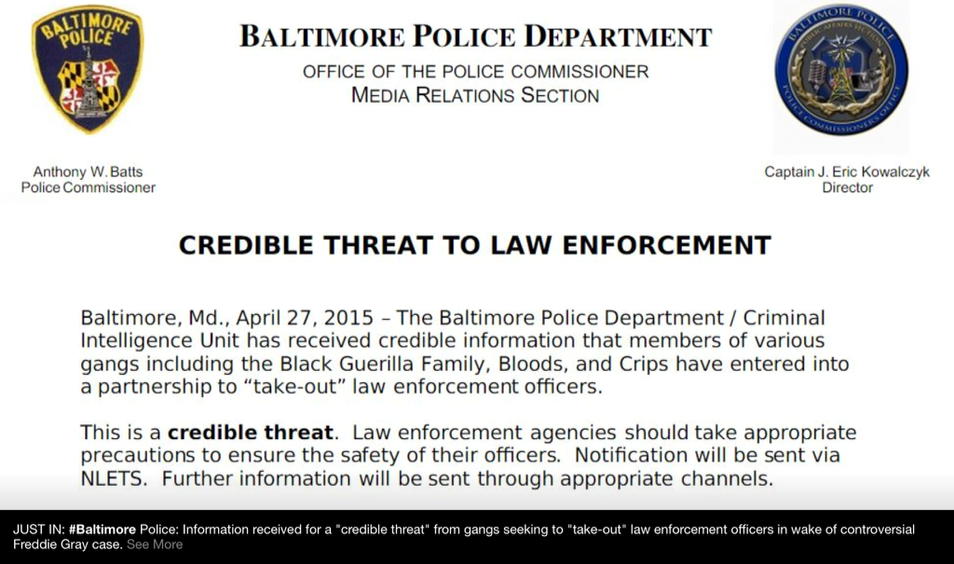 The University of Maryland, Baltimore is closing early today on the advice of Baltimore police.

Max Blumenthal, Senior Writer for Alernet.org is calling BS on the "credible threat." 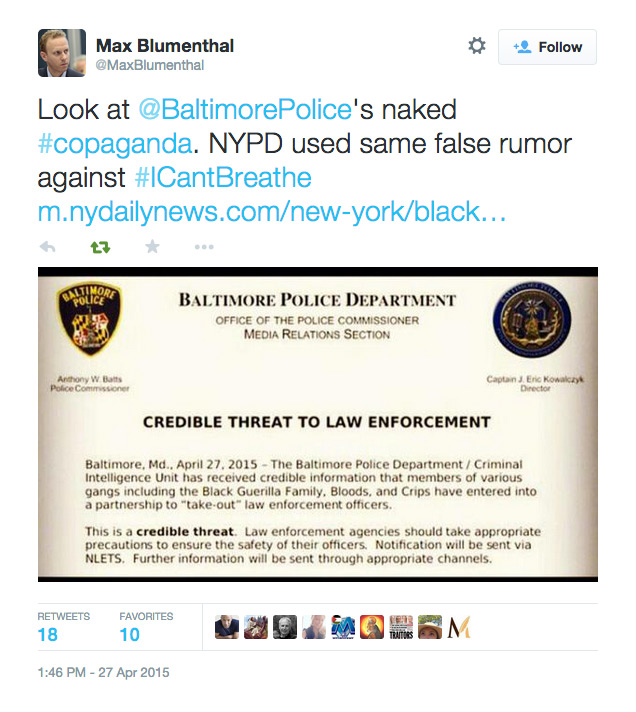 Riots Are Starting Up: 4PM EST
A police officer was just injured as the crowds are throwing bricks at the officers. 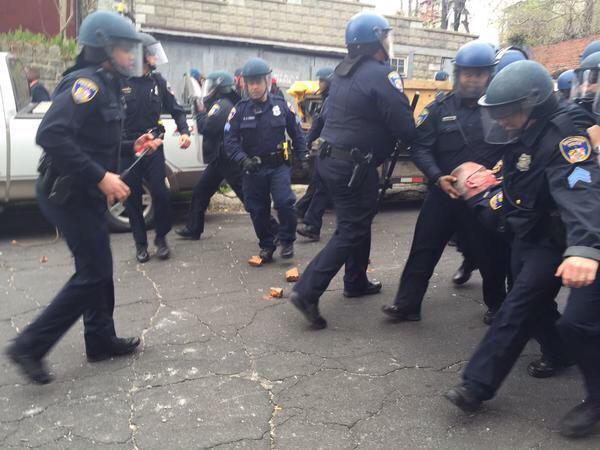 There's also many reports on Twitter that the Baltimore police tactical squads are prepared with live amo.

This is a developing story. More will be added to the opening post as it becomes available.

Vasa Croe
+12 more
posted on Apr, 27 2015 @ 11:28 AM
link
Well that went from bad to really bad really quickly. Baltimore is already a crummy place for crime and murders....this is going to be a very bad situation if they begin to make good on it. There are plenty of gang members that would kill a cop for the street cred....I can only imagine all the ones that are wanting to show what they can do so the older members can see they are "hard".

I can't see this playing out any other way but bad....

Asktheanimals
+20 more
posted on Apr, 27 2015 @ 11:33 AM
link
Reminds me of the original Black Panther party days without any socially redeeming value. At least the old BPP did some practical things to help their community a bit like Al Capone "winning the hearts and minds", lol.

I'd care to bet the FBI has all the names they need to take down this threat but something tells me they'd like to give it some rope and see how far they can run with it. Another publicity stunt to further divide the public over the issues at hand regarding minorities, poverty and violence from them and the police.

Sadly, this will turn good cops and innocent civilians in to collateral damage in the big game of divide and conquer.
edit on 27-4-2015 by Asktheanimals because: (no reason given)

This is not going to end well. Hope cooler heads prevail, but, I don't see that happening.

posted on Apr, 27 2015 @ 11:36 AM
link
Another sad fact is that Baltimore is just the place for this type of thing to start.....the gangs mentioned are across the country...guessing a call to arms has gone out to all of them and not just Baltimore....likely we will hear of other credible threats in the coming days stemming from Baltimore.

I pointed out that this was going to happen a while back if police officers didn't start walking a straight line, and I think THAT is just the beginning.

originally posted by: Skid Mark
a reply to: SkepticOverlord

Almost? 'Cmon, make a commitment! I have no doubt that there's an agenda imposed by outside agitators, and the benefactors are not John Q Publics.

Damn, didn't think about that! Being two hours south of Chicago, we have our share of gangs 'round here.

As Vasa said, these gangs are scattered all across America, I can see this escalating rather fast.

I wonder if this a Nationwide threat against Law Enforcement? The gangs are certainly in every Major Metro.

The US public has no ability whatsoever to differentiate a real threat from a false flag operation.

The PD's and FBI handle all the evidence. They lie.

This is not going to end well. Hope cooler heads prevail, but, I don't see that happening.

I don't think the mayor was getting the outside help she asked for or needed. This is a common tactic, used by law enforcement internationally to contain the area of damage if they know they are outnumbered. And I notice most internet quotes leave out 'so we could be in a position to deescalate'. It is easier to let one area go, try to box in those doing damage and have personnel to respond in the rest of the city.
edit on 27-4-2015 by reldra because: (no reason given)
edit on 27-4-2015 by reldra because: added

originally posted by: Skid Mark
a reply to: SkepticOverlord

Someone is behind the scenes: Racist cops abusing their power and murdering people and getting away with it.

All the protests are just decades of pent up anger, finally finding a voice. FTP.

Baltimore is the roughest city I've ever been to (and I currently live in Atlanta). Its too bad the protests have been hijacked by violence.. It is a little suspicious how things have turned so bad.. law enforcement has been known to go undercover as provocateurs. Best way for a protest to lose credibility IMO.

If it does blow up in to full out war, there will be lots lives lost.

posted on Apr, 27 2015 @ 11:48 AM
link
I have heard over the past year many references that Obama will be the last president and that there will be no election in 2016 because of the economic crash and Marshall law being imposed .The frequency of the subject is increasing and movement on the street's of America with social media posting these acts of violence towards civilians are fueling a confrontation with the establishment . It seems more a matter of when then if, if ..
edit on 27-4-2015 by the2ofusr1 because: (no reason given)

originally posted by: KawRider9
a reply to: Vasa Croe

Damn, didn't think about that! Being two hours south of Chicago, we have our share of gangs 'round here.

As Vasa said, these gangs are scattered all across America, I can see this escalating rather fast.


Yes, any urban area could find itself at risk.

In the event of a gang vs cops war, the cops will have their hands full at the very least. The lack of police presence in other areas will make other criminals that are not in gangs more brazen about their 'business'.

It could get scary for some folks out there.

I knew this was going to happen eventually. This is only the beginning. Average citizens made to feel like criminals by law enforcement will identify with the hardened real criminals and even idolize them.

While average citizens probably wont engage in all out war with law enforcement, they will not help either.

This will become a national problem. It wont ever amount to much as far as changing things for the better, but it will get countless cops killed.

This is only the beginning. It will reach our prisons soon, if not already. Without the prisoners to self imprison, there will be chaos. You have potential armies behind bars...and only some metal and concrete keeping them at bay.

This is not a good thing.