"A man was found dead inside a car that crashed through the gate at the National Weather Center on the campus of the University of Oklahoma on Thursday.

Police say the car rammed through a gate at the Weather Center and was fully engulfed in flames in a parking lot. Witnesses said the car was filled with smoke before the crash.

A bomb squad was called in and detonated an item at the scene, but has not released information about what that item was, according to KOCO.

Police believe the man may have committed suicide. An investigation is ongoing.
"


Here is a pic of the car fully engulfed in flames. 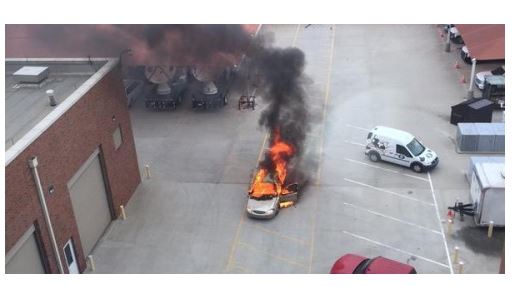 It appears that this was sadly a suicide.
None of the info points to it being anything nefarious but I still wanted to post it in case it is more or if anyone can add to it.
edit on 26-4-2015 by opethPA because: (no reason given)

Painful way to express yourself. Lethal.

Nice work.
I hope the person didn't have children.

The National Weather Center (NWC), located on the campus of the University of Oklahoma, is a confederation of federal, state, and academic organizations that work together in partnership to improve understanding of events occurring in Earth's atmosphere over a wide range of time and space scales.

There is or was a hurricane forecaster named William M. "Gray" who tried debunking global warming theories.

Gray is skeptical of current theories of human-induced global warming, which he says is supported by scientists afraid of losing grant funding[5] and promoted by government leaders and environmentalists seeking world government

originally posted by: Phage
a reply to: butcherguy
You mean a sort of evolution in action sort of thing?
Darwin award?


No.
I just don't want children growing up without one of their parents. I should have specified young children.
Suicide is very unfair to the people that love the perpetrator.

Self induced eugenics though, it may have something to it.

Probably belonged to th "engineers for truth" organization.
Lost their job for being a nutter by calling out the government.

originally posted by: Phage
a reply to: butcherguy
Yes, there's that too.

Self induced eugenics though, it may have something to it.


Maybe he was protesting the chinese occupation of tibet.

originally posted by: yuppa
Why do i feel liek getting some bar b que now? hmmm.


Empathy.......Death is not funny. This man was someone's son. I used to laugh at misery but I have found the older I get the more I appreciate life and pain. While I do not feel sorry for him because his choice was selfish and dangerous for others I do feel sorry for his family and loved one's.

Bottom line if you find humor or joy in death and misery you need to rethink things a bit.
edit on 27-4-2015 by SubTruth because: (no reason given)

The car crashed the gate and traveled another 100 yards to just the right spot for the black smoke to attenuate those receiver dishes.

Since someone opened the drivers side door after the car was engulfed in flames perhaps its a warning to the Gray car owners "children" ?

Or did the Gray car owner just stick an already dead body in the car and brick the gas pedal, in which case it is someone elses "children"?

Almost no damage to the nose of the car so maybe its Jonathon Livingston Seagulls "children"?

I predict a chemtrail connection will be found.

posted on Apr, 27 2015 @ 02:02 PM
link
I will not believe it to be a suicide until I see the ME's report on cause of death. Cars can be remote controlled with a dead person inside setup to make them look bad, especially if they investigating something controversial. This is done in an effort to completely discredit anything that may surface which was discovered by the alleged suicide victim. If there was heroin in his system, I am calling murder.