Notice that the title of the prophecy is "Blood Red Moon Over Passover" and that 13 days was mentioned repeatedly in the prophecy.

Passover ended on 11th April 2015. 13 days after Passover we had the huge 7.8 magnitude earthquake in Nepal that has killed many people.

We also had the volcano in Chile erupting at about the same time. The volcano was smoking at the same time of the Nepal earthquake. It continues to smoke putting many lives at risk. There were also reports of a massive avalanche on Everest caused by the earthquake. This avalanche will look like smoke from a distance, so you could argue this is also fulfillment of the prophecy.

Here is the prophecy on Youtube posted on 5th April 2015:

Where's the plane crash and the assassination?

Also, the earthquake and eruption happened in 2 different places yet the "prediction" is for the same place.

I'm just going to go ahead and disagree.

posted on Apr, 25 2015 @ 07:23 PM
link
I don't know the Sol Dog, but we did just have a massive earthquake and a smoking mountain, and only a couple of weeks ago there was certainly a plane crash that made the news. Let's give him the benefit of the doubt and see of an assasination comes along, too. a reply to: TheTimeMachine

IMO - many times, animals have displayed strange behaviour just before natural disasters (beachings / erratic family pet behaviour) suggesting a psychic connection to the Earth which we cannot yet fully comprehend.

Again, imo, it's not unreasonable to suggest that this "connection" spills over to some of the humans occupying this planet.

In some circles, Sollog is called the modern day Nostradamus. 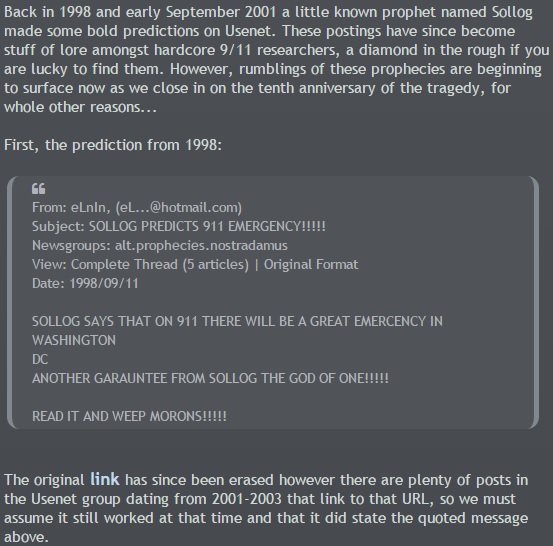 www.abovetopsecret.com...
edit on 25-4-2015 by Sublimecraft because: edited screenshot for my friend below

something about that screen capture (supposed 911 prediction) just doesn't seem right... maybe someone else will notice it too?

Except that the predictions were specifically for the 24th so including a plane crash from weeks ago does not legitimize the prediction.

In these threads there should not be a benefit of doubt. If they are sure enough to make a prediction and they are wrong, then it is wrong. You can't edit afterwards to make events fit better.

My god. He even specifies WHICH FREAKING DAY HE MEANS.

Can you enlighten me? Send me a u2u if you don't want to post it? I'm curious as all hell and not sure what you're referring to...?

Disclaimer: this is not a troll.

I was checking out his website and Nepal is not even listed under his Quake Predictions Asia.

For someone calling themselves the New Nostradamus... he sure has a website that looks like Old Geocities.

Apologies Mods, but an explanation is necessary. My computer defaults to PNG format (my preference) for screenshots and is usually well above the 500kb limit, which means I usually have to further crop images to come below that threshold - in this instance I cut it off just after the word DC which bought it to 335kbs - thus you did not see the component I have now highlighted. I then went back to the original screenshot and saved as .jpg which gives the whole shot. 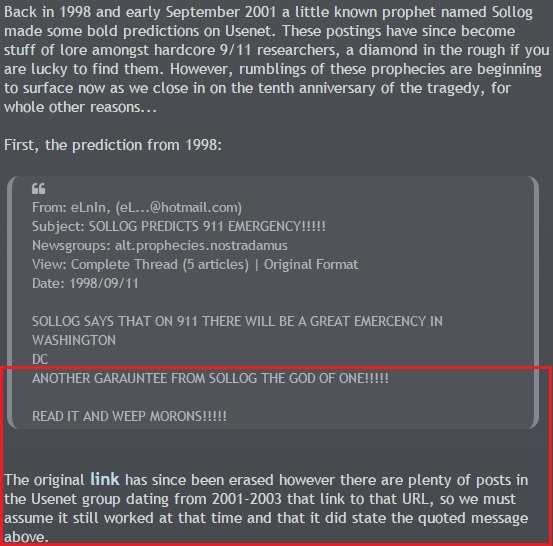 I would be impressed if his 9/11 prediction indicated New York or Virginia. I really dislike open ended predictions that can be reinterpreted to fit.

Or ones in which other people apply their own tidbits to in an effort to add more substance and traction....

posted on Apr, 25 2015 @ 11:28 PM
link
I don't see where anything he predicted came true. If you want to fudge dates and locations, and only focus on one small part of what he said, then I guess you can say he was correct. Doing so would be incredibly dishonest and incorrect, though.


originally posted by: AnuTyr this was one of my predictions for the new year. Were only one quarter into the year getting close to half. There will be more. Lots of storms, Lots of floods. And severe droughts as well as one major earthquake that will be over 7 magnetude. enough to cause some serious damage. The Med is due for a typhoon soon that will reach landfall. The Philipines already had their hurricane, same as Indonesia so those 2 things already happened pretty early on. Flash flooding and tornados ripping up the US. Did i leave anyone out? Oh right, Major Earthquake off the coast of California to occure. And some more hurricanes, more tornados and earthquakes and flood and everything for almost everyone! Have a nice 2015. And remember, If the corperations don't cut their act. It will only be made to get worse. And to target major population centers until the people get the message. Severe algae blooms. Pestilance and death is forcast for this and next year. And Japan is due for another Earthquake.

posted on Apr, 26 2015 @ 06:54 AM
link
I totally forgot to mention the volcanos, Why do i forget volcanos. I just kinda viewed it all as flaming destruction, with the planet trying to purge its inhabitants in multipul ways so it just kinda gets all lumped together.

lol... talk about confirmation bias. just sounds like a lame poem about the apocalypse to be and the revelations and what not. Like maybe 13 days before it occurs or some # like that.