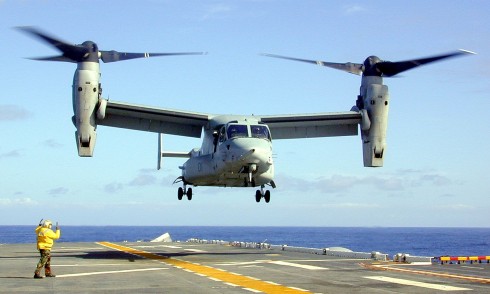 The V-22 Osprey has been the subject of much skepticism and concern since its' inception. Many accidents and deaths have occurred in the development and deployment. What people forget is like all works in progress the end result can be a fantastic platform. While it is limited in its lift capabilities in comparison to the CH-47 Chinook and holds fewer troops, the Osprey is faster with longer range and will be more versatile when adding in the element of gunship. That day is near. DARPA has been steadily and successfully testing forward and rearward weapons over the last six months. Although a 360 degree gun to replace the ramp mount system still isn't completely figured out there have been tests with weight and space being the major drawbacks.

In March the Osprey launched the AGM-17 Griffin Air-to-Surface Missile.

According to DARPA, the MV-22 launched an inert AGM-17 Griffin air-to-surface missile from a range of 9 km from the target, scoring a hit.

In addition the AeroVironment Switchblade loitering munition was released.

Marines fired a small airborne drone capable of carrying explosives from the back of an MV-22 Osprey in a test that could offer the tilt-rotor aircraft a new weapons potential.
Called the Switchblade, the drone was initially developed as a small intelligence, surveillance and reconnaissance (ISR) aircraft. Marines at Twentynine Palms, Calif., attached one of the tube-launched drones atop an Osprey for a test attack-launch.

This all is a follow-on to the successful test of forward launched 2.75 APKWS or Advanced Precision Kill Weapon System 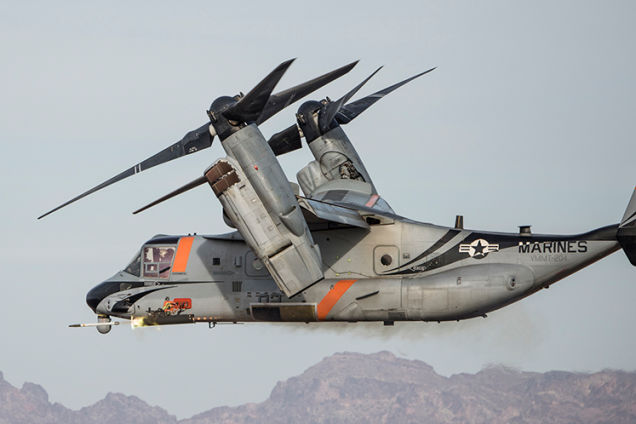 These 2.75 laser-guided rockets are ideal for lightly armored and soft targets, such as armored cars and dismounted personnel. Additionally, they have a long enough range so that the firing aircraft can stay largely outside the threat envelope of small arms fire while engaging targets. Also, the fact that seven of these individually targetable rockets can be packed into a single pod makes them very attractive compared to larger missiles.

Adding to the awesome death from above capabilities the cool General Dynamics "Flyer 72" off-road fighting vehicle fits in the cargo bay. 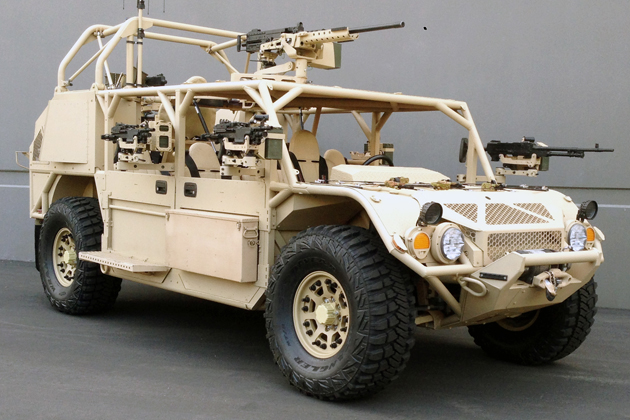 General Dynamics already has base configurations for the Flyer in a light strike (armored or unarmored), rescue and personnel recovery, reconnaissance, communications and C4ISR (Command, Control, Communications, Computers, Intelligence, Surveillance and Reconnaissance) that can include the mounting of a small unmanned aircraft system, weather station, and/or different optical and radar target acquisition systems. There are also sub-configurations for the Navy SEALs, AFSOC, Rangers, MARSOC and probably Delta Force, although that one is not disclosed (a normal occurrence). Basically, the vehicle can transform into whatever it needs to, as long as the accessories and subsystems will fit inside the aircraft's hold that is deploying it.

The Osprey often shows up at my local Muni airport for refuel and I have to say I am falling for this beast like a new puppy.

During the PCAS test the missiles left the rails two minutes faster than the requirement.

originally posted by: the owlbear
It's only taken it, what?, 20-25 years? How many cost overruns?
Lookit! It's fancy!
I would like to know how many lives lost versus lives saved this beast has for its development and usage record.

posted on Apr, 23 2015 @ 05:00 PM
link
Live near fort AP Hill and see these things fly low all the time. Always awesome and one of these years I'm gonna wreck watching them.

Sorry to whore your vast knowledge, Zaph, but I did...
I was a child of the '80's so the Osprey was HUGE for anyone interested in aerospace at the time. Followed development and heard about nothing but how crappy it was, etc. Yeah...it was the f-35 of its time.

It was. After the accident where it flipped and killed 19 people they grounded them and made some significant changes. They informally call it Osprey 2.0. Since those changes were made the safety record changed radically.

I honestly don't know of a single airframe in any military assignment that hasn't crashed and lost lives. I would completely defer to those more in the know but it happens all the time and even with the most dependable platforms and pilots. This bird was on the chopping block and they just kept after it. Advances in computer tech helped in a huge way and it didnt hurt that a former president was enamored with it.

Exactly. Make it an aircraft that can't decide if its an airplane or a helicopter, and tries to be both, operating in a punishing environment, and you have much more potential for disaster.

posted on Apr, 23 2015 @ 06:28 PM
link
For something that was groundbreaking in its day its done well..It will further mature I think and pave the road into something better.

hopefully they have most of the tilt-rotor issues worked out if they move ahead with the V-280. That thing looks like a blackhawk with rear splits and tip jets to boot.

originally posted by: StratosFear
a reply to: howmuch4another

Agreed but don't forget the S-97. That thing will have gunship variants that will make all of our jaws drop I'm sure.

It's the AW609 now. First flight was 2003, and it's been extremely slow. They've accumulated an average of 100 hours a year of flight time since first flight. That includes long periods without flying at all.

so the next gen. I looked it up after I typed and didn't realize Westland had gotten into the mix. I guess I stopped considering Agusta and Bell separate entities long ago. maybe thats flawed.

This thing is awesome. Why cant we make the helicopter things from halo and avatar? That would be cool.....lol