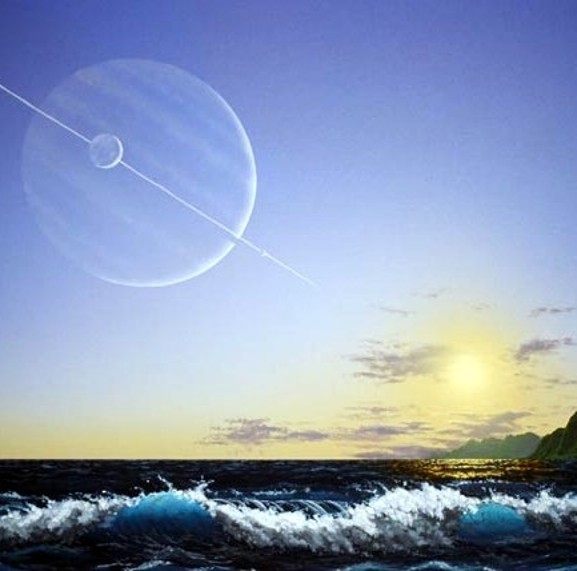 October 1995 - First Exoplanet Around a Normal Star is Confirmed - Could the first moon around one of these planets be found almost 20 years later?


Previously I have posted a couple of threads on the subject of Exomoons. Long a favorite locale of many sci-fi stories, moons around large planets around other stars are also a holy grail of exoplanet research.

It is even possible that habitable, Earth sized moons could orbit gas giants around distant stars, warmed by a combination of stellar flux (heat from the star the planet it orbits revolves around) and tidal heating.

Furthermore, a giant planet could have more than one habitable moon which might greatly increase the odds of finding life because instead of just having one or two potentially habitable bodies, a star system with a gas giant in the right orbit to harbor habitable exomoons could have three, four, five, perhaps even more.


So places like Pandora or Endor may actually exist and be among the most common places life calls home in our Milky Way galaxy and in the universe in general.

My first ATS thread on this subject was almost a year ago May 2014. Also in January of this year I detailed astrophysicist Sara Seager's New Years prediction that the first exomoon detection could come as early as this year.


I followed that up with another thread in March detailing the HEK project, Hunt for Exomoons with Kepler and the detection limits of that project. 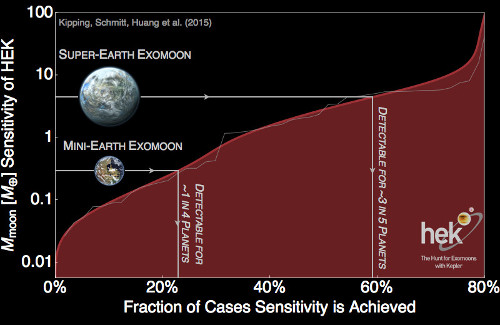 Consider this an update.

Today in keeping with my interest in bringing you "the exoplanet news before it's mainstream news" I point your attention this paper to be published in Astrophysical Journal called "On the detection of Exomoons: A search in Kepler data for the orbital sampling effect and the scatter peak." by Michael Hippke.

If you don't want to read through the highly technical details I will summarize them in a very basic way:

1. A new technique called OSE (for Orbital Sampling Effect) has been developed to tease out the signature of exomoons in archived data from the exoplanet hunting Kepler spacecraft.

6. The paper's authors are skeptical about the potential Kepler-264 b moon because it would be quite large in relationship to the planet it orbits. A quote from the paper: "As summarized in Table 3, no OSE-like signal passes all tests. Nominally, Kepler-264b has the best result. However, its OSE fit gives the most extreme values for the moon radius (Rmoon = 1.6 ± 0.2R⊕ orbiting a 3.33 ± 0.74R⊕ planet), raising serious doubt about its plausibility. While likely physically possible, it is unclear whether such a configuration can be real. On the plus side, different detrending methods give consistent results."


SIDENOTE: Personally I do not feel this a convincing argument against the moon's existence. There is nothing that I know of which would prevent a Super-Earth sized moon from orbiting a larger Mini-Neptune type planet. It is a ratio not too dissimilar from the Pluto/Charon (dwarf)planet/moon ratio in our solar syste. As the author points out, it passes various detrending processes which give the same result.

The first exoplanet around a normal Sunlike star, 51 Pegasi b was discovered 20 years ago this year but the nature of it, a Jupiter sized planet orbiting a star closer than Mercury orbits our Sun, was something so unexpected that American astronomer Geoff Marcy, the man who discovered the most exoplanets, missed finding the first one because he didn't check his data for such a strange, nearly impossible world. A Swiss team did check their data and the planet, regardless of how strange it was, was real. Geoff Marcy was left to confirm their discovery rather than make it himself.

As Freeman Dyson once said: "Don't look simply for what is likely, look for what is detectable. He said that because when we only look for what we think is likely or exclude data which seems to show something unlikely, we might miss out on making a groundbreaking discovery, as Geoffrey Marcy found out the hard way.

The paper also acknowledges this:

At first glance, the high moon radii of the individual putative moons seem implausible, as there is no such large moon in our own solar system. However, our solar system might not be the norm – we have no Hot Jupiters, warm Neptunes, or Super-Earths in our solar system, and thus no reference for typical moons around such planets. Also, there is a strong selection bias, based on the detection limits (section 4.4), and in addition the simple fact that the strongest dips are most significant. The first moons to be found will likely be at the long (large/massive) end of exomoon distribution, as was the case for exoplanets.

If all candidates shown in this work turn out to be noise only (or detrending errors), then we should still consider the OSE as a powerful tool for the detection of exomoons or binary planets. Such a result would point towards necessary improvements in detrending algorithms, red noise treatment and modeling stellar noise, including spots and rotation. On the other hand, confirmation of any one candidate would make it an immensely useful method. In our solar system, a wide variety of large and small moons exists. This, together with formation theory, may lead to the conclusion that moons do exist outside of our solar system, i.e. ηExomoon > 0.

7. All 6 candidates could also be false positives (things which mimic the signature of an exomoon like rings around a planet, starspots, or other noise in the data or artifacts from processing) and the paper stresses this is perhaps the most likely explanation for the candidate exomoons.

8. Nevertheless the possibility of a moon being detected around Kepler-264 b is certain to be further scrutinized and it could very well be the first such moon detected and confirmed though the paper is clear that they are not claiming that. (see the excerpt from the paper's conclusion below)

“What is not disputed, is not particularly interesting”– as explained, we do not claim an exomoon detection in this paper, but only present methods and tests to consider them candidates. The detection of exomoons is at the limit of current photometry, and its methods and tests need to be checked, challenged and verified.

Stay tuned, this could be a very interesting year indeed.

The paper I referenced can be read in full here.
edit on 23-4-2015 by JadeStar because: (no reason given)

posted on Apr, 24 2015 @ 09:32 AM
link
interesting because at that radii it could still have gravity nearly equal to earth because of the way the equation of gravity works. In other words it might be comfortable place to live for humans as far as gravity is concerned.

originally posted by: stormbringer1701
interesting because at that radii it could still have gravity nearly equal to earth because of the way the equation of gravity works. In other words it might be comfortable place to live for humans as far as gravity is concerned.

I truly believe the first place humans will live outside our solar system will be on a habitable moon of a much larger planet. It's simply a numbers game.

There are more moons than planets and so the closest place that might be comfortable enough for humanity would be more likely to be a moon rather than a planet.
edit on 24-4-2015 by JadeStar because: (no reason given)

Your impatience is shared by astronomers

We call can't wait for a new instrument to go on line, a new dataset (c'mon GAIA!!!!), a new technique developed to its full potential, etc.

That said, things are moving along rapidly but I'd still like to see a lot more in the way of support for the field overall.

Star for you. That's amazing research!

and weather detected on 4 exoplanets.


Because it is bright and is distant from its star, the planet VHS 1256b can be observed across a full spectral range, from radio/millimetre waves to the ultraviolet and X-rays, passing through the infrared, which can reveal phenomena impossible, or very difficult, to measure for other planetary systems. These include the impacts of comets, or the detection of moons similar in size to the Earth.