Zahi Hawass Storms out of Debate with Graham Hancock

Thanks for the interesting update on the larger picture, Scott. Disappointing and not surprising, I agree. Hawass seems to have been pretty consistent over the years in his denials of any theories conflicting with traditional Egyptology, and with his poor argumentative style. Hancock is right in his assesment that Hawass makes Egyptology look bad with his closed-minded approach, in my opinion.

As far as Graham Hancock, I thoroughly enjoyed his "Fingerprints Of The Gods". I thought he laid out his information pretty well with that book, asked a lot of the right questions without jumping to too many wild conclusions. I do recommend it from time to time. Not too many people who will read that thing and then come back and tell you that there is nothing enigmatic about our ancient history and archaeology.

I suppose I should ask as I'm replying, what are some of your favorite examples of the enigmas in our history and archaeology?

posted on Apr, 23 2015 @ 02:08 PM
link
Why would Hawass even debate a known fiction author?
Here's a thought,
Maybe he got paid a good sum of money by the ones profiting from hoax productions like Ancient Aliens and the like. Gives them a talking point and Hawass gets a pile of money for harrumphing through the scene. Beneficial to all partys involved.

Zawass is such a child.

originally posted by: andy1972
...had construction skills that we today find hard if not impossible to emulate...


If these are the kinds of things that would come up in said debate...I wouldn't waste my time, either.
2nd.

I generally agree, but take my profession: As a graphic designer, I can only listen to the same person tell me that Hillary Clinton's campaign logo is awesome so many times before I either get excessively irritated or I just walk away and ignore them.

Sure, in some circles (obviously at Pentagram, who designed it) it may be considered awesome by all evidence that they have, but that doesn't mean that they're correct...and they could argue the converse against me.

My point is that sometimes those in one area of the profession don't always agree with those from another area, be we all take the data and evidence that we have and come to a subjective conclusion. And it's human nature to (a) believe you're right and to (b) get annoyed arguing against something that you truly feel is rubbish.

But I do agree that, since Hawass signed up for a debate, he should have shown a much higher level of professional courtesy--but knowing how he is from reports and watching him on numerous shows, this behavior seems to align with his true temperament. This is the main reason that I don't like him much.

posted on Apr, 23 2015 @ 03:00 PM
link
Joe is a good guy. i think allot of people are missing out. He is pretty insightful as well as funny. the show where he had Mr. Hancock is pretty good, its on youtube if anyone wants to watch it(one of many)

originally posted by: MystikMushroom
I can't for the life of me find it, and I don't know if it's T&C/ATS appropriate -- but Joe Rogan's take on the pyramids at Giza is hilarious.

I'm with Joe on the pyramids. I bet the ancient Egyptians just took credit for their creation, and sort of "moved in" to them. When you break down the numbers of how many blocks make up one pyramid, and divide that by the number of years mainstream archaeology tells us it took to build...it's insane.

not knocking your theory, but hancock is not just some dummy that writes fiction. and who's to say that just because someone writes fiction, that their not well versed in all manner of subjects, even to the point of being able to debate scholars of other fields. on that note Arthur C Clark comes to mind.

plus Hancock holds a First Class Honours degree in sociology, from Durham University.

He did this simply because he knew Hancock would have won the debate hand's down, so how to keep the old ball rolling and the money flowing in to the egyptological establishment, another reason is national pride and the fact the evidence and interpretation of evidence that hancock would have presented may well have proven the likely hood of a different race, though I believe they would still be ancestors of the coptic egyptian's the arab egyptians would have there nose well and truly put out by the fact that there ancestors had nothing to do with the ancient civilization.

Rememeber the stelae at the sphynx only spoke of the pharoe renovating the sphynx, and the same may have happed at the pyramids with a classical period egyptian overhaul or renovation of much earlier structure's, the small peice of wood found by the robot being the only argument against this and we have seen how carbon dating can be corrupted before such as the death bed confession of the guy who led the team to analyse the turin shroud who admitted it was probably much older than there findings as they sampled later material that had been sown into it..

New finds' such as the Pyramid builders graveyard may well relate to the pyramid renovators not there original builders and of course once again it is a matter or prestige and reputation as well as national pride for mr Hawass.

Even the inscription in the vaults over the king's chamber is a likely forgery by a british officer who blasted his way into them.

Of course they want to make Hancock look like an idiot but all they manage to do is to heighlight the fact they are frightened of a genuine debate against him and his own scientific evidence that is actually better researched than there own much of which is still rooted in victorian assumption.

posted on Apr, 23 2015 @ 03:46 PM
link
Graham Hancock and his Fingerprints of the Gods is a widely discussed topic on ATS. Through the years he has been the subject of one of the fiercest attacks on this board. I remember especially the member Marduk who was obsessed in name calling him every chance he got. But we also have a handful of other members who strongly oppose G.H theories and his books. I'm just waiting for them to come in this thread. Then get some popcorn, sit down and watch the show. lol

They will shortly you are correct, a lot of them are know it all's and think that they know the past they never lived in but in there defence Graham Hancock doese have to sell book's and author's have a long history of twisting fact's even though on this occasion I think he is correct.

originally posted by: ItCameFromOuterSpace
a reply to: Scott Creighton

Zawass is such a child.

I'd say he is more of a Daddy protecting his child.

Just my personal opinion but Hawass is an idiot and one of the single worst things to ever happen to historical research. He single-handedly set research behind by decades with his constant interference of anyone's research who didn't completely (or nearly completely) align with is own. Glad he's finally shown himself to so many.


plus Hancock holds a First Class Honours degree in sociology, from Durham University.


Would you hire a plumber to fix your leaky roof?

The whole ancient Egypt thing just doesn't resonant with me. It all seems to be mystery for the sake of mystery.

In other words no real substance.

Reading about other ancient civilizations such as Celtic, Greek, Sumerian I come away feeling I've learned something or been enriched in some way. Ancient Egypt, not so much if at all.

Maybe this, in his arrogant way, is what Hawass wishes to keep hidden.

yea i have had plumbers do roof repairs that were needed, vent stacks and such and they do a great job. 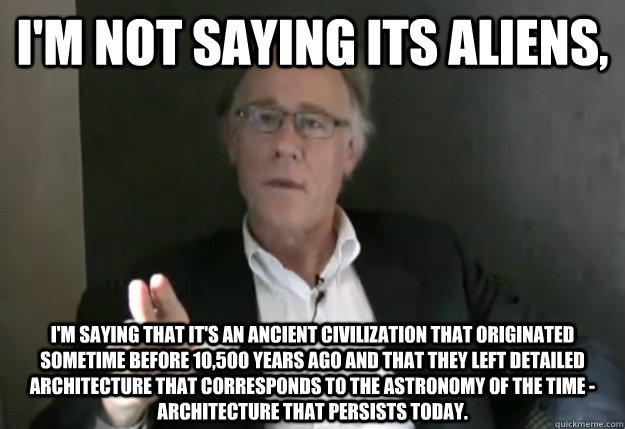 I've not followed this guy at all.
But is this his theory?

Generally speaking, he tries to show evidence for there being a pre-existing advanced civilization, that was perhaps wiped out, but left traces through both monuments and also perhaps survivors who perhaps influenced such civilizations as ancient Egypt, Sumeria, maybe those in Latin America, etc.

I recall seeing an Egyptologist from York University who was an expert in the 18th dynasty ... She was given permission to investigate a "Mystery Mummy" ... she identified the mummy as Nefertiti and also concluded Nefertiti's mummy had suffered fatal slash wounds to her back as well as other interesting finds which substantiated her claims ... He had her banned from any other investigations
edit on 23-4-2015 by artistpoet because: add

To those suggesting Hancock is a fiction writer - Only his latest book!

I've read 'Finger Prints of the Gods" and I can say that I don't agree with everything that Hancock puts out there. But I will say that I do agree with a lot of what he has in there as well. I have always had several issues with the way archeology is portraying things.

1.After wandering around in a desert,people all of sudden leap up and start building massive building complete with needed knowledge of how to do so.
2.After wandering around in the desert,these same people come with a complete and solid religious belief system,as well as a hierarchy and social system that is complete and solid.
3.The Sphinx once seen obviously has a much smaller head than body,yet was built by the same people that were very very skilled in making sure that no matter what scale they were building on,they always had things in proportion.It was very important to them to not do a mere representation of a human,but to make it look like a certain person with the body in the proportions they wanted. Yet they just said the hell with it on the Sphinx's head?
4.The weathering pattern on the body of the Sphinx just doesn't add up. This is a statue that has been buried several times and had to be dug out of the sand in the past. What happens to something buried in sand? It is protected from the elements. I have never heard of the pyramids being dug out though. Yet they are right there too. So why is that? How long does it take to bury something that large? And why if the pyramids were there,weren't they buried at least partly as well? And while buried,how did a water pattern end up running down the sides of the Sphinx? In pictures I have seen the Sphinx depicted as being in a lush tropical area,yet that has been desert for how long? The water patterns going down the sides show that at one time it WAS in a more tropical climate. So just how old is it?

Mr.Hancock seemed to answer these questions pretty well for me. He asked specialists about weathering on stone etc. to come to his conclusions. I find them plausible.

originally posted by: TinfoilTP
Why would Hawass even debate a known fiction author?

Hancock has only wrote one fiction book...recently...so...