posted on Apr, 22 2015 @ 05:23 PM
link
This will probably never happen but I have been toying for a while with the idea of retiring to Thailand. I have been looking at a lot of good websites on the subject and have watched numerous YouTube videos made by ex-pats on different aspects of living in that country.

People familiar with the Thai scene will be aware of many pluses and some minuses involved with living there. This is not really about all of that. I wanted to draw people's attention to one of the features of Thai law enforcement and the media coverage of it, that is very different from the same things in most other countries that I am aware of.

Specifically, in Thailand, when a criminal is apprehended, he and his captors pose, photo studio style, for the press photographer, almost like the volleyball team in the school yearbook. This is both comical and charming, I think. The lighter side of crime.

Here is an example and a link to the story of the "incident": 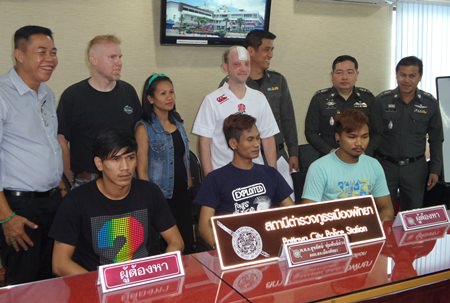 Three Issan men were charged with assault and the British man they allegedly attacked was slapped with sexual assault charges after an altercation in Pattaya.

In the photo, posed like committee members, are, front row, the three charged with assaulting a British man, seen standing with a bandage on his head in the second row. This man, charged with sexual assault is standing next to the woman he is alleged to have assaulted and her Finnish (blond) boyfriend. Police officers complete the scene.

In Canada, and most other countries, this would be an unheard of assemblage. When I look at it, it brings a smile to my face. A lot of crime in Pattaya, though often very serious, sometimes has a comical side.

One of my favorite headlines, I think in the Pattaya Mail, was Confused Russian Tourists in Brawl with Ladyboys. (The Russians are making a big impression in Pattaya.)

Crime photography, including things like bloody traffic accidents and suicides, is very lurid in Thailand. Perhaps it is meant to warn against dangerous situations. Not much of that sort is kept from the viewing public, in the print media at least.

I thought people might be interested in this peculiarity of Thai life.
edit on 22-4-2015 by ipsedixit because: (no reason given)

posted on Apr, 22 2015 @ 05:30 PM
link
Kind of trophy photos, huh? Posing with your quarry? Dudes in military uniform look eager to get to the punishment part…

It's definitely a trophy photo. This photo is very typical of the "after the round-up" shots taken at the police station in Thailand for all sorts of crimes.

group mug shots. I bet they have fun looking through the photo albums.

dude second from right looks sadistic, like the warden in Midnight Express…

Anyhow, if the red signs are to be believed - the men sitting down are not technically criminals - they are suspects.

ผํ้ต้องหา = person that must be searched for (i.e. "suspect")

Then again, in Thailand that could just mean "innocent Burmese person."

Russians certainly do make a good impression in Thailand, don't they? Pattaya....Koh Samui...

Lived there for 6 years..could go on and on - look at the suspects' faces. They know their about to be treated to some police brutality.

posted on Jan, 18 2016 @ 09:48 AM
link
He acknowledged that the tourism industry is undergoing widespread change and is shifting from what he called the three S’s of old tourism. That is, the tourism industry is shifting away from Sun, Sand and Sex to what he sees as the emerging three S’s in the new tourism, namely, Serenity, Sustainability and Spirituality, Daniel Zopoula.