New ATS Poll: What Is Your Political Affiliation?

page: 1
61
<<   2  3  4 >>
log in
join
share:
SkepticOverlord
+9 more
posted on Apr, 22 2015 @ 04:55 PM
link
Politics has long been a hot-topic here on ATS. Recently, we saw a threat that presumed ATS was mostly conservative in nature: Why is ATS so Right Wing? The short answer to that is: ATS is generally anti-establishment, and the current establishment is "left-wing," so naturally it may appear that political ideology here leans to the right. But where does it really lean? How do our members and visitors stack up? And, how is that different from the general public who doesn't look as deep into current events as we do here?

Skadi_the_Evil_Elf
+18 more
posted on Apr, 22 2015 @ 04:59 PM
link
I think a lot of it is perspective. Conservatives think I'm a flaming liberal. Liberals think I'm a closeminded conservative. Yet neither is true. My political leanings no longer fit into the spectrum. 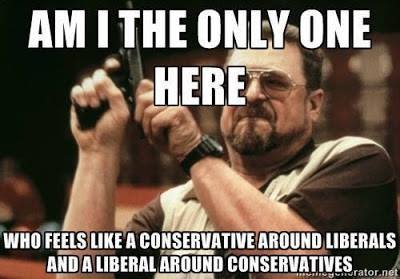 posted on Apr, 22 2015 @ 05:07 PM
link
With just a few responses, this is going as I thought it would. I think most of us would be in either the Libertarian or the little bit of both category. And probably the vast majority are simply anti-establishment as you say.

The only term I know from that list is anarchist, but I'm not. I have no clue about all the other terms and not sure if I want to know what they mean. It used to be easier when we had left and right. The left was linked to revolution and the right to the rich class. I think today all politicians are rich and corrupted.

Now you tell me which one in that list describes me please?
edit on 22-4-2015 by Trueman because: (no reason given)

posted on Apr, 22 2015 @ 05:11 PM
link
This is a good way to categorize us when the reaping begins. No offense SO, but the government has been trying to label us as freedom loving terrorists for a while now. The less they no about my political stance the less evidence they have when I get detained for defending my rights. I'll just make it easy and say I'm a free thinker who takes it as it comes.

I think we could get a more accurate picture if we split it between "fiscal" and "social". For example, Libertarians are fiscally conservative but socially liberal (or at least they are supposed to be).

The idea that we have to have our social and fiscal ideologies line up is the reason we have the two-party mess we're in. It's as if there's no clean-cut way to express our leanings without somebody putting you in the democrat or republican pigeon hole.

When the spectrum has Liberty at one end,
and Totalitarian at the other... then most
people will lean toward liberty.

The point is the spectrum of "liberal vs conservative"
is a false paradigm which serves the establishment.

I really had a hard time choosing between libertarian and anarchist.
edit on 22-4-2015 by watchitburn because: (no reason given)

posted on Apr, 22 2015 @ 05:13 PM
link
Are there any other previously complied poles from here at ATS to compare too when the results come in? It would make an interesting comparison to say the least.

I put I pick and choose.

I honestly don't think i'm hard core enough to be a libertarian as I do believe in some minimum safety nets and public services.

But I do think government should be kept as minimum and efficient as humanly possible and markets as free as possible.

I do acknowledge socialism can also work in the case of northern Europe country's, though I think those exceptions to the rule are due to small homogeneous populations.

I picked libertarian, but I also pick and choose at times on issues that have actual value.

Like healthcare is a great idea, but forcing folks to buy expensive plans and outrageous deductibles is honestly criminal IMHO.

Not to mention the fact the gov shouldn't be involved at all to begin with.

I don't consider myself liberal...not even sure what the modern definition of that is any more. And I'm certainly not conservative, which I consider a code word for Christian.

I guess I would be considered extreme liberal for my views on the environment. But I a big believer in the right to own guns, but yet I favor bigger, better background checks, but I believe in the rights of all LGBT people, but I hate all religions, even Islam, but i hate all taxes, but I want a smaller government, I want a smaller military, I hate police brutality, I favor states having more rights and the federal government having less, I favor ObamaCare (We pay for uninsured medical cost anyone...we really do, and My family has been without insurance before...pretty scary) I favor stronger national borders but I want amnesty for the illegal aliens that are already here, I hate the Alphabet agencies all of them, they should all be disbanded except for the FBI and the CIA ..that's all we need, I hate our two party system, I think senators and congresspeople should have 2 term limits...and that's that....

Maybe I sound like a Libertarian, but I really don't like Rand Paul and I don't want us to be an Isolationist country.

I'm all over the place.

ALL MEN ARE CREATED EQUAL

So far, politicians from both sides appear to ignore this fundamental tenet, however my political (I hate that word) affiliation is closest to him/her that EXECUTES policies based upon this philosophy - globally.

posted on Apr, 22 2015 @ 05:44 PM
link
ATS is a forum. It is neither this that or the other, I don't get then why a forum owner should predicate a poll of what its supposed to be about, when it clearly isn't.

At the risk of arguing the semantics of your statement that "all men are created equal" I must state that I never believed this to be true, at least in a literal sense. I think it would be more correct if the Founding Fathers were to have stated that "all men within this new system are to be given equal treatment, or equal opportunity" but there always were and always will be those that are born with little to no value to an organized society because of one shortcoming or another. While those who feel empowered to do nothing, contribute nothing and take everything they can from the system without adding any value are a problem, those greedy, lazy sellouts at the top who see the masses as a personal slave labor force whose lot in life is to slave to make these slime wealthy and keep them there are the biggest problem America faces today. The industrious masses in the middle are those that keep it going and the fringe element, at both ends are the ones that will tear it all down. How to avoid this decay is where we are today and I have no answers to the problem.