Magic the Gathering on ATS?

so i cant guarantee that this is the correct forum for this but...

Who plays Magic on here??

what decks do you use etc?

i play a few different mono green decks and a mono white deck, and i just love it

Green/white/blue. The gimmick is a lot of cards to draw a lot of additional cards (every turn if possible) and by turn 4-5 overwhelming the opponent with cheap creatures/tokens. When everything goes according to plan I can usually draw 3-4 cards, and have 4-8 new creatures per turn and then it's too late for the opponent to catch back.

Then a few more control cards (blue or white) just to steal or destroy the most interesting creatures from the opponent so I can dominate the late game. And beastmaster's ascension for the final blow when the game drags. I tried to keep mostly cards with very high synergies (doubling season/mycoloth/chasm skulker/mentor of the meek/...) so if I can survive the first turns then usually I always win.


Mono green I can deal with it no problem. Mono white is sometimes tougher if the opponent manages to get more creature than me before turn 4.

The biggest pain is the blue control decks though. I once played with a guy who did nothing but drawing cards and playing counters until his library was empty, and won with a creature that made this a win condition. Almost beat him but that was a terrible game that lasted way too long.
edit on 20-4-2015 by JUhrman because: (no reason given)

posted on Apr, 20 2015 @ 07:17 AM
link
Got two main decks I use....a HUGE green/blue dredge deck, and a red/white battalion deck. Both been tweaked, both pretty effective. AS the shirt says, I'd tap that so hard, it's controller wouldn't be able to uptap during their next upkeep phase.

posted on Apr, 20 2015 @ 07:38 AM
link
Awesome.. well although being a very Geeky adult, i never played it growing up, essentially only discovered it around Core set 2014, so im very new to it still in the grand scheme of the game, however going a little mad with it so -

i have my White soldier Deck, its mostly about preventing untapping, so various artifacts that prevent more than two cards untaping, creatures that when attack can tap creatures etc. i suppose its a horrible deck, but gotta love white soldiers,

Mono Green standard Hydra Deck, again its all in the name, mana ramping and BIG hydras

and a green black infect deck, its not a particularly pleasant deck to play against, as such my "Friends" generally dont allow me to use it,

i do love the game though and im looking to go to my first GP in august this year.

originally posted by: GonzoSinister
i never played it growing up

When I was still buying cards, many cards were still reaching ridiculous prices.

In each base pack there was almost always one double land (not the modern ones, the old, overpowered ones): 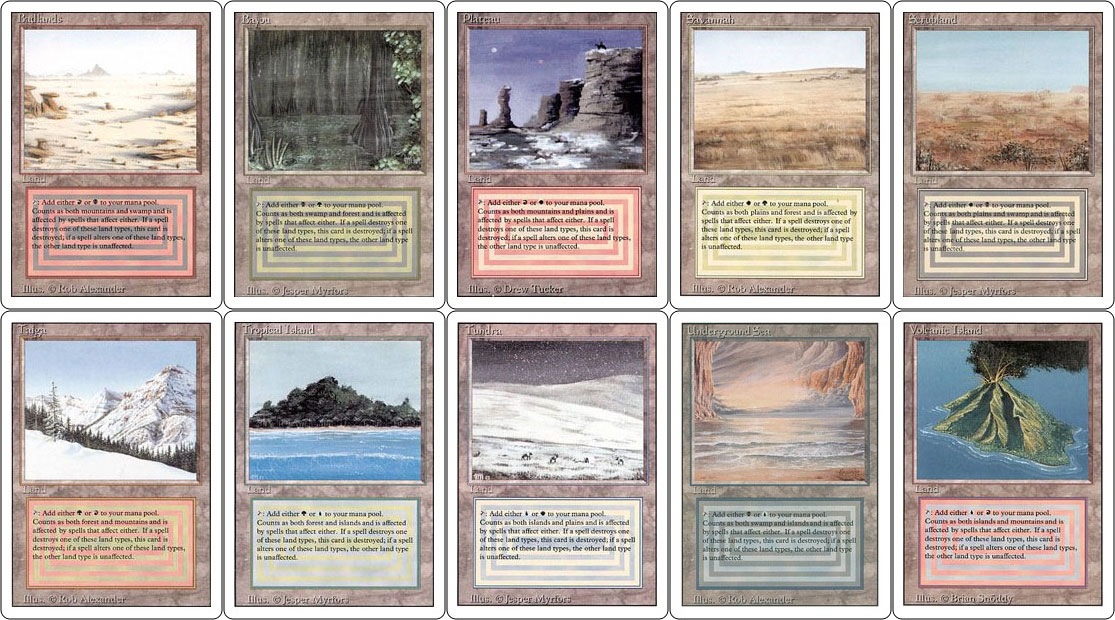 Selling any of these cards would cover the price of buying 2 more base packs. You get the idea it was easy to get money out of it if you were ready to part with the best cards

One day I sold all my collection and made a small profit.

I really loved the early editions, much less complex rules, straight to the point.

New cards are fun but with so many cards available it costs a lot of money to get the specific decks you are looking for.

i would love to get alpha or beta booster packs, mainly because if i got myself a Black lotus i would be in the money

i like the older cards, we as a group generally play Legacy (or at least, alllll cards) so i have a few of the nicer (in my opinion) old cards.

originally posted by: GonzoSinister
i would love to get alpha or beta booster packs, mainly because if i got myself a Black lotus i would be in the money

One man can dream

That's why I stick to the online version for now; cheap and easy to find opponents. You don't have the full range of cards, but still fun to play with.

I could take out quite a few cards with my chaos orb. Mua-ha-ha.

posted on Apr, 20 2015 @ 01:53 PM
link
Husband cut his CCG teeth on MTG, but he moved on to Legend of the Five Rings and was a tourney caliber player with it for five or six years. He played Mantis Clan because he loves the underdog.

Despite having the mind for it, I never got into the CCG thing because I never got obsessive enough to want to build a deck and play the same thing over and over again enough to fine tune it and my reactions with it to the point where I would be competitive on the tourney scene.

I preferred to go and compete in the occasional Sealed Deck and did decently well at those. I just prefer the type of game where I can sit down and everyone plays the same thing or near enough that I don't have to spend the bulk of my life preparing for it. I don't enjoy the prep phase that much just so I can match wits.
edit on 20-4-2015 by ketsuko because: (no reason given)

posted on Apr, 20 2015 @ 02:03 PM
link
I haven't played Magic in years. I still have a large collection of cards though. Could probably sell for a pretty penny... It's a fun game but I stopped liking it, because keeping up with the expansions is annoying. Nothing worse than dropping a hundred or two dollars into a collection only for a percentage of them to become obsolete when the next expansion came out. I hate Type II tournaments... I used to do Type 1.5.
edit on 20-4-2015 by Krazysh0t because: (no reason given)

You might be surprised. He recently pulled out our old rares binder, and looked through it to see what we could sell.

Unless a card is either a collector's item or part of a hot, flavor-of-the-month combo on the tourney scene, it won't be worth much.

The key to those sorts of sales is to sell in bulk, and my collection takes up a few plastic card boxes. But who knows right? You may be right in the end and I end up selling it for 50 bucks... In any case, it's just taking up space in my room.

Well as i play, and im pretty up to date with the current selling list etc.

i would happily take them off your hands

for a fair price of course

Maybe. Let me inventory them first. I got a bunch so it may take a while.

I'm currently only playing Standard and EDH. Mono Red is my go to for Standard...I know some people don't like it, but it is just so fun to burn face. I'll also play control decks, but never in a large tournament because it is just too tiring. I currently have a Blue/Green control deck that is fun to play.