He claims he committed 37 assassinations for the American government between 1959 and 1972, including the actress and model, Marilyn Monroe.

I feel death bed confessions like this have to be taken seriously. It could just be an old senile guy, but I think anyone who has a conscience or any sense of morality would want to get their dirty deeds off their chest before they meet their maker. Many elderly when facing death, will turn to the bible, or try to clear their conscience of anything that is weighing heavy on their chest. This guy could be doing just that. Is it just me, or does that article have literally no sources??

Even the picture is fake.
www.theguardian.com...
edit on 19-4-2015 by TheBlackTiger because: (no reason given)

posted on Apr, 19 2015 @ 06:10 PM
link
The possibility of such a claim on a death bed being that of a senile old man, is exactly why the CIA knows its secrets will be safe.


Wheres the any doubt, theres deniability.

The FBI has taken him into custody following this confession, according to the article. It would seem this is the real deal.

I am not surprised... secrets come out sooner or later!

I haven't looked, but I suspect this thread has already been done. This story came out a few days ago and ATS members are nothing if not quick to get the latest dirt posted. However, I did want to say something quickly about your belief in death bed confessions.

I was receiving a briefing from a prosecutor in New York one time when I was a cadet at West Point, and he was relaying a story about attempting to get a death bed confession from a man whose wife had shot him. The doctors had told him that the wound was fatal, and that he wouldn't survive long. And so, they got the mad to admit that it was his wife, only for the doctors to come in and admit they were wrong. Turned out the wound was not fatal and that he would be fine, at which time he quickly recanted.

I mention it because I remember that prosecutor explaining to us the power of getting information from a person when they know they're going to die. It's considered HIGHLY reliable and very strong in court, because when faced with death, most people will abandon lies. Priorities are quickly shifted when facing eternity. So though this man may simply be delusional (who really knows), the fact that he is going to die soon does, in deed, lend credence to his tale. Peace...

FBI - anthrax was a lie
CIA - we kill famous people (and blame others)
NSA - we spy on Americans
DHS - I'm not molesting you, I am just making sure you are not a terrorist.

Are you starting to see the enemy here people?

Does the picture look familiar? The man is actually Michael Tyrrell from a Guardian story, not CIA agent Normand Hodges.

Besides, the origin site is very suspect.
edit on 19-4-2015 by SkepticOverlord because: (no reason given)

Thanks, should be in hoax bin before long!

Better yet, click on the "reporter's" name and read the blurb... heh.

Until this is confirmed by some real source, it's a hoax.

Not that this isn't a likely scenario... buuuuut...

FBI - anthrax was a lie
CIA - we kill famous people (and blame others)
NSA - we spy on Americans
DHS - I'm not molesting you, I am just making sure you are not a terrorist.

Are you starting to see the enemy here people?

So you (and those who star your post) completely ignore the fact that this story is completely fake, with no sources, and with photos of someone completely different, from a UK article from 2013...

What is wrong with you people that you will willfully ignore actual reality in favor of believing your own government is evil and conspiring against you every damn day? You have the evidence right here, pointed out for you, and you STILL ignore it and choose to believe the BS.

It's so pathetic it's beyond belief, this is a great example of why conspiracy theorists get such a bad rap. Stop believing every BS blogger that comes your way, especially when REALITY is pointed out to you.
edit on 19-4-2015 by Rocker2013 because: (no reason given)

I'm just curious what method you use to discover fake graphics like that? You seemed to discover that so quickly and I'm not clear how to go about that. I understand there's always the chance of recalling the photo from elsewhere, but if that's the case in this posting, that's one hell of a memory.

Thanks for any replies.
edit on 19-4-2015 by gottaknow because: Fixed incorrect last line.

I've been waiting a couple of hours for this to be posted, the original article is from here worldnewsdailyreport.com... .. a satire news site, looks like another site fell for it!
edit on 19/4/15 by woogleuk because: (no reason given)

originally posted by: gottaknow
I'm just curious what method you use to discover fake graphics like that? You seemed to discover that so quickly and I'm not clear how to go about that. I understand there's always the chance of recalling the photo from elsewhere, but if that's the case in this posting, that's one hell of a memory. 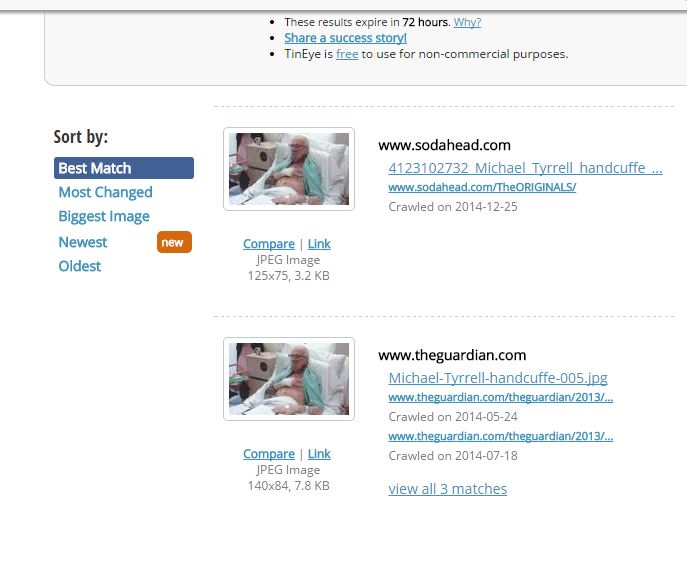 Thank you! I had no idea such a resource existed but I suspected due to the way that fake was found so quickly.