posted on Apr, 17 2015 @ 09:06 PM
link
I just wanted to share this amazing photo of forty dogs on a log! The picture was taken as a fundraiser to raise awareness for the plight of pets involved during domestic disputes.

I experienced the mental torture of escaping from such a situation but being unable to take my pets with me to the shelter, just my kids. I was extremely fortunate that some loving people kept a critical eye on my pets and would have stepped in if they were neglected or worse. Others are not so lucky.

The picture was taken near where I live (not that that matters. It's local news but I thought it worth sharing beyond) 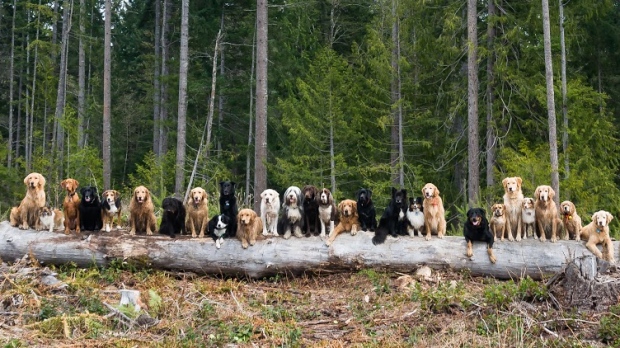 Sorry here's the link to the article.

posted on Apr, 17 2015 @ 10:40 PM
link
That's an amazing photo! I have lost so many good shots because the dog (single, just one dog) would not stay still long enough without turning his head or some such. To see this many pups all lined up and facing forward, well it truly is exceptional. I just love it!

I hope she does go through with submitting it to Guiness. And she is right to call it phodography, lol, because it most certainly is. I can see wallpaper, calendars etc. coming from this because is that not totally cute or what?
edit on 17-4-2015 by aboutface because: (no reason given)

The other 13 dogs can't be seen because they're in the background sniffing the other dogs' butts.

originally posted by: CranialSponge
a reply to: Bilk22

The other 13 dogs can't be seen because they're in the background sniffing the other dogs' butts.

LOL Thanks. I needed that laugh
edit on 24857Fridayk22 by Bilk22 because: (no reason given)

Thanks to bilk22 I had to go back and count but it didn't take away from the adorable factor at all!