The Saudi-led bombing is opposed by Iran, which is accused of backing the Yemeni rebels. The US, meanwhile, is helping the Saudi campaign - while also seeking to strike a compromise with Tehran over its nuclear program. Gayane Chichakyan reports on a complex tangle of interests in the region.

Could you call US and Iran allies?

I think that this is a psychological trick by US? Give Israel and Saudi Arabia the cold shoulder in hopes that Saudi Arabia will give Israel airspace and refueling in order to attack Iran?

I don't count either of these two treacherous countries as our allies in any case. Once we move from oil into other sources of power Saudi can go rot and I only see a benefit for Israel claiming this country as an ally because of its agents sitting in our parliament, but what exactly is the benefit to the british tax payer? Good riddance both of ya.

Tell that to the U.S. government

Saudi arabia could behead the presidents children on the White house lawn and your president and congress would just stand there and clap while gushing over how great allies they are.
edit on 17-4-2015 by crazyewok because: (no reason given)

Well we the people considered the Saudis our enemy not the government.

Yup, the Saudi royals even consider the Bush clan part of their extended family.

It's a complex issue, but I do see the strategic value of making deals with the most stable countries in the region even if they don't like one another. At least while the menace that is ISIS continues their campaign of death.

originally posted by: Osiris1953
a reply to: crazyewok

Yup, the Saudi royals even consider the Bush clan part of their extended family.

It's a complex issue, but I do see the strategic value of making deals with the most stable countries in the region even if they don't like one another. At least while the menace that is ISIS continues their campaign of death.

End of the day the bush clan will whore themselves out to whoever can give them power and most importantly money.

posted on Apr, 17 2015 @ 04:08 PM
link
Iran would make a much more productive partner and ally than Israel. Ten fold. Iran has WAY more pull and respect in the region.

Mark my words. Iran and the US ally and mutual respect shown, there will finally be peace in the middle east.

Israel can take a hike, or better yet the west stops financing them and let nature take it's course. Sorry Israel but not me or anyone I know would EVER buy a Israeli bonds. Nobody trusts you for obvious reasons.

Well I can't disagree. Ready to have another Bush in the White House?

posted on Apr, 17 2015 @ 04:15 PM
link
I find it strange that the Axis of Evil is Iran, Syria and (whomever the boogyman is today. NK?). But allies like SA, Israel and Pakistan are A-OK. 2 of those allies are directly responsible for 911 imo. The other is just dragging the US down with their inability to integrate into the region.
edit on 17-4-2015 by intrepid because: (no reason given)

Iran in Iraq and Syria against ISIS.

U.S. negotiating with Iran on nuclear weapons and sanctions.

in Daniel there is a passage which states..."the two kings resolved on evil will sit at the table and exchange lies"

I really think this prophetic utterance sums up the Iran-USA+Obama deal, which cannot-be-revealed but must remain Secret !
(...according to the administration itself)

Iran in Iraq and Syria against ISIS.

U.S. negotiating with Iran on nuclear weapons and sanctions.

How about good will and trade to all, no entangling alliances?

Let Israel,Syria, Saudi arabia and Iran tear themselves apart. West should stay clear and not take sides
edit on 17-4-2015 by crazyewok because: (no reason given)

Funny you said that because America invaded Afghanistan and Iraq. NOT Saudi Arabia! 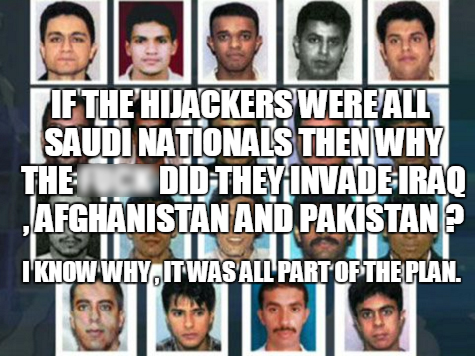 posted on Apr, 17 2015 @ 05:15 PM
link
Seems as though the west (Washington) will say what ever when ever for what ever reason at the time to continue it's pursuit of domination .Lets face it , Iran is a regional power that has been under economic sanctions for quite some time .Washington used Iraq to go to war against Iran and is running out of options as to what to do .

SA is going to be a regional proxy of some sorts and I think that is what we are seeing in Yemen .The shear hypocrisy in political terms boggles the mind .Russia/Iran keep looking like they have the moral high ground while US/Israel keep looking worse every day .and in every way ...

Funny how eleven of these nineteen hijackers were alive and well shortly after 9/11.