posted on Apr, 16 2015 @ 05:45 PM
link
I found this quite hopeful and since the new topics over the last week have been largely 'juvenile drivel', I thought I'd add some drivel of my own. But it's isn't hateful and is actually quite hopeful.

It also reminds me and, I hope, you that you don't have to buy any 'party line' hook, line and sinker. You can acknowledge the 'respected opposition's' wins rather then decrying all they do as rot.

James Webb, a 51-year-old YouTube celebrity who devotes his “Hot Lead” channel to topics like his love of guns and ranting about gay men kissing on The Walking Dead, may have shocked his viewers on Monday when he revealed that he was torn over which party to vote for in the 2016 election.

“And I’m serious because I asked myself, ‘Which party has helped me out the most in the last, I don’t know, 15 years, 20?’ And it was the Democrat [SIC] Party,” Webb lamented.

He goes on to say:

“With Obamacare, I got to retire at age 50 because if it wasn’t for Obamacare, I would have had to work until I was 65 and get on Medicare because health insurance is expensive when you’ve got medical problems,” he continued.

Webb said that he hoped to lose some weight and get in shape by taking advantage of a gym membership that was covered by his health insurance.

Here is a man, looking out for his interests and not the interests of his chosen political dogma. Hey an open-minded righty. YooHoo!!


The comments are a hoot as well for SO many reasons.

So a REALLY overweight guy who relies on insurance to help him loose weight when he can easily do the same thing on his own WITHOUT insurance and WITHOUT government intrusion, is your premise of promoting Obamacare?

He retired at 50 how??? Obama care didn't have ANYTHING to do with retiring! This guy is just proud that because he is overweight he got on SSD! Nothing to do with Obama!

Seriously, this guy is a joke! He doesn't need insurance to exercise OR lose weight!

More propaganda to depend on the gubment!

And he's most likely getting Medicare like many on disability do.

originally posted by: xuenchen
a reply to: seeker1963

And he's most likely getting Medicare like many on disability do.

Yesterday I walked 12 blocks to get a case of beer! I got less than 2 blocks from my house coming back and had to sit down. So should I rely on insurance so that I can join a damn gym or just get off my lazy ass and walk more?

You and I both know the answer to that question! Personal responsibility! No need to cry for the government or insurance coverage, when the simple answer is to just get off your lazy ass and do some exercise!

originally posted by: xuenchen
a reply to: seeker1963

“But you know, the Republican Party, they haven’t done nothing for me, man. Nothing,” he remarked. “So, I’m leaning toward voting for Hillary unless something major comes up. I don’t trust the Republicans anymore because they’re wanting to repeal the Obamacare. And I don’t want them to do that, man, because then I’ll have to go to work again. My life’s already planned out.” 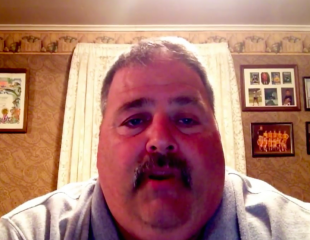 The proof is in the pudding.

Where would we all be if all of us decided to be like him? If we all of us retired tomorrow and decided to live off of government cheese.

I believe the phrase is "Going Gault."

The country would capsize and go under because no one would produce the things we'd all be relying on Obama (or Hillary) to give us out of their magic stash which apparently just magically generates itself out of thin air.

originally posted by: ketsuko
In other words, he has decided that he likes living off the rest of us who are all still working.

Where would we all be if all of us decided to be like him? If we all of us retired tomorrow and decided to live off of government cheese.

I believe the phrase is "Going Gault."

The country would capsize and go under because no one would produce the things we'd all be relying on Obama (or Hillary) to give us out of their magic stash which apparently just magically generates itself out of thin air.


I know a guy like this one the OP is praising!

He is on total disability because he "was" extremely overweight! Now he is not only collecting full disability payments, but he is also working for cash under the table! He has his own home, property, eats like a king, goes out and drinks, shoots pool, and live the good red neck life!

The guy is a total scammer!

"What has the government done for me"

What political party has done the most for me.

Which political party is responsible for raising my taxes?
Both.

Which political party is responsible for wars?
Both.

Which political party has now made it mandatory for me to buy insurance?
Democrats.

Where in the blue bloody hell is it written that government has to take CARE OF YOU?

This ####ing nanny-state mentality is a sign of weakness of values, morals, drive, ambition, independence, individuality.

What fat-boy doesn't get that while he can retire at 50, he'll die at 55 because Obamacare will just give him a pill instead of surgery to give him a longer life.

What a pathetic reason to celebrate.

posted on Apr, 16 2015 @ 07:59 PM
link
The social economic programs all seem to be simply maintaining poverty.

The failures since the 1930s are evidence.

posted on Apr, 16 2015 @ 08:25 PM
link
The modern equivalent to nero playing the lyre while rome burned ..... failed.. outdated.. political systems are not going to magically start working ... the games rigged and NOT in the peoples favour ... really .. how long is it going to take people to realise that .. rather than blindly continuing to play the game .. your politicians dont give a damn about you .. meh.. carry on ...