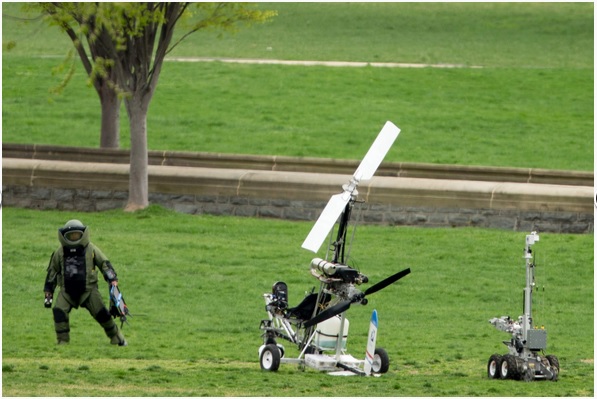 Woah gutsy move this guy not but thirty minutes drive from me just pulled off today. Says he talked about it on facebook a little bits ago and had a visit from the Secret Service and everything. Everyone thought he would back down. Some of us still got a pair I see . The first of many sacrifices are being made now. What can the rest of us do to shine light into the darkness that has shadowed the halls of our once proud Capitol . What is it going to take to beg our elected leaders for mercy and a return to reason of good governance, and not blind profits.

Hughes was arrested after he landed his single-person aircraft on the grass in front of the Capitol building at about 1:30 p.m., shocking tourists and prompting a brief lockdown of the Capitol Visitor Center. He wrote on his website that he was there to deliver letters to all 535 members of Congress and draw attention to what he said was campaign finance corruption.

He also wrote that the gyrocopter stunt was “a non-violent demonstration’’ designed to draw attention to his complaint that campaign finance laws have allowed the rich and powerful to control Congress.

“The demonstration is about restoring democracy,’’ Hughes wrote. “Corruption in Washington DC has robbed the US citizens of the representative government that is our birthright.’’

Hughes has been talking about staging a big protest for years, Shanahan said.

Shanahan was dead set against it.

“I told him it was not a good idea, that they are going to kill you. I told him if he wanted to use the copter, he should drop leaflets around Tampa.”

Secret Service agents interviewed both Hughes and Shanahan about a year ago after one of Hughes’ brothers told the agency about his plan, but nothing came of the interviews, Shanahan said. Hughes also had previously posted on his Facebook page that the Secret Service and a Hillsborough sheriff’s deputy showed up at his house one night to question him about his planned act of civil disobedience.

This man will find my financial support for legal costs, regardless of how little I can offer. Hopefully he will only need help if they try and railroad his ass. The guy has to get at least probation since there was no mal intent, it was still an airspace and safety violation thing I am certain.
edit on 4/16/2015 by DYepes because: and I forgot to source it
edit on 4/16/2015 by DYepes because: illustration