Chris Christie: 'I Will Crack Down And Not Permit' Legal Marijuana As President 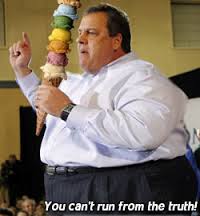 He needs to "Crack Down" on the Big Macs and Quarter Pounders with cheese.

Ruining peoples lives via harsh laws and fines, then persecuting them after sentence completion and permanent records available to employers, indirectly barring them from employment, while allowing violence inducing, people killing alcohol is complete and utter BS.

It forces people to do illegal things just to eat and live. But, they already know this.

It needs to stop now.

No, he's really burnt his blunt. He won't be president. Americans have moved on and progressed, more are advancing every day. Rand Paul is not completely right. It's not just incarceration that's the problem. The massive fines and loss of personal property and estate is also a very wrong. It just needs to be legal. Quit puddyfooting around and do it.
edit on 15-4-2015 by StoutBroux because: (no reason given)

He is a putz, New Jersey can keep him.

Aren't republicans supposed to support the concept of state rights?

posted on Apr, 15 2015 @ 08:57 PM
link
To be more serious, I think that's what happened is that Christie knew he was going to be president. On a site like this you can even say that he was looking along a timeline where he was elected president, and he loved the idea, and for a long time thought it was the timeline he was on. Turns out he wasn't. Ain't gonna happen. Things fell in on him, one after the other. Some of those he brought about himself. Others were situations composed of circumstance and/or coincidence involving people he knew and those he didn't. Now he's not going to be president. But he wants to give it a try, couldn't hurt and he'll enjoy a lot of it. He just has to prove to himself which universe he's in now, but he knows deep down that he won't be the guy (or gal) sitting in the oval on a daily basis in 2017.

He doesn't like marijuana, that's obvious. Why? Who knows. Could be any of a thousand reasons. He's been consistent on that. He dislikes people who use marijuana. Maybe be hasn't met the right ones. Maybe he had a single traumatic emotional experience (jilted in high school? all candidates should go public on being jilted in high school, if not before) which involved someone who smoked marijuana. In any case, by taking this stand he'll "force" all the other presidential candidates to make clearer statements on this. Which way the GOP goes on this depends on how much they want legalization their new gay. On this one, though, they've waited too long to put it on that level, and so have lost the chance of their side making much sense. Why did they miss it? Because lots of Republicans, in office, in staffing positions, in office workers, and in their base, enjoy marijuana. Christie likely knows that, but hopes that the primaries give him enough of a profile (no pun intended) so he's at a level where he can sneak a win in a few primaries if, and only if, the other guys balance each other out in such a way that a dark horse - and Christie is the darkest of the dark horses who are considered by some to be serious candidates - finds an opening and lumbers across the goal line. He'd be crushed in the general, it would be a hard-core macho male against the first woman holding all the cards. He has to give it a chance though, just to prove to himself he gave it a chance.

originally posted by: cavtrooper7
The south would NEVER accept his Yankee butt.

I have seen it in person and there is more than enough to cover the South.

Trully, you can inspire fear...

posted on Apr, 15 2015 @ 09:13 PM
link
Rubio and Bush are also for continuing the war on drugs Its very possible that one of these 3 will be the candidate that will lose in the national election as this election in 2016 will be the mar ijuanna election, and the nation will be running to the polls on election day.

Then to Taco Bell after the break
edit on 15-4-2015 by LDragonFire because: (no reason given)

posted on Apr, 15 2015 @ 09:41 PM
link
In my opinion, this is Christy supporting his organized crime, good old boys club. That includes privatized prisons and the paved inroads from public schools. Take marijuana out of the equation and a lot of money is redirected away from the current Jersey PTB that Christy is owing to, and thinks will back him all the way to the White House!

originally posted by: Cuervo
a reply to: wasaka

Aren't republicans supposed to support the concept of state rights?

Amen to that, this guy just doesn't have a plan so he is like "ohh I'll be HARD ON DRUGS, yeah thats the ticket!".

If New Jersey Gov. Chris Christie (R) becomes president of the United States, he said on "The Hugh Hewitt Show" Tuesday, he will "crack down" on those states that have ended prohibitions on marijuana.

When asked by Hewitt if he would enforce federal drug laws in those states that have legalized and regulated cannabis, Christie responded unequivocally.

"Absolutely," Christie said. "I will crack down and not permit it."

Citing an "enormous addiction problem" in the U.S., Christie, who has not yet announced a presidential run but has launched a political action committee, said that a very clear message needs to be sent "from the White House on down through federal law enforcement."

"States should not be permitted to sell it and profit" from legalizing marijuana, he said.

What a jerk, this guy.


I guarantee you he will not become President . no worries.. he is just taking Adelson's and Koch bros money..


Citing an "enormous addiction problem" in the U.S., Christie, who has not yet announced a presidential run but has launched a political action committee,

This from the same guy who's state relies on gambling to pay the bills and is a top advocate for legalized sports betting.

He has no room to speak about addiction problems, then again I have seen pictures of him it looks like he is very familiar with food addiction.
edit on 15-4-2015 by Grimpachi because: (no reason given)


I think it takes away your incentive to work and show up and do the things you should be doing.

That right there is likely among the top list as to why Corporate lobbyist don't want to legalize it after the pharmaceutical and alcohol industries. Nothing worst than a content consumer or worker not going after the bait.


Our prisons are full of non-violent criminals.


That is also among the top list and likely the end of Rand Paul. There is nothing better than a locked up consumer on somebody else’s dime. Lots of corporate money to be made with big prisons and expansions.

'Chris Christie: 'I Will Crack Down And Not Permit' Legal Marijuana As President'

And...the above statement is one of the reasons why he won't get the nomination.