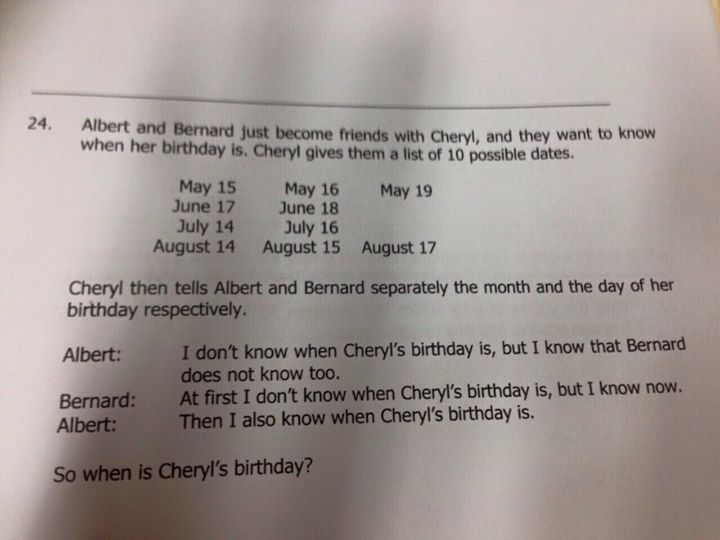 Yes this CAN be solved with just the information provided. I'll give you guys a hint after an hour or so if you are all still stuck. Have fun!

I saw this earlier and I was on the right track in solving it, but I went too fast and my answer was wrong. I feel good that I did figure out how to solve it. I should have checked my work, though...

It's an excellent brainteaser!
edit on 4/15/2015 by Benevolent Heretic because: (no reason given)

Is it just me or could there be an English lesson in here too...."At first I don't know when Cheryl's birthday is.." or is that part of the problem...wouldn't it be "didn't know".

haha yeah. It IS from Singapore. Didn't want to give that away so people wouldn't be tempted to just google the answer

Bonus Hint: 18 and 19 are the only two days not repeated

I have not used any mathematics to get this answer. I followed the contents of my abdomen. I wonder if I was right?

June 18th...but only guessed that cause someone said May 19th and was wrong. I don't see how they are deducing the month.


I think you have to assume that albert is a deduction wizard himself
edit on 15-4-2015 by rockpaperhammock because: (no reason given)

The reason is albert is deducing that if bernard knew it was the 18th or 19th it would be instantly solved...since there are no other competitors to those "days"...so albert figures out that it can't be in may or june because of that argument....so now how do we figure out the month...it has to be a day that doesn't repeat so I think that knocks off the July and August 14th...

thats where im at so far
edit on 15-4-2015 by rockpaperhammock because: (no reason given)


Ok i solved it...its july 16th...if they said august..it would give two possibilities....i just googled it and i swear the answer read exactly like i typed hahaha...i swear i found the answer on my own haha.

This problem actually sucks cause you have to assume bernard and albert are both deducing and deducing at the right time...its the order in which they deduce which helps you find the answer...the hardest part is figuring out when they are deducing.

Ouch! I was certain of June 17. Now, lunch is over and I have to go back to work.


originally posted by: rockpaperhammock
edit: haha ok wait i think i got it....its the opposite of what i just said...it cant be the 18th or 19th...thast why the other guy knows...im on the right track..give me a few

And i used to work with a Cheryl. her birthday was december 9th.

haha yeah. It IS from Singapore. Didn't want to give that away so people wouldn't be tempted to just google the answer

Bonus Hint: 18 and 19 are the only two days not repeated

Your hint gave it away ..I never would have got it without this post ...the 18 19th are critical for the start and then adding it June 17th helped as well!

Albert deduces that Bernard wasn't told May "19" or June "18" cause those would be instant answers as there are only one of them. This eliminates 2 dates. But it also eliminates the months as well because....Bernard states that he didn't know...and Albert states that he knows Bernard doesn't know...so if he didn't know for a 100% fact there is no way it could have been May or June cause that would leave the possibilities of 19 or 18 being said.

Yep, you got it! Great explanation too

Too bad US schools are more interested in teaching social engineering and what kids should think than in teaching kids how to think. This is a classic example of how to think that a child then applies to other subjects and life in general.