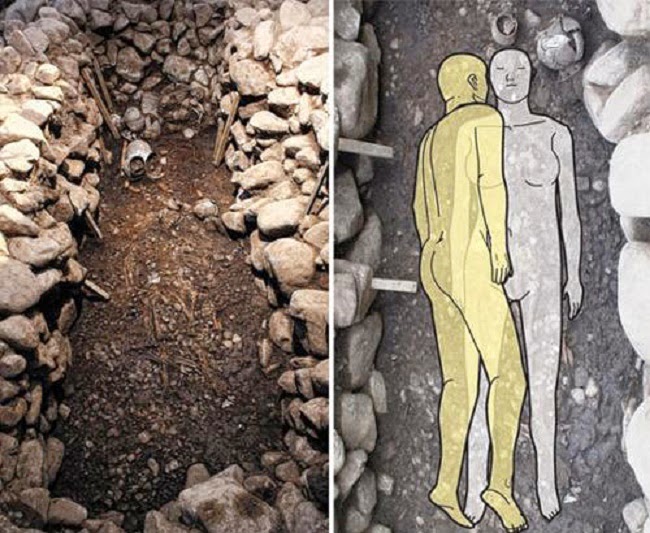 A 5th to 6th century tomb from Korea’s Silla Dynasty (57 B.C. to A.D. 935) was found in Gyeongju, North Gyeonsang, containing the remains of a woman and a male sacrifice found positioned next to each other [Credit: The Chosun Ilbo]


Burying the dead with a human sacrifice was a common custom in ancient Korea. But in a peculiar case, Korean archaeologists have uncovered a 5th- to 6th-century tomb from Korea’s Silla Dynasty (57 B.C. to A.D. 935) in which a young woman and man are buried together - lying next to each other - raising the possibility that it represents an image of two people making love.
Experts are fairly sure that the tomb was meant for the woman after her death. The man may have been killed to be buried with her. The Foundation of Silla Cultural Heritage Research announced yesterday that an archaeological exploration beginning last December found a late 5th-century to early 6th-century tomb made of soil and stone in Hwangnam-dong in Gyeongju, North Gyeongsang, which was the capital of Silla for almost 1,000 years. In the main chamber where the dead are buried, the remains of a woman and man, both in their 20s or 30s, were found.
Read more at: archaeologynewsnetwork.blogspot.jp...


Hmmm the article goes on to say it was not the first time a male sacrifice was found in a female tomb, sometimes guards were sacrificed as well but what was unusual is the position of the bodies, am wondering a very talented sex slave for the after life??
On another note not connected to the article, the Silla and Paekche dynasty were apparently founders of the imperial system in Japan.

posted on Apr, 14 2015 @ 09:09 AM
link
a reply to: Spider879
Thats very interesting spider,
i didnt know that the koreans were practicing human sacrifice that late.

originally posted by: punkinworks10
a reply to: Spider879
Thats very interesting spider,
i didnt know that the koreans were practicing human sacrifice that late.


Yeah that's relatively recent indeed but Buddhist influence may not had made or only made limited impact on the upper classes at the time.