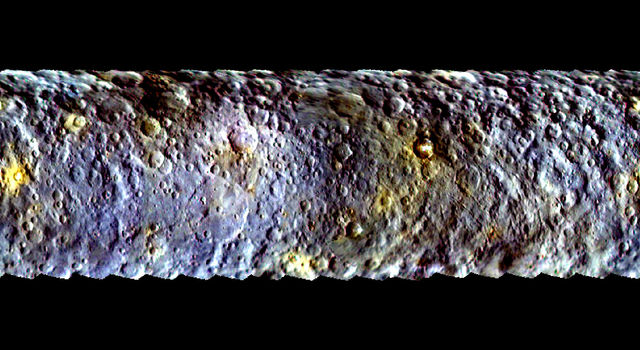 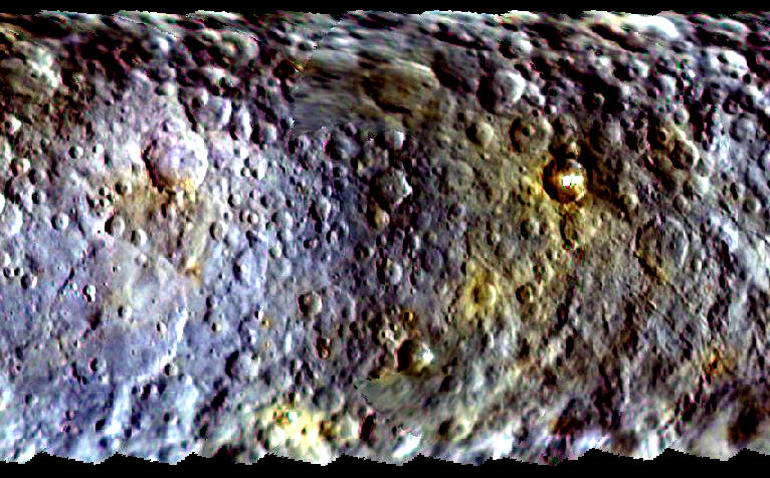 Exciting stuff! I bet those bright spots are going to be really bright!!!!

Dawn's earliest views of Ceres were in black and white, showing us a rocky, pockmarked body. Some unusual bright spots showed in these images, giving scientists plenty to ponder as Dawn moved closer to its goal. Researchers shared Dawn's first color map of Ceres, a fascinating enhanced-color image designed to highlight a variety of surface features.

"This dwarf planet was not just an inert rock throughout its history. It was active, with processes that resulted in different materials in different regions. We are beginning to capture that diversity in our color images," said Chris Russell, Dawn mission principal investigator.

Scientists believe Ceres is composed of 25 percent water ice by mass. Its most noticeable features are the many craters across the surface. The color map is one tool researchers are using to sleuth out Dawn's history and how impact craters affect the makeup of the surface. The investigation is still in the early stages.

Ceres' bright spots still remain shrouded in mystery, but answers may soon be forthcoming as Dawn enters a new phase in its study of the dwarf planet starting on April 23. It will be within just 8,400 miles of the surface at that time. This will provide scientists with a set of higher-resolution images to work with.

"The bright spots continue to fascinate the science team, but we will have to wait until we get closer and are able to resolve them before we can determine their source," said Russell.

oh man... my deepest wishes are for those bright spots to be from an Aliens origins, but i'm a rational man, so...

originally posted by: game over man


Exciting stuff! I bet those bright spots are going to be really bright!!!!

A..greed, as bright as gold!

As Carol Raymond Deputy Principal Investigator said, "the brightness is off the clock!" while Chris Russell, Dawn mission principal investigator, is more subdued saying, "Intrigued"
edit on 13-4-2015 by smurfy because: Text.

Too bad it's just one main picture, and it's color enhanced. On the positive side it's comforting that we will get images of the bright spots as promised.

Dawn in Excellent Shape One Month After Ceres Arrival


The next optical navigation images of Ceres will be taken on April 10 and April 14, and are expected to be available online after initial analysis by the science team. In the first of these, the dwarf planet will appear as a thin crescent, much like the images taken on March 1, but with about 1.5 times higher resolution. The April 14 images will reveal a slightly larger crescent in even greater detail. Once Dawn settles into the first science orbit on April 23, the spacecraft will begin the intensive prime science campaign.

By early May, images will improve our view of the entire surface, including the mysterious bright spots that have captured the imaginations of scientists and space enthusiasts alike. What these reflections of sunlight represent is still unknown, but closer views should help determine their nature. The regions containing the bright spots will likely not be in view for the April 10 images; it is not yet certain whether they will be in view for the April 14 set.

On May 9, Dawn will complete its first Ceres science phase and begin to spiral down to a lower orbit to observe Ceres from a closer vantage point.

As a clarification, it should be nothed that this isn't the new image taken recently. That color image is a color-processed version of old images, taken over the past couple of months:

This map-projected view of Ceres was created from images taken by NASA's Dawn spacecraft during its initial approach to the dwarf planet, prior to being captured into orbit in March 2015.

Ceres will not yet appear fully-lit to Ceres from it's vantage point. That wont be for a few weeks yet. For the imaging opportunistic that just past (April 10) and the one coming up(April 14), Ceres will only appear to be a thin crescent; the entire lit surface would not yet be visible to the Dawn spacecraft.

Thank you for the clarification and participation, I appreciate it!

Still excited for the pictures... Seemed like a new update from Nasa JPL, as I happened to be randomly visiting their website today and came across this in their News section.

Also finally figured out how to embed images! woohoo!

So hopefully late April, mid May, we might get to know what those shining spots are?

I've been waiting. I really hope it's something exciting and completely new to us. I'm afraid however, chances are it's going to be something kind of boring like ice or gas.

posted on Apr, 14 2015 @ 10:02 AM
link
Just ice or gas? Maybe. But just maybe not.
The temperature of the much-discussed bright spot checks out the same as its darker surroundings. How did that happen?
Light colored surfaces reflect away more solar energy than darker ones. This makes them cooler. So what makes the bright spot defy this basic observation of physics? NASA was reportedly surprised by this finding. It doesn't have an answer.
Is the bright spot getting extra heat to offset it natural, relative coolness? What could that heat source be?
They know they can detect the expected coolness of light colored areas on Ceres. They tried it on another, smaller,dimmer light colored area. They found it cooler than the dark material around it, as expected.
edit on 14-4-2015 by Ross 54 because: improved paragraph structure

Light colored surfaces reflect away more solar energy than darker ones. This makes them cooler. So what makes the bright spot defy this basic observation of physics? NASA was reportedly surprised by this finding. It doesn't have an answer.

The infrared photos can be seen here

I suppose its in the nature of the process, which if I'm not mistaken, is a process of identifying temperature differences of materials, solids, matter. Its not designed to work with "Things" that do not have a temperature signature. It appears, this light has no signature, therefore, it is not a solid material thing.

originally posted by: game over man
a reply to: vArchon

Oh well, we're all glad an expert like yourself with the space agency you own clarifies that for us.

posted on Apr, 15 2015 @ 01:21 PM
link
a reply to: All Seeing Eye
The pair of bright spots (area 5) do have a thermal signature. It's just that it is, against expectations, the same as that of its darker surroundings. So, maybe they missed the cooler temperatures because the bright spot is so small that the signal from the warmer, surrounding terrain overwhelmed it? Could be, of course, but this is far from a settled question.
In the visual and thermal images, the relative sizes of the area 1 and area 5 bright spots is not consistent. The area one spot is missing from one part of the visual range, while the area 5 spot is plain to see. Even in the part of the visual range where both can be seen, the size of the area 1 spot is unclear. It's diffuse, and hard to separate from its surroundings. It might be half again as large as the area 5 spot, it might even be the smaller of the two.
In any case, the area 1 spot appears much dimmer, and much more similar in color to its surroundings than is the area 5 spot. These would minimize the area 1 temperature differences, yet they were detected.
The point of all this is-- It may not be so likely that the coolness of the area 5 spot was simply missed. Perhaps it could have been see, if it were present. There may be an anomalous source of heat in area 5, that has yet to be explained.

What’s lighting up the cold, dead tiny planet of Ceres? The Dawn has gotten a recent closeup of the weird bright spots on the surface of the planet but no one knows exactly what’s causing them. Experts’ best guess is that they are reflections of ice from inside deep caverns,

Now we are getting somewhere, they are now seeing a deep cavern.


I wonder why they reversed the usual order of colours. Here's my edit of the image, where I have put the colours in their respective order by wavelength:

My guess is that the reddish colouration is old, space-weathered surface, while the blue-green areas is material freshly-exposed by impacts.

originally posted by: MysterX
a reply to: Soylent Green Is People


So would I and many many other people. The most recent "Dawn Glimpses Ceres' North Pole" GIF file is here.
www.jpl.nasa.gov...

But I'm afraid the feature 5 is not there. The GIF file only seems to cover 1/4 of the rotation. So I guess we are going to have to wait.

Let's talk about the colours in this image, what do you think they represent?