Category force storms are on the increase!

Once again we are enticed into believing so by the figures where the force of the storm is quoted for the duration of the storm. The chart below shows the storms from December 2011 to now charted by quoted duration.

The comparison chart above shows the Category force storms as they are reported for the duration of the storm as in the top chart. This generally includes the lead in period as the storm builds and the lead out as it decreases to tropical storm or lower force, i.e. under category force.

If we look at a storm such as ITA (back in April 2014 - because I happen to have that comparison) we can see that the storm duration was reported as from 04 April to 14 April. 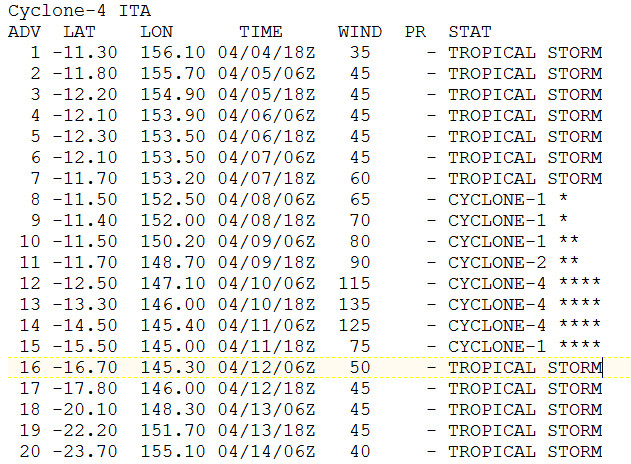 The comparison gives one a better idea than using just the duration since ITA was 11 days duration, but was only Category 4 on 2 of those days.

Looking again at the Dec 2011 to Apr 2015 comparison you can see that whilst the reported durations have increased the actual days at category force have not, or have only so slightly as to be almost imperceptible.

In my opinion there has been no increase over the past 3+ years in the category force storms. The quoted ITA example is but one where that which is reported belies the facts.

I am not saying that there is a deliberate attempt to mislead. Scientists would not do that would they?

posted on Apr, 12 2015 @ 08:37 AM
link
Depends on how they arrive at a measure of force. When the cyclone you charted reduces to a category 1 at the end it still gets "four stars". What goes into that determination?

Is there a link to their formula for that?

It got four stars (an illustrative value representing force 4) because ON THE DAY, in this case the 11th April, the maximum logged category force was 4 at 0600 Zulu thus I count it as force 4 for the whole day regardless of whether it drops lower than that during the duration of that day.

So then these are your charts?

It got four stars (an illustrative value representing force 4) because ON THE DAY, in this case the 11th April, the maximum logged category force was 4 at 0600 Zulu thus I count it as force 4 for the whole day regardless of whether it drops lower than that during the duration of that day.


Isn't that sort of cheating though? If the storm is a category 1 its a category 1, regardless of what day. You gave it extra stars…

The point is this: It is not cheating at all because during the day it was Force 4. Remember that the 'official' version is that it is Force 4 even when it is just a tropical storm.

If I was calling it force 1 when it was force 4 that would be cheating, but I am not. I am saying that because it was force 4 during some part of the day it is called force 4 for that day.

If the day was split into quarters then the storm would have been force 4 in the first quarter (or half) and then force 1 for the remainder. That would in fact mean that the incidence of category force would be even smaller than I am currently allowing for.

ETA: I should have given you the links for the data from which I created the charts

The home page, West pacific as an example on which is MAYSAK tracking data which are the types of figure I use above. On this one you can see that although called a Super Typhoon 5 for the period 27 MAR-05 APR 2015 it was on such on 2 days:

Thanks for the links.

So then climate change, then… for the last three years.

As always PM, nice job on the data collecting.

So if I'm reading this correctly, what you're saying is: "Hyperbole is as hyperbole does." ?

I equate this sort of thing as the same type of hyperbolic soapbox claims such as this new fad of now giving common winter storms names like "Diana" and "Andy"... It serves of purpose giving the illusion that these common annual storms are suddenly far more wicked and terrifying than they've ever been before in human history.