ACC Vice Commander fired and reprimanded over A-10 comments

posted on Apr, 10 2015 @ 04:10 PM
link
The commander of Air Combat Command (ACC), General Hawk Carlile has issued a letter of reprimand, and removed Major General James Post from his position as ACC Vice Commander after an Inspector General investigation.

The IG launched an investigation after a military blog reported about comments Post made at a Tactics Review Board at Nellis AFB in January. Post told 300 airmen that any of them that advocated to Congress that the A-10 be kept in service would be committing treason.

Post has said his comments were meant to focus them on working within the Commands restraints, not discourage them from speaking to representatives.

There's no word on what his next assignment, if any will be.

Especially when a military commander is speaking to subordinates when he uses it.

I can't believe the AF having no confidence in the platform AND deploying them to a hotspot.

They have confidence in it, they just have wanted to get rid of it for decades. It's not sexy enough.

I honestly couldn't think of a better platform to have in theater if a bunch of tanks started rolling up. Then again, now there's things like the CBU-97 (is it deployed? Does it work?), you can 'project' a little better without putting air crews at risk.

Since it's a CAS platform, is there an Air Force/Ground Troops difference to get past? I'm obviously not military, so I don't know.

I saw two of them fly over my house in central KY a few years ago very VERY low. It was the first time I've even seen them in flight. I don't care what anyone says, they're sexy aircraft.

B-52 stratofortress (long and swoopy):
upload.wikimedia.org...

It's basically an airframe built around a Gatling machine gun, with the aerodynamics designed for fast tight turns and close combat. The engine intakes pulling in air from above the wing increases the lift, thus reducing the need for large wings. The senior air people are used to seeing aircraft that are long range and designed for cruising. To make them happy, the engines would need to be built into the airframe, and the wings need to be swept back.

They shifted a bunch to the Guard, yes. The Guard and Reserves fly a number of high end platforms though, including the B-2.

The problem with the Warthog is that it went with a low tech approach to the mission. No night vision (they used to use the sensors on Maverick missiles), analog instruments, high mounted engines designed to take damage and function, lots of armor.

But it was also very very slow. To refuel with an early model KC-135 the tanker had to be nose down so the A-10 could keep up.

Put all that in an Air Force where all but a tiny number of officers that have reached CSAF have come up through fighters, and the last thing they want is a slow ugly platform that can't fight air to air. If there wasn't a desperate need for new tankers and bombers I doubt we'd be getting them.

A-10 Attack! was one of the first computer games I ever played. No instruction manual or anything. Somehow I managed (after many hours) to figure out what all the switches and buttons did so I could take off.

It's got to be a fairly basic airplane if even a 13 year old kid can figure out how to taxi and take off in a couple of hours!

I sat and fiddled with this for hours: 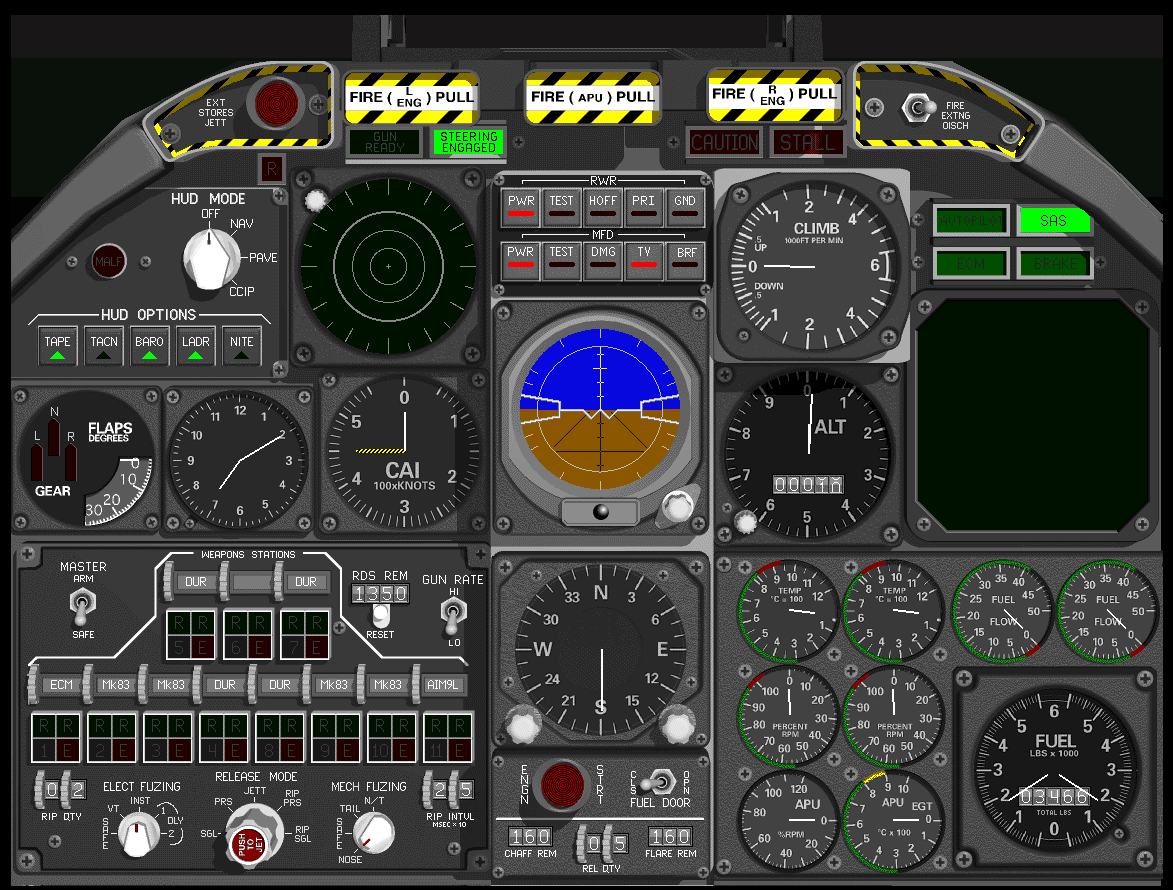 posted on Apr, 10 2015 @ 06:01 PM
link
Well someone who's really good at combatives once told me there are two types of men in this world. Gazelles and Warthogs .

Gazelles are your typical jock or sexy athlete. They look fantastic, they coast by on their looks. But when asked to accomplish the mission they often fail. Warthogs on the other hand are usually counter intuitive in their looks. They are often ugly, maybe ungainly but they succeed. They persevere. They get the job done. When given the choice over a weapon that looks sexy and a weapon that looks ugly I almost always choose ugly.

I believe this analogy holds over into just about most things in life A-10 included.

We had a similar in the UK - Cart Horse / Race Horse!

A-10 is quite versatile, it can loiter at around 15,000ft, it can upgrade pods but it carries a great optics pod which can be used for surveillance and target designation in its current state, it can take out attack helo with its guns and sidewinders, it can deploy a huge amount of ordnance to support troops and stop armoured columns.

With all this talk of bomb trucks and "force multipliers, once the fast and whizzy things have punched through this gives you a great asset between fast air and choppers.

Seems mad to me especially with the U.S. budgets.

Anyway on topic, why on earth would anyone say that, it's a threat to make people not have their own opinions. It's shows extreem arrogance and in my opinion is the weakest form of management.

If you cannot accept people have a different opinion and you are not able to rationally counter that opinion of others, you have to accept your opinion may not be the best one.

If the USAF have made a decision that is the best for the U.S. armed forces, then no matter that a large number of people don't like change or have reasons, the right decision should stand up. Of course when 60% of voters cannot see the decision is a right one because the love the Hog because it looks mean.....Houston we have a problem!
edit on 10 4 2015 by Forensick because: (no reason given)

So this boils down to "We ARE getting rid of this aircraft, and replacing it with something far less effective, and which will work out more expensive in the long run, and if ANYONE here tries to tell congress or any representative in government what they REALLY think about that, that person will be in hot water"

The A-10 is an awful lot like the lead character from Taken. It's older than everything else in the sandbox, and has a limited, but very specific skill set. It cannot make a cup of good coffee, synch its iTunes account, or understand wifi without using the instruction leaflet. But by God can it fill everything from one horizon to the other with bullets, take vast amounts of abuse, and do it all again in the morning, relentlessly.

Pretty much yes, to both of your points.

posted on Apr, 10 2015 @ 07:11 PM
link
Can't they do competitions with proposed prototypes to sort all this out? I mean if something is going to cost more and be less effective, can't they shut up and take their lumps?

Well see, this is what I do not understand worth a damn.

The US government spends a fantastic amount of money, astronomical sums, on defence. It purchases so much gear, and pays so much for it, that at times it borders on the ridiculous, and although there has been a trend in recent years of cutting this and that, the numbers of dollars expended are still absolutely insane.

What I cannot fathom, is that if one has a platform which performs its role effectively, has a proven track record, is loved by the people who operate it, and the people on the ground who rely upon the aegis it can throw up around them, why one would decide that any course of action other than flying that airframe until it literally disintegrates through age, is sensible! Surely this makes no sense?

Let's say that I have two implements on a table in front of me, with which I must achieve my personal defence. One of them, is a sleek, small combat knife of modern construction, with a compass built into one end, and a micro computer with a USB port that I can attach to my computer, to record stab forces, so that in my next encounter I can use the recorded data to improve my shanking action. The other is an old, weather beaten Bowie knife with a bone handle. Guess which one I will pick up in a heart beat? It will be the Bowie, because I already know that it is sharp, I can handle its extra weight, and know how to account for its slower speed of strike, the width of its blade, its balance.

For similar reasons, the A-10 ought to be protected from canning I think. If it can fly, then it can fight, and if it can fight, then it damned well ought to! I certainly think that getting rid of this Major General fellow was the right course of action here, since he had no business interfering in his subordinates ability to access representatives on the subject of the A-10s retirement.

Almost every CSAF ever came up through fighters. If thru didn't need tankers and large aircraft to move their fighters around, and bombers to destroy ground targets, I wouldn't be surprised if they would transition to an all fighter force.

the a-10 was born sexy! it's my favorite plane out of the whole air force, and that's something considering i had a man crush on the tomcat (i was a kid then )

tell you what, strip the weapons and offensive abilities off of those planes and send one to me.

The people in charge of buying should not have any bias at all, save for when it comes to making sure, that what the people on the ground need, and what the airforce need, is provided them. Second, they should be concerned that it is delivered as cheaply as possible without even the slightest compromise as to safety and performance.

Or to get back to the Bowie or the Newbie analogy, if the people for whom the buyers are buying are used to Bowie knives, then their personal preferences as buyers are not important. All that matters is putting what will get the job done, in the hands of those who are tasked with doing it.

Ultimately, it should be the people operating the CAS role, who decide what aircraft and equipment they get, not some dunce with an accounting degree and a vested interest!