posted on Apr, 8 2015 @ 04:14 PM
link
In light of today's guilty ruling of Dzhokhar Tsarnaev I wanted to get ATSs thoughts on a very peculiar piece of evidence in the case that makes zero sense to me. I don't want to get into all the conspiratorial aspects of the case (because there are many), but I just want to point at something that to me is a clear cut example of a blatant lie introduced as evidence.

To me this is a smoking gun that at the very least Andrew Kritenberg (the main witness to everything) is lying about a bullet going through his wall and into his chair. Below was part of Andrew Kritenbergs blog.

After shooting had stopped my roommate found a bullet hole that penetrated his west-facing wall and continued to pierce through his desk chair. His room is on the 2nd floor corner of the house, closest to the street, with west and south facing west. 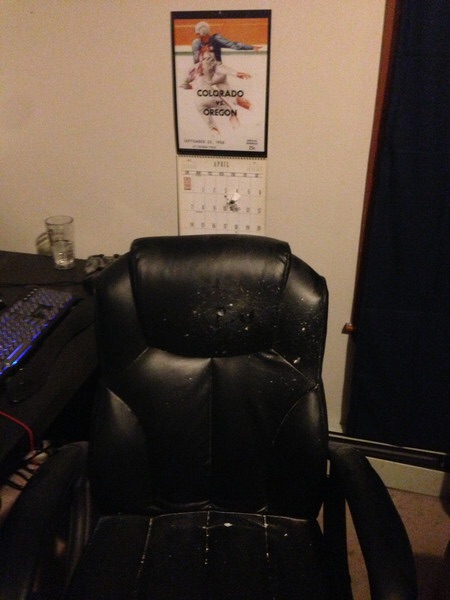 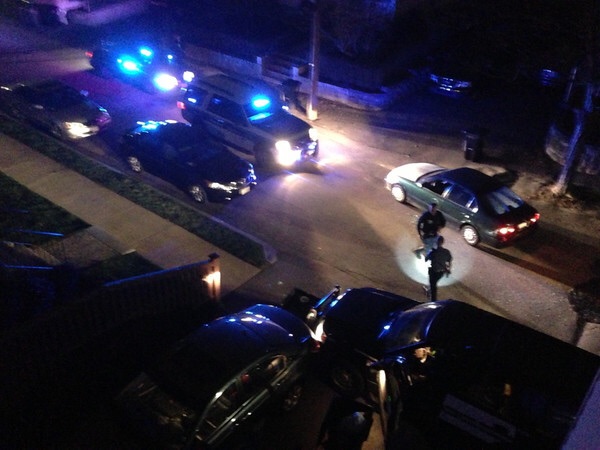 If you notice the hole in the wall, the hole in the chair, and then realizing the room was on the second floor, something doesn't make sense. The bullet exited the wall and went straight into the chair. For that to happen, the gun shot would have had to originated at that same level as the straight line entry holes. If the room was on the second floor, how did a bullet from the street enter his wall and go through his chair at a straight line?

posted on Apr, 8 2015 @ 04:21 PM
link
I would hazard a guess that the chair was pushed back against the wall at the time of the incident. From the picture you have posted, it looks like the hole could be slightly higher in the chair (perspective may just look that way though) and if the chair were rolled back, it would line up in a slightly upward manner.

These look more like straight lines than anything else. Meanwhile, the wall and chair are on the second story of house. That hole in wall would have an upward angle to it. But even so, the house would have been hit by police (because of location), do police have that bad of aim?

the police were about 100 yards down the street. Any physics guys here that could calculate the trajectory of a bullet entering the wall and at what angle it would penetrate from?

Edit to add: after looking at picture again, that is an absolute straight entry and exit hole. Very fishy.

AAC
edit on 8-4-2015 by AnAbsoluteCreation because: (no reason given)

Just putting this out there I am not insisting that this is the answer.


Bullet paths can regularly deflect off of a surface, I am not entirely sure of the placement of each individual. But ricochets occur all the time when material is put in the path of a bullet.

originally posted by: Greathouse
a reply to: AnAbsoluteCreation

Just putting this out there I am not insisting that this is the answer.


Bullet paths can regularly deflect off of a surface, I am not entirely sure of the placement of each individual. But ricochets occur all the time when material is put in the path of a bullet.


I considered that. But those holes look very clean. Almost close range clean. A ricochet, from 100 yards away, would not keep the velocity to penetrate the wall and chair so cleanly.

posted on Apr, 8 2015 @ 04:49 PM
link
After further analyzing of the photo, the chair level bullet hole matches the bullet hole in wall almost exactly when using he desk as a reference point. Both seem to be around 8-10 inches above the desktop.

This would prove that it was a straight line bullet, which would be I possible from ground level fire to second floor.


Edit to add: after looking at picture again, that is an absolute straight entry and exit hole. Very fishy.

They do look straight but I suspect a slight angle, say 2-4 degrees could look pretty flat in this shot. Other than that, I have no further theory to give.
Thanks for considering it.


ETA: If the officer was 100' from the home and shot upward and we assume the height of the hole in the wall was about 18' off the ground, that is a 10 degree angle. That you might see in a photo if the shot ran clean through. I do not know if that is an outside wall or if the bullet passed through an exterior wall to get to this one, another factor and one that could have deflected the shot a bit.
edit on 8-4-2015 by evc1shop because: Extra to add.

posted on Apr, 8 2015 @ 05:02 PM
link
Shouldn't there be an entry hole somewhere? Apart from the chair, the bullet came from somewhere below right? This info would be handy

Edit: I obviously don't know anything about ballistics, but common sense would say you'd need to trace the bullet from where it was fired, through to its final destination/landing point. Just saying
edit on 8/4/15 by OpenEars123 because: (no reason given)

That's where me not understanding the locations comes into play. Was that an interior wall or in exterior wall?

If it was an exterior wall was the outside made of brick, block, vinyl siding, or stucco?

And if the wall in the picture was a interior wall what was the original point of entry into the building?
edit on 8-4-2015 by Greathouse because: (no reason given)

I'm not sure why the exterior wall matters. The exit hole was clean. It's very obviously not a ricochet. Ricochets lose much of their velocity and these holes are both very clean.

After playing with the picture a bit, it's actually obvious that the hole in the wall is higher angled that hole in chair, by about 2-4 inches. It actually looks like someone on the other side of that wall fired a pistol at waist level on a slight downward angle and then entered the chair.

originally posted by: here4this
First question. Was the round recovered and of what caliber and type was it ?

Here is a picture of bullet couple claim went through their window panel and landed on their floor. 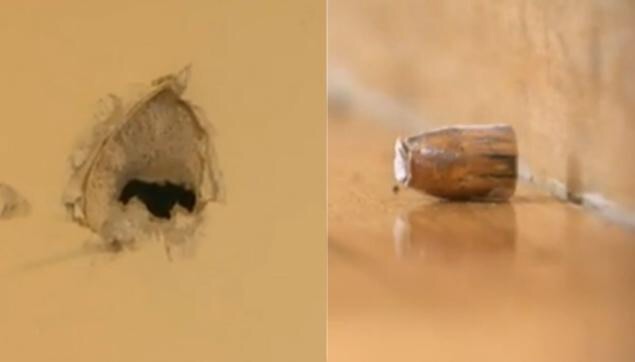 If you notice the hole in the wall, the hole in the chair, and then realizing the room was on the second floor, something doesn't make sense. The bullet exited the wall and went straight into the chair. For that to happen, the gun shot would have had to originated at that same level as the straight line entry holes. If the room was on the second floor, how did a bullet from the street enter his wall and go through his chair at a straight line?

Physics !!! There is no way of knowing prior to the event how a fast moving projectile would be deflected without intesnive knowledge of all the materials in the projectiles path. Not even the the biggest computer could tell. An approximation at best. The only thing you can be almost (!!) certain of is a continuation of forward momentum.

Is there a steel beam in the wall cavity, for example.

posted on Apr, 8 2015 @ 05:22 PM
link
There were sharp shooters posted on rooftops and perhaps in second storey windows If he is on the second floor and you insist it's a straight level shot, then one has to suppose it came from across the street, yes?

originally posted by: AnAbsoluteCreation
I don't want to get into all the conspiratorial aspects of the case (because there are many),


As there would be n any incident involving chaos.

Let me remind you of an incident in London a tube station where bombers blew up a tube station and prior to the bombing had travelled there by bus. Psychologists years after the event asked a simple question of a group of people : Can you describe the images of the bombers whilst they were travelling on the bus? They got many responses and descriptions.

No such video footage exists.

It's not physics as much as its logic. How did a bullet hit the second story, then pierce the wall and chair at what could be argued was a straight line?

I'm playing devils advocate here, but my instincts tell me that this is not possible from a street fired weapon.

So the suggestion here is that the bullet hole is faked?
And if it's faked, then surely whoever faked it would have done a better job, so as not to leave it open for random conspiracy theorists to pick apart on the Internet.

Really, I'm confused. If individuals and agencies are supposedly faking things all the time, they're doing a REALLY bad job of it, in instances where they don't even need to, and giving random people a lot to obsess needlessly over.

Bullets do drop over distance and the distance is determined by velocity, gravity, resistance and projectile mass. Trajectories can be calculated for ballistics and there are locations on the internet you can google. It is possible that the round reached it's peak altitude at the house wall, was slowed down enough passing through the wall but still had enough momentum to carry it fairly parallel to the floor, hit and pass through the chair and end up on the floor.

ETA: I don't think this bullet is the smoking gun. I look at the black backpack that the Craft Merc's were carrying, the picture of the blown up black backpack evidenced as the one holding the bomb and the Craft Merc running away WITHOUT the black backpack. The two brothers they liked for the bombing, neither had a black backpack, one was white and the other gray. The jurors or the defense for Tsarnev must be idiots because the colour of the backpack is pretty specific and its markings are telling in accordance with the videos and stills. I wonder if there was even a trial, a real one, not a made up one for public consumption?

posted on Apr, 8 2015 @ 05:39 PM
link
One possible explanation of the more level bullet path involves thinking ballistically. All "dead-flight" projectiles lose energy as they travel through the air. Also, they are affected by gravity. A projectile shot at a 45 degree angle will eventually hit the ground some distance away (following a curved ballistic path).

That said, the projectile could have been fired from the ground, at an upward angle, enough of a distance away to make its angle more shallow due to gravity. So, if the angle was just right (which is much more likely than some wild conspiracy involving hundreds of people) it could have entered the room at a much shallower angle than when it originally left the barrel of the gun. So, that could explain the shallow angle indicated by the two entry points in the photo.

I say yes to both.
edit on 4/8/2015 by Krakatoa because: fixed fat finger errors

posted on Apr, 8 2015 @ 05:39 PM
link
Was it stated anywhere that the round was fired from street level? Or simply that the round penetrated his wall and chair?

You go from saying that the holes are pretty much level to saying there is much as 4 inches of difference in the level of holes, and suggesting that somebody fired a handgun through the wall.

A difference of 4 inches can have an extreme impact on the angle of penetration depending on how far from the wall the chair was. Was it right next to the wall? That would mean an extreme downward angle. 3 feet away? Less so. 10 feet away? Even less so. Interior wall? Exterior? Materials used in the wall? What's behind the wall? Where was the original penetration of the wall?

There's a ton of variables missing here, which makes this next to impossible to call a "smoking gun" of anything.