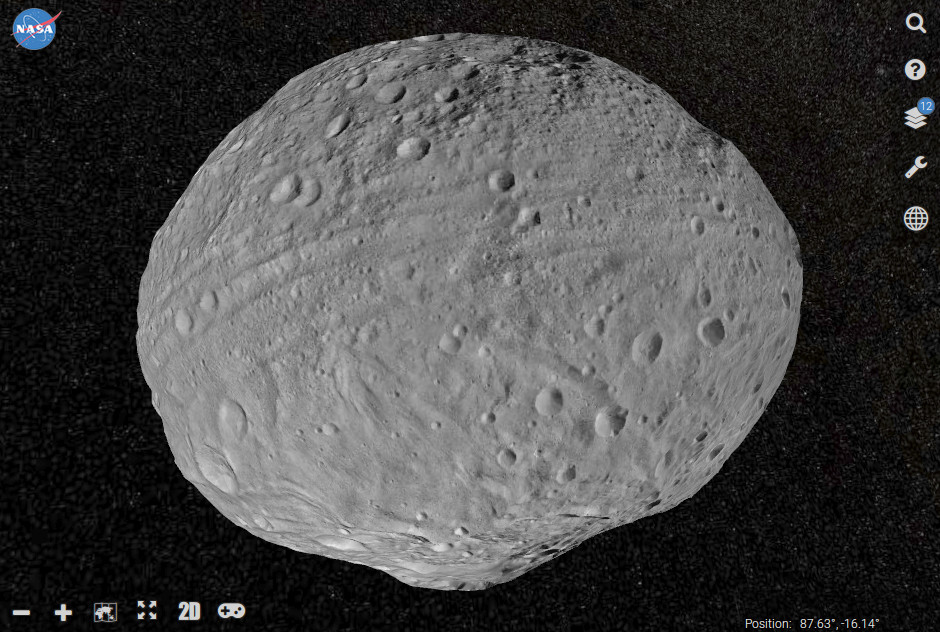 NASA has created a web-based application that will allow you to explore images of the asteroid Vesta taken by the Dawn spacecraft. Vesta was the first target of the Dawn spacecraft -- which is currently near Ceres, and will begin its detailed exploration of that dwarf planet in about a week. Prior to reaching Ceres, Dawn explored the asteroid Vesta between 2011 and 2012.

This app allows users to zoom in, fly around, and otherwise just explore Vesta in relative detail. You can even 3D-print some features of Vesta (if you had a 3D printer).

NASA has announced the release of Vesta Trek, a free, web-based application that provides detailed visualizations of Vesta, one of the largest asteroids in our solar system.

NASA's Dawn spacecraft studied Vesta from July 2011 to September 2012. Data gathered from multiple instruments aboard Dawn have been compiled into Vesta Trek's user-friendly set of tools, enabling citizen scientists and students to study the asteroid's features. The application includes:

-- Interactive maps with the ability to overlay a growing range of data sets including topography, mineralogy, abundance of elements and geology, as well as analysis tools for measuring the diameters, heights and depths of surface features and more.

-- Standard keyboard gaming controls to maneuver a first-person visualization of "flying" across the surface of the asteroid.

"There's nothing like seeing something with your own eyes, but these types of detailed data-visualizations are the next best thing," said Kristen Erickson, Director, Science Engagement and Partnerships at NASA Headquarters in Washington DC. "We're thrilled to release Vesta Trek to the citizen science community and the public, not only as a scientific tool, but as a portal to an immersive experience that, just by the nature of it, will allow a deeper understanding of Vesta and asteroids in general."


Below is a link to the Vesta Trek web app
Note: This link opens directly to a web-based app.