Amazon’s Dash Button Is Not a Hoax, It’s Phase One 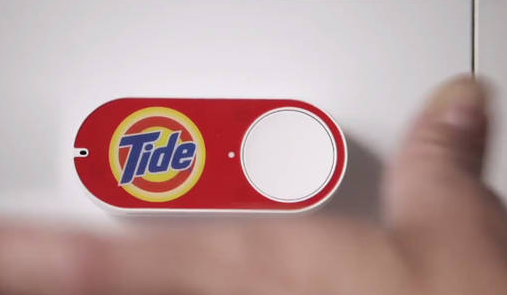 When I logged in the other night to drunkenly order nonsense I really thought this was an April fools joke. I'm still not entirely convinced it not.

So essentially you get a little button for a specific product, like laundry detergent. You push the button, and it orders the product for you.

I don't know how to feel about this. I think it's both incredibly stupid, and also genius. I will notice something is about to run out, completely forget to order it or pick it up at the store, and then keep forgetting until I have to make a specific trip. It also just seems pretty freaking lazy, and like succumbing to your own dumbassery. It also feels a bit creepy, having automatic buying of product.

Amazon introduced a product on Tuesday so crazy we thought that it was an early April Fools’ joke. It’s the Dash Button, a plastic single-function controller the size of a pack of gum. Each button bears a different brightly colored product logo. Push the button, and soon that product arrives at your door.

In the video that accompanied Amazon’s announcement, there are Dash Buttons for Gatorade, Kraft mac and cheese, Glad trash bags, Gillette razors, Cottonelle toilet paper, Clorox Wipes, Huggies diapers and Tide detergent, and about a dozen other brands are also now partnered with Amazon. The online retailer expects that you’ll place the buttons around your home—in your pantry, on your washing machine and even inside of your fridge.

What do you guys think? Would you use it?

You still have to manually approve the order.

It's certainly nothing to be concerned about. There are already options to get scheduled shipments of household items that run out periodically.
edit on 3/31/2015 by Answer because: (no reason given)

originally posted by: Answer
It just adds the product to your Amazon shopping cart via a smartphone app.

You still have to manually approve the order on your phone.

It's certainly nothing to be concerned about. There are already options to get scheduled shipments of household items that run out periodically.

Agreed... a mild convenience .. maybe an inconvenience if you have to charge it unless it's RFID and your phone powers it.. I haven't bothered to read much into it because it doesn't really interest me much..

I can SEE the usefulness of it .. if you're at the washing machine, you're a prime subscriber and you're low on your brand.. push the button.. great!

Genuinely though I hope we are capable of thought and are able to think ahead a bit.. I tend to know when I'm running short on anything I use regularly... I either order it before it's an issue during my lunch break, or I pick it up on my weekly run ... and we're not quite far enough to replace my weekly run.. I still need gas after all and the grocery is right next to the station...

I think this is a clever attempt by Amazon.. but I don't see the niche... unless you can have starbucks delivered to your desk in the hour .. hot..

posted on Mar, 31 2015 @ 10:13 PM
link
Come-on man...really?
It's actually a physical button to put in my fridge or nightstand or whatever that could get pushed by accident or by my kid?
How do I know how much pushing the button is going to cost me?

Seems like a ridiculous idea & I'm still not convinced it's not an April fools day joke.
edit on 31-3-2015 by coldkidc because: (no reason given)

originally posted by: coldkidc
Come-on man...really?
It's actually a physical button to put in my fridge or nightstand or whatever that could get pushed by accident or by my kid?
How do I know how much pushing the button is going to cost me?

How about some reading?

Once connected, a single press automatically places your order. Amazon sends an order alert to your phone, so it's easy to cancel if you change your mind. Unless you elect otherwise, Dash Button responds only to your first press until your order is delivered.

Anyway, it is a April fool's joke

originally posted by: coldkidc
a reply to: Expat888

Someone has to start the revolution .. my contribution to improving the world and sticking it to banks and authority .. I only deal in cash or trade havent used a bank in decades ..

posted on Mar, 31 2015 @ 10:25 PM
link
What the hell is that button you have in the basement Becky. We pressed it twenty times and we didn't see anything come on. I asked your kids (my grandkids) and they pressed it too and none of us could find out what it turns on.

posted on Mar, 31 2015 @ 10:30 PM
link
I add stuff to my amazon cart regularly- and occasionally log on and clean out stuff I've changed my mind on, and then process the order.

I do this because I'm too cheap for "prime"- so I need to order something like $50 worth at a time to get free shipping.

Things like "more eneloop AA's" come up now and then. I'll throw them in the cart. Cheesecloth. Consumables- I just add them.

If these mobile pocket computers didn't have such awful keyboards (I miss my blackberry...) I'd probably get the amazon app and just add stuff all day long... but curse trying to type on an infernal touchsreen.


It's certainly nothing to be concerned about.

I'm not concerned, just think it's a bit ridiculous. I also sort of want a few.

posted on Mar, 31 2015 @ 10:35 PM
link
I would, um < cough > be lazy enough to actually use something like this. Because, uh, I forget things. A lot. Hitting the button when I remember I'm low on something, then finalizing the order later on (I assume it gives follow-up alerts so you don't forget) would be really awesome for me & other scatterbrains.

Now, if they'd only tie it into your phone's GPS and have little winged valkyries deliver it to you, wherever you're at.

eta: here's a creepy story idea that just hit me...what about employing some of the unemployed by (drumroll) having a "tell me a bedtime story" button for the lazy and inept parent?
edit on 31-3-2015 by Bedlam because: (no reason given)

posted on Mar, 31 2015 @ 10:58 PM
link
Whoa, guys, this is a real thing! If you're a Prime member, you can request an invitation to participate in the Beta testing (I requested an invite)

I might would use those buttons to build a shopping list, but I plan my shopping around sales to save money. So, beyond that, beyond building a shopping list, I personally don't see them being very practical... I think the average consumer would quickly see themselves overspending, and stop using them.

originally posted by: buddha
Stupid!
you will get one from Evey company!


No, the default setting doesn't allow for that. I would assume since it's a default setting that it allows for customizing for other amounts of product to order per push, though.

I may have read the article & still been skeptical, but at least I looked further into the service than just jumping to conclusions.