posted on Mar, 30 2015 @ 01:39 PM
link
This is one of the places I went to on one of my tours in Thailand. We stopped at a WW2 Museum, The River Kwai Bridge in Khanchanaburi. This is actually my first Historical place from WW2 I have even been to in my life, and I would have never thought that I would actually go to one in Thailand of all places!

The tour-guide gave us much information surrounding this bridge and even more about the war itself, but I cannot recite it form memory, so I will just give you some info from a website as I go through the photos. 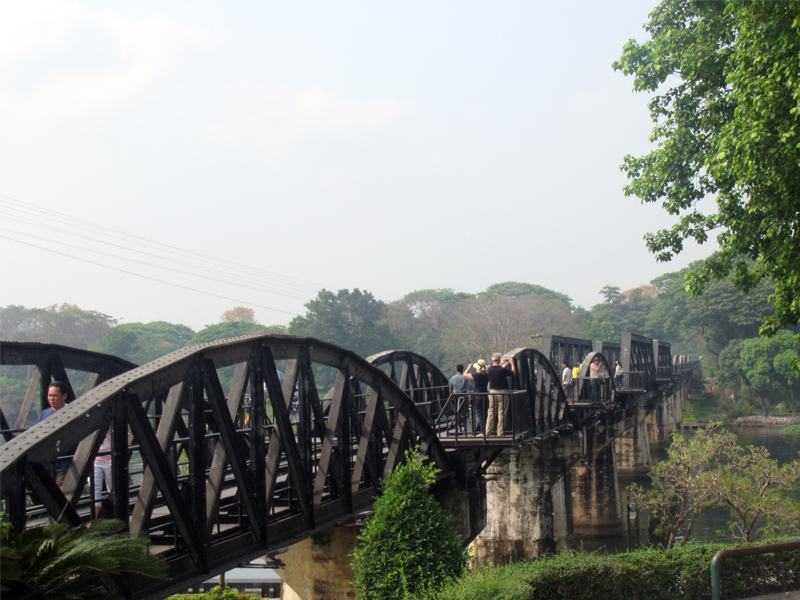 Kanchanaburi, in Myanmar border, is home to the famous Bridge River Kwai. During WW II, Japan constructed the meter-gauge railway line from Ban Pong, Thailand to Thanbyuzayat, Burma. The line passing through the scenic Three Pagodas Pass runs for 250 miles. This is now known as the Death Railway.

The railway line was meant to transport cargo daily to India, to back up their planned attack on India. The construction was done using POWs and Asian slave laborers in unfavorable conditions. The work started in October 1942 was completed in a year. Due to the difficult terrain, thousands of laborers lost their lives. It is believed that one life was lost for each sleeper laid in the track.

The notorious Burma-Siam railway, built by Commonwealth, Dutch and American prisoners of war, was a Japanese project driven by the need for improved communications to support the large Japanese army in Burma. During its construction, approximately 13,000 prisoners of war died and were buried along the railway. An estimated 80,000 to 100,000 civilians also died in the course of the project, chiefly forced labour brought from Malaya and the Dutch East Indies, or conscripted in Siam (Thailand) and Burma (Myanmar). 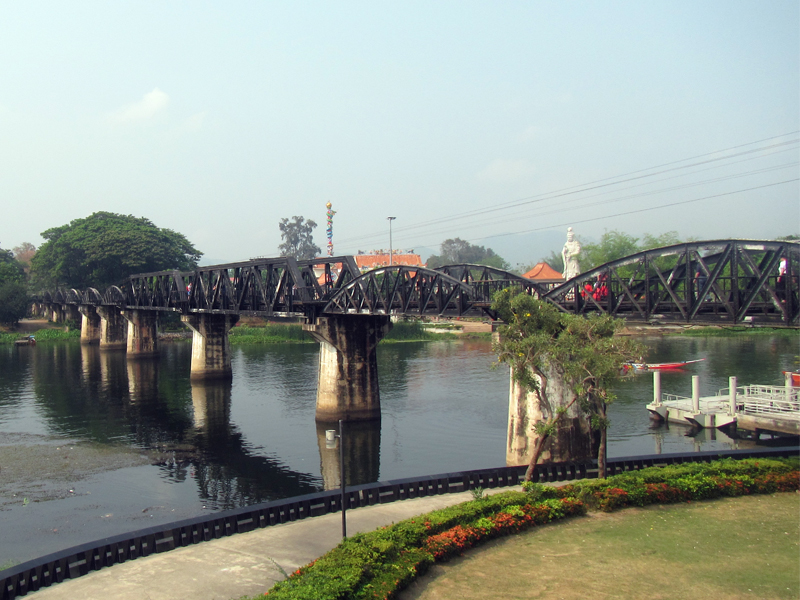 At the nearby Kanchanaburi War Cemetery, around 7,000 POWs, who sacrificed their lives in the railway construction, are buried. Another 2,000 are laid to rest at the Chungkai Cemetery. 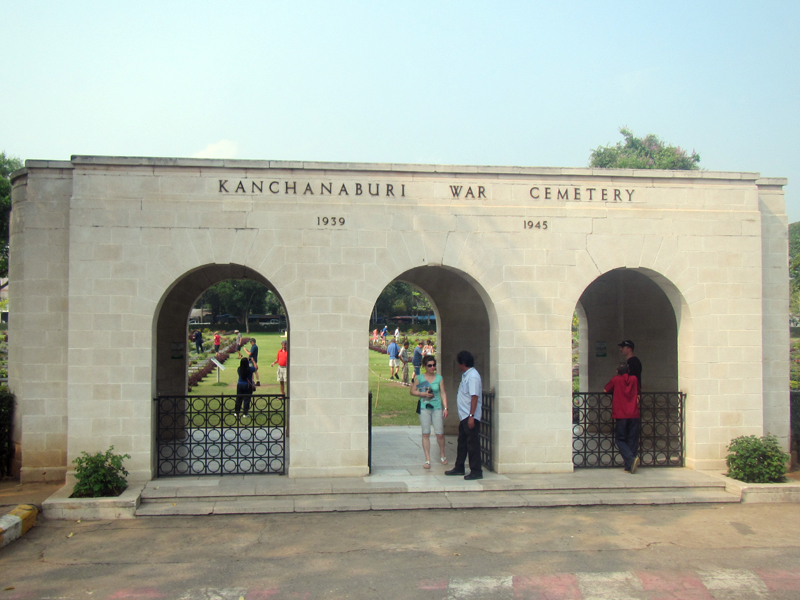 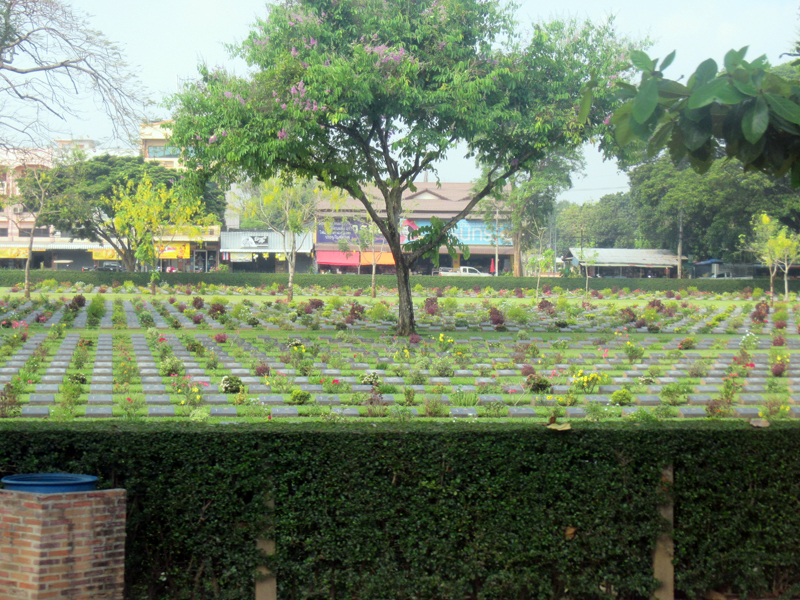 Allied Forces bombed the iron bridge in 1944. Three sections of Bridge River Kwai were destroyed. The present bridge has two of its central spans rebuilt. The original parts of the bridge are now displayed in the War Museum. 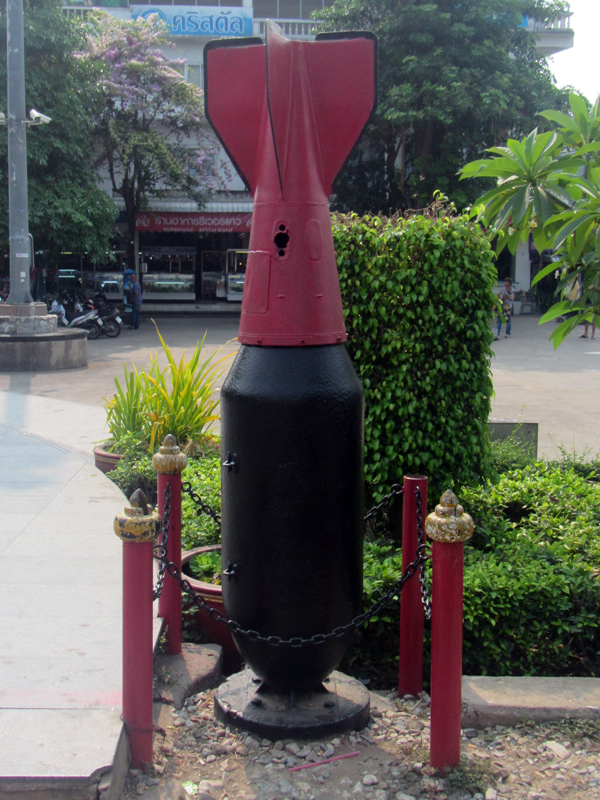 This is the type of bomb used to destroy part of the bridge. (It is an actual bomb from WW2)

I should add that the arched sections of the bridge is the original bridge, and the two blocked sections is what the bomb destroyed and was rebuilt after the war. 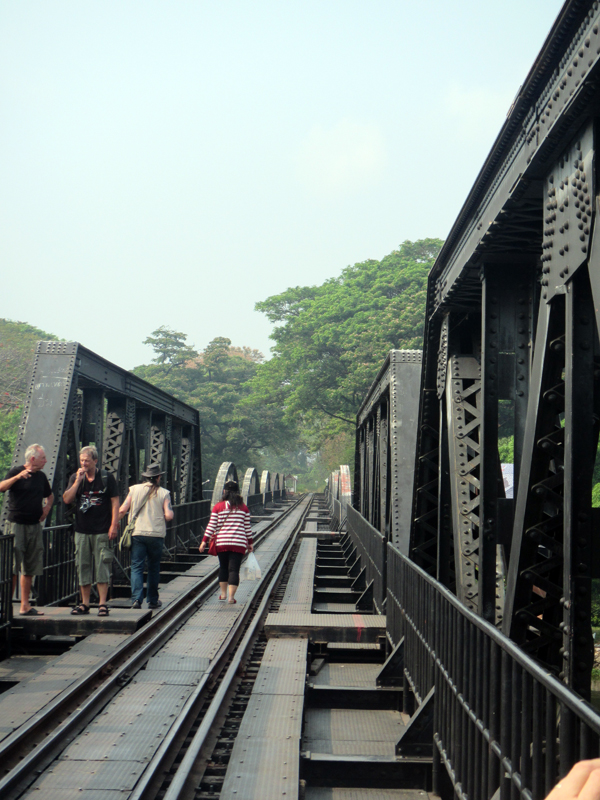 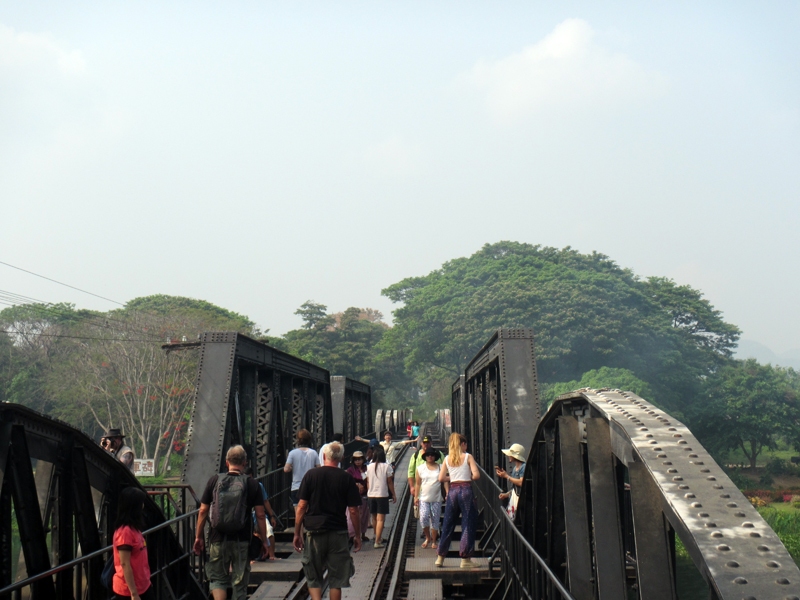 In the next photos, the tour-guide pointed out a bullet hole in the original section of the bridge from the war. 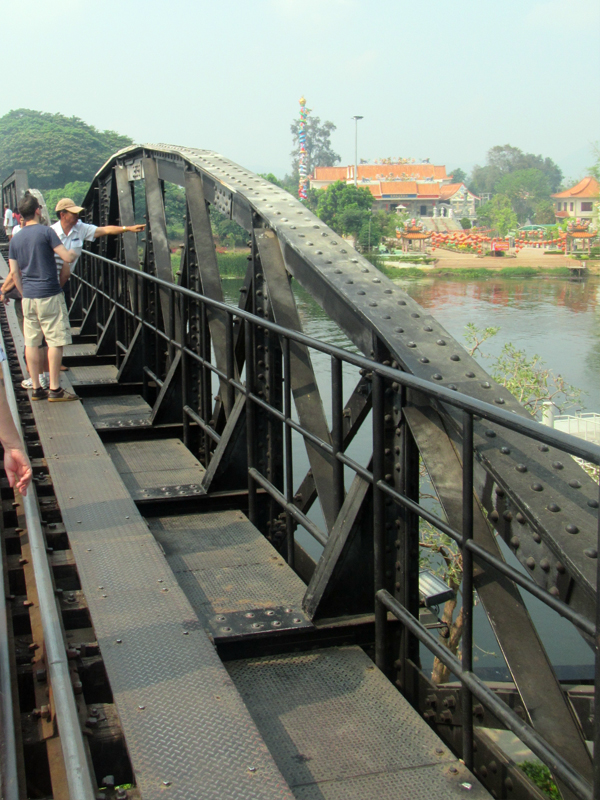 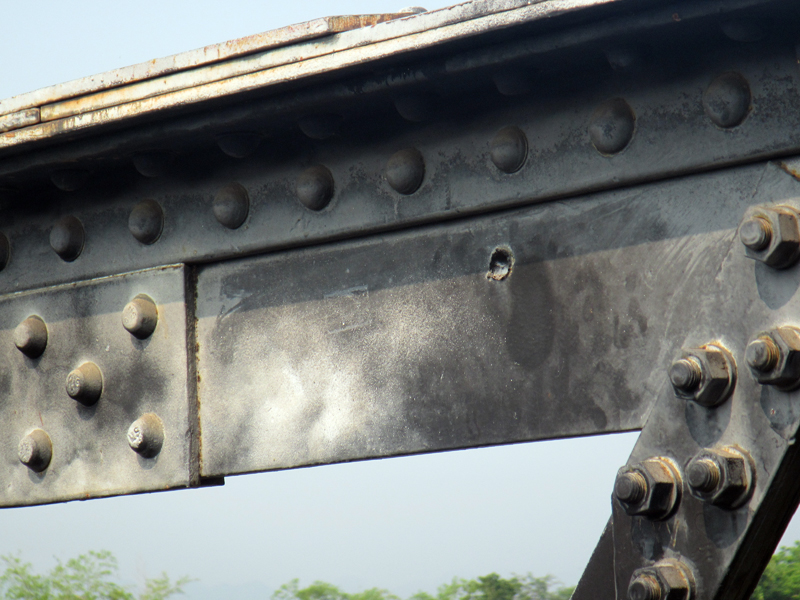 And this is just a few remaining photos of the bridge. 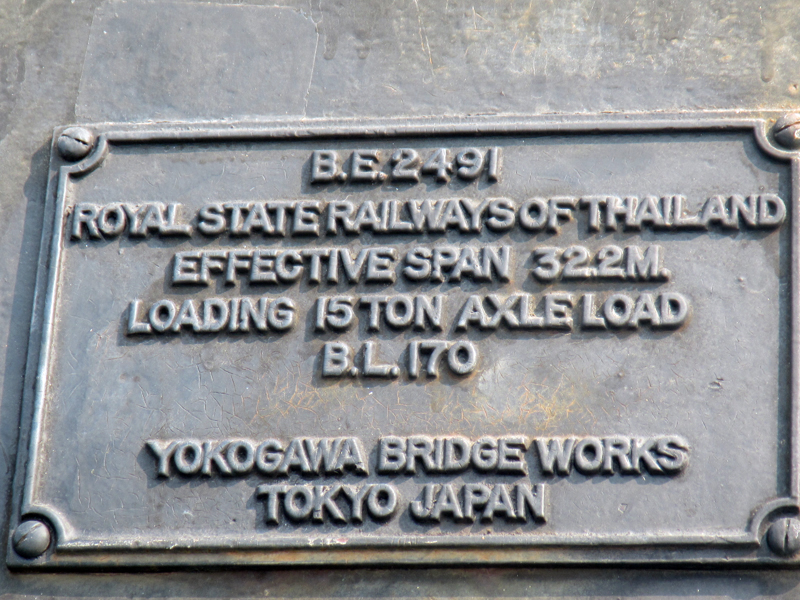 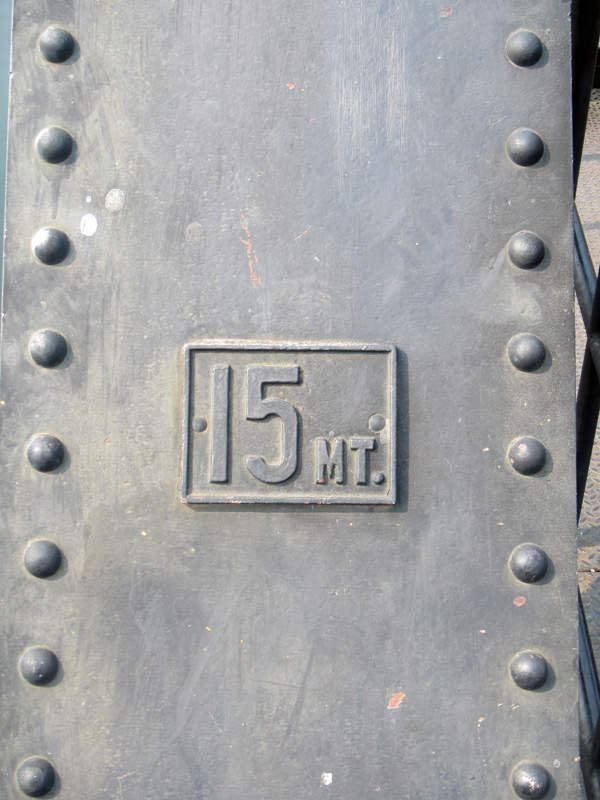 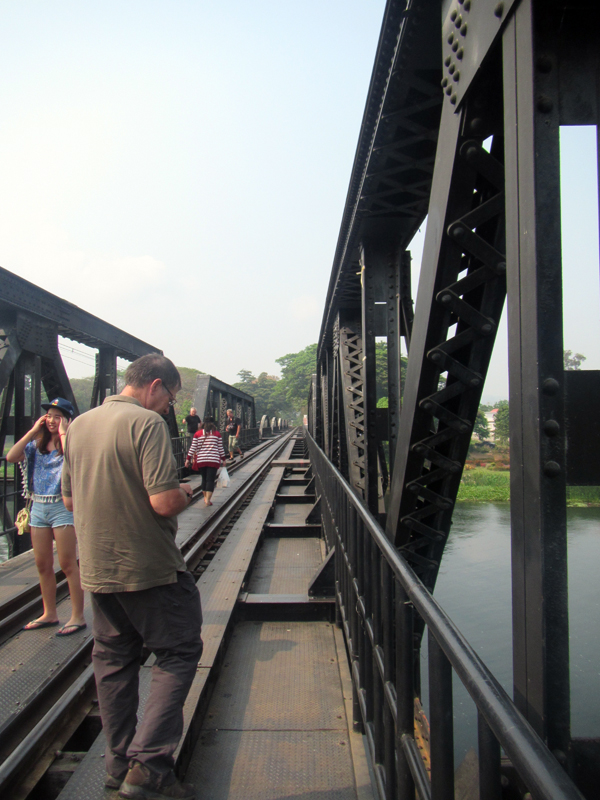 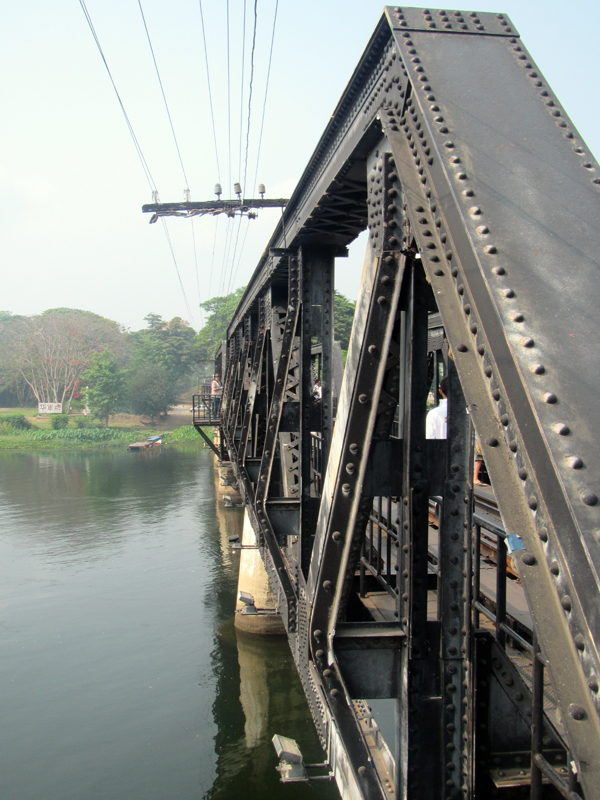 I regret not taking more photos of the original sections, but we were pushed for time, and it was a very very hot day!!

Awesome post, I remember awhile back I read the book "A Bridge on the river Kwai" or something like that about a POW there and his men. Thank you for taking the time to share your pics and talk about it SnF

I think you are correct with the title of that book, I read about it just yesterday while I was gathering info to create this thread. I would love to read the book myself. The tour-guide told us about the history around the railway and bridge for almost 1 hour long, and it was real interesting, like a real life documentary!!! Those guys really go an extra mile to make your tour worth while. He even called up a few friends that served in the war to gather more information in preparation for the tour!!!!

Thanks for reading my thread, and the S&F!! But there is still many threads to come. Just keep your eyes open for a thread with the word Thailand in it! I try to title the treads with that in so that guys like you can easily spot the new one.

But if you want I can drop you a u2u with the links as I post them?

I love to share my experiences with whoever wants to read and see it, and I really hope everyone can experience the same things as I did at least once! It really is worth every cent!!

great movie too, if anyone is interested in older films

Looks like you are having a great time in Thailand!

No I came back 2 days ago, but yes, I did have a great time!

I love alder movies! Maybe I will give this one a try as-well!!!

posted on Mar, 31 2015 @ 04:51 AM
link
I went to the bridge when I visited Thailand with my parents. I remember the scetches made by some of the prisoners and the torture techniques employed by the Japanese. It was a long time ago now, so my memories a bit vague. Still once you've visited it brings a new interest in the film, Bridge over the river Kwai. I remember my dad being slightly disturbed about the amount of Japanese visitors at the grave sites you visited, it was a bit closer to his era than mine. I didn't really think anything of it. Still it's a great trip and I'm glad my parents took me

originally posted by: IndependentOpinion
Maybe I will give this one a try as-well!!!

It is a great film. How many times do you get to see Obi-Wan Kenobi build a bridge?

It depends on how many times you watch the film...

This is some good Digital Capture IO!! NIce Shots!!!

Brings back memories. The big gaps on the bridge for falling through and the little train tootling forwards and backwards. Kanchanaburi - I stayed in the Hopping Frog for a week or so and hired a motorbike, from there headed up to Erawan National Park and stayed on a boat/wooden raft thing! Great work IO.