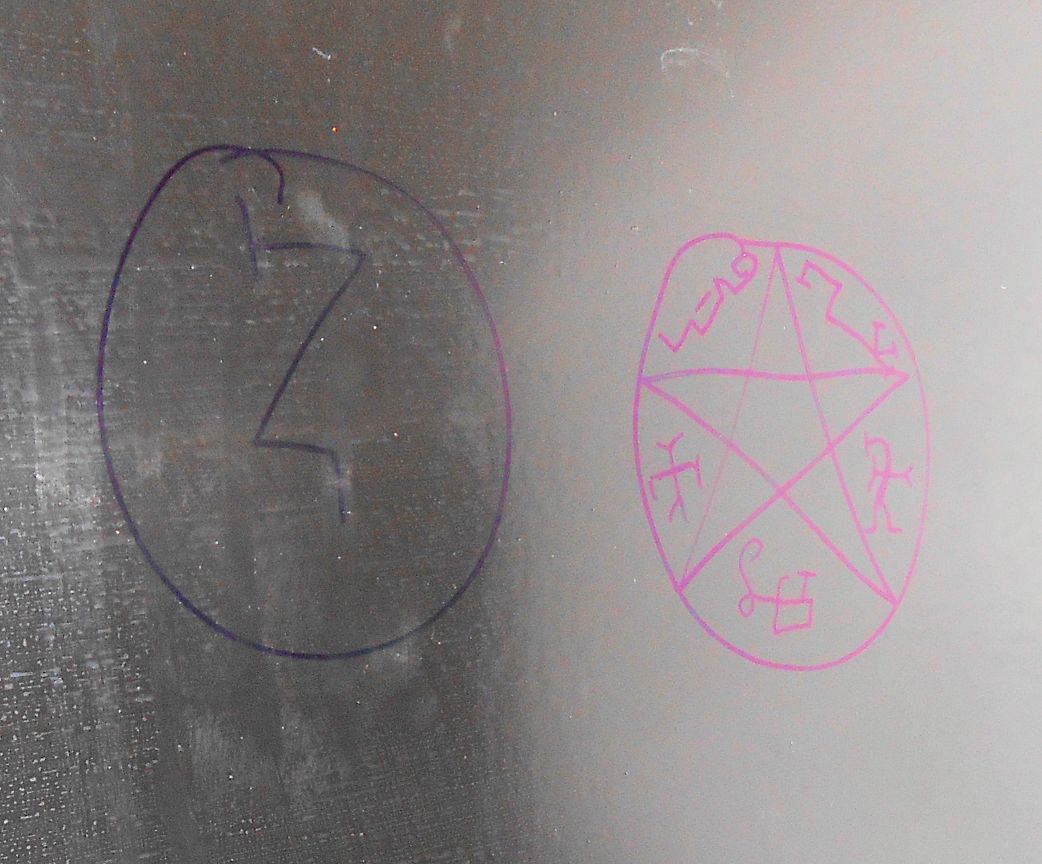 This morning I was walking past my laundry room on the first floor and heard this terrible grinding noise so I poke my head into the room and smell burning rubber or something burning...

At first I thought it was a dryer, but then I realized it was coming from my soda machine.
It sounded like a rotating grinding sound, with burning rubber smell. I go to unplug it and look up and the symbols I posted are looking me right in the face. I unplugged the machine which was fine yesterday, and actually was fine 10 minutes before when I first walked past the door. The 2nd time going past is when I heard the noise.

I did a quick search and found one of the symbols is called the devils trap, but I don't have a lot of time to do research this afternoon, so if anyone would like to help me out a little bit and find this other symbol and maybe a meaning as to what the symbols would be doing on my machine and more importantly, could it of trapped something that killed my machine?

I know some people won't take this very serious, however, the machine is out of order, the symbols were n0t there the other day, and I find the coincidence of it malfunctioning like it did a little weird. Anyways, if there is anyone with any expertise in this area who can help me identify exactly what these symbols are for and are doing on the side of my dead machine, I would appreciate it.

Those look like symbols I've seen on the TV Show Supernatural...

As a suggestion, I would perhaps, wipe them off and see if the machine comes back in order?

I'd also film it for reasons. I don't believe in any such thing, but I'd love to be proven wrong. Magic would be very cool.

(post by BestinShow removed for a manners violation)
Autorico

posted on Mar, 27 2015 @ 12:49 PM
link
I'm just curious why of all the colors that it could have been drawn with.. did it use purple and pink? Maybe a younger sibling who likes watching paranormal shows drew it on there?

Yep, since 2004, and yep, firm believer in a lot of things unworldly.

Just because you might not of experienced some of these things does not mean it does not happen.
I understand and welcome skeptical views, but not cynical.

That could be. I have 64 apartments, and a lot of kids, so who knows?

We have cameras in the laundry room, but after watching several hours worth this morning, I had to stop. It is hard to sit and watch security footage for long periods of time. I'm hoping we catch whoever did it on camera, not just for the fact that they defaced my machine, but I want to know intent.

The machine was already disfunctioning, someone got their money eaten up by it, they got pissed off, and being into things like spells and curses, drew some on the machine out of spite.
?

Pretty sure it is the condenser.
Maintenance said that was all they could think of that would cause that sound.
I already opened it and didn't see anything out of place other than I need to clean the coils and whatever the round thing is on the bottom that is really dusty...

I have no doubt it is a mechanical failure.

Ahh ok. Makes more sense. For a minute there, I thought it was a personal soda machine and thought it was strange that you didn't notice anyone mark it INSIDE your house. But you mention you it's an apartment building, so it's on the first floor.

Most likely a girl who drew that since they used those colors. If you can think of a goth/emo girl living in that building, my guess it is her. And I agree with the other user that this machine probably pissed someone off and they drew that.

If you erase it and the machine starts working again.. then maybe you may be on to something...

This thought had occurred to me, but the machine was running fine yesterday when I removed the money from it.
One of the ideas I was thinking was that maybe it was making noise and someone freaked out, thought it was possessed and drew the symbols, however, there is nothing on camera after 10 pm last night until 6 am this morning when I found it not working(8 am) and it is a good thing I noticed cause it was smelling pretty bad at that point. But I watched footage from 5 pm yesterday when I emptied the machine until 6 am this morning and there is nothing on there that shows anyone writing it, so I still have 2 hours left to watch and dunno when the machine started to malfunction, but it had to be some time this morning because the smell and heat would of triggered our alarm system if I had not caught it when I did this morning.

As to the symbols, I am certain they were not there as of tuesday this week, because I wiped down the machine then, and there was nothing there.
edit on 27-3-2015 by Darkblade71 because: typonese

Anyways, in my opinion I think its a strange coincidence, but a coincidence nonetheless.

Good luck catching the culprits on the security videos.

Wait, you have an apartment building AND a soda machine?! I'm turning all shades of green now

Could very well be coincidence.
Would never rule that out.

I don't know how long the company has owned it.
I have been the caretaker here for over 3 years and it has always been there.

I can rule out a lot of people I know, but we just had an influx of new tenants,
and a lot of them I don't know.
Every time we get a lot of new people moving in, things like this happen, if not new trails of trash, new types of graffiti.
edit on 27-3-2015 by Darkblade71 because: (no reason given)

posted on Mar, 27 2015 @ 01:26 PM
link
There should only be three rotating parts on the refrigeration end of it that would make a grinding noise:
-The evaporator fan.
-The condenser fan... if it even has one.
-The compressor.
All three can be replaced.
I have yet to see a unit that failed because it had magic marker on the outside of the case.

is this in an apartment complex/condos or something? meaning its a completely shared space with all of the other neighbors etc?

you could probably fight fire with fire. i would draw a banishing pentacle on the machine with lavender oil and see if that changes anything. in this way you can try something and it won't even be noticeable to anyone else because it'll just be done with oil.

either way, could be a fun little experiment. i've had success using the above method in conjunction with a sage smudging ritual to cleanse homes of negative entities.

p.s. upon entering the room did you have/receive any kind of energetic impression in the space after the symbols were drawn there? any difference in how the room feels? like heavy or muddy atmosphere or feelings of being watched/anxiety? curious.

it's always possible its just some kid messing about, but who knows. even kids messing about though can do things that have unintentional consequences. like opening up doors/gateways that should not have been opened or inviting things that were never meant to be invited.
edit on 27-3-2015 by CallmeRaskolnikov because: (no reason given)

originally posted by: Darkblade71
a reply to: Bluesma
... but the machine was running fine yesterday when I removed the money from it.

All machines generally run fine the day before something fails.