FEMA Camps ..I Played per accident with 2 Numbers look what i found!?

originally posted by: Gryphon66
a reply to: CharlieSpeirs

Oh ... The Beast? This is about the Anti-Christ?

What does Nero have to do with the FEMA Camp conspiracy theory again?

I guess it all depends who people claim is the anti-Christ!


Some will say the Mahdi, some say the Pope, some say QEII & some say Paddy O' Bama...

But initials hold a lot of weight in my own little conspiracy world.

I think we need the source author to tell us who their anti-Christ is to go further here.

The Number of the Beast?

I thought that was shown to be 616 and had been conclusively tied to the Emperor Nero.


A fragment from the oldest surviving copy of the New Testament shows that the number of the Beast of Revelation 13 is 616. Ellen Aitken, a professor of early Christian history at McGill University, states that “the majority opinion seems to be that it refers to [the Roman emperor] Nero.”[1] The early fragment supports the view that Revelation was written prior to the destruction of Jerusalem in A.D. 70, and whether the number is 666 or 616, the number is a reference to Nero and not some end-time antichrist figure. Only time will tell how this discovery will affect dispensationalism.

Mark of the Beast

Are they cheaper than bullets? Who's manufacturing guillotines? Where's the market to justify their manufacture?

The popular image is an art exhibit by Tom Sachs. He's an artist.

I'm 66.6% bewildered that you haven't noticed the 'Chanel' branding on the thing. FEMA and the Muslims are being sponsored by French fashion houses? That's a deep rabbit hole right there.

Do conspiracy theorists not know how websites are made?
It seems to me we have a hell of a lot of people here who have no clue that ANYONE can register a domain, buy hosting, and create a full site, and all for less than $15 a month and all within 6 hours.

This is all complete BS, manufactured by deranged fools (or some clever marketers knowing they can get thousands of clicks by posting a link on a conspiracy forum) with completely gullible people reading, and believing it.

Why would guillotines be used by the 666 folks? Historically, Christians are the ones who like to behead people they don't like. Muslims of course thought that was a pretty good idea so they do it too but... how many Satanists have you heard beheading people? Now... how many people have been beheaded after being accused of "Satanic" affiliations? It's pretty clear who digs parting heads from bodies.

It seems to mostly be people who dig the OT gods who do that .

posted on Mar, 22 2015 @ 05:26 PM
link
There is no Georgia law approving guillotine use. Official Code of Georgia Annotated. Search for yourself. The HR referenced in the OP is from the 1995 legislative session approving a request from the Condemned if they wanted to donate their organs (electrocution destroys organs). DISCLAIMER: I share no genetic material with any past or present Georgia Legislators.

There is no Federal law approving guillotine use, except for what most of us call "paper cutters" congress.gov

and ... Nero was the reference for the Biblical Anti-Christ whose number was 616.

The Beast system is a NWO system, a one world system. It has one government, one faith. I believe that Islam addresses this as well as Christianity.

If the NWO conspiracies are true, they are not above using anyone and anything to put the machinery in place.

Now, do I think they are true? It seems a stretch, but than again, if prophecy is to come to pass, there have to be some major changes on the world stage too. Are these changes that happen by seeming serendipity or are they ones that certain underground power players have been angling for?

And then again, if you go with the notion that it's all a big cosmic good v. evil ... well, yes, it is a very, very long game and there will be patterns that could be detectible in the currents of events. Are there FEMA camps? I think it unlikely. Are there plans in the government to use facilities in a manner similar to FEMA Camps? That I think entirely plausible just as we know our government in the US has war games for alien invasion. They try to anticipate every scenario.

And who is to say these plans within plans and war game scenarios aren't part of the long, long game that no one thinks of as part of any game?

I had always understood the best Conspiracy Theorists those that painfully researched and exhaustively gathered EVIDENCE to demonstrate that the "official story" told by history, governments and the media was often lacking or simply not true.

I had never understood conspiracy theory to be "whatever we might imagine to be true or possible" based on scant evidence that does not hold up to any level of serious scrutiny or research.

It must be true, it had a YouTube link. ( Sigh)

You only cut 2/3 of the way through. Duuurrrr.


An indication of the credibility of this form of rumor can be gauged by noting that the illustration used to accompany its most recent outbreak isn't a photograph of a real guillotine at all, but rather a picture of a satirical "Chanel guillotine" sculpture by artist Tom Sach

posted on Mar, 22 2015 @ 06:01 PM
link
I agree im Christian i would defend the LGBT the blacks and so on and so forth we are all his children and we should all love each other like he loves us.

if it was the catholic church or what ever church this would be unacceptable. reply to: CharlieSpeirs

posted on Mar, 22 2015 @ 06:09 PM
link
An actual requisition order by a Federal agency for guillotines would be confirmation; I don't see any such thing.

On the other hand, I do wonder if guillotine would actually be more humane than electric chair. I suspect it probably would. Though, I am against the death penalty.

One of the greatest dangers we currently face as a species is the idea that we are modern and advanced.

This particular brand of pride is what will lead our societies down dark roads in the not too distant future.

A Chanel guillotine huh? Must be the latest fashion trend from the Paris runways! 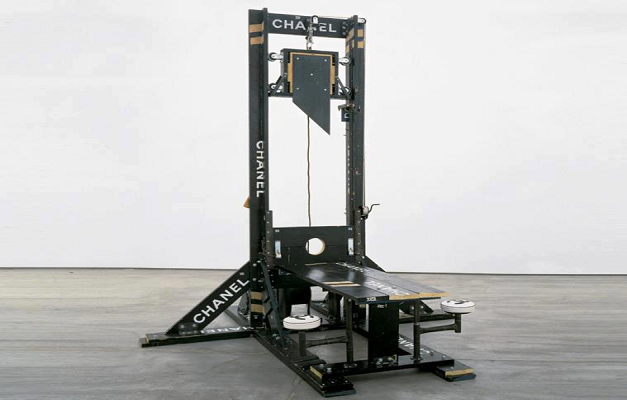 posted on Mar, 22 2015 @ 06:20 PM
link
So we know Congress did not orders any guillotines, Georgia passed no such law and that Chanel Guillotine is a sculpture. And yet we will see this same silly story posted again and again. It has been passed around since 2008. Maybe it is time to wise up so the hoaxers have to at least come up with something new.

posted on Mar, 22 2015 @ 06:23 PM
link
a reply to: DJMSN
First.This Thread was never meant to tell that these giuilotines are reality.
But it seems this thread gathers momentum in that direction.
Oh btw. i never refered to this "Chanel-Guilotinne" ok!.., it was on that site i linked to.
I'm sorry that that guy took the wrong guilotinne pic for his Blog.

I think you've never heard of the Noahide Laws then read.

"THE NOAHIDE LAWS AND PLANNED GENOCIDE OF CHRISTIANS"
“The U.S. Congress officially recognized the Noahide Laws in legislation that was passed by both houses. Congress and the President of the U. S., George Bush, indicated in Public Law 102-14, 102nd Congress….this Public Law designated March 26, 1991 as Education Day.”
This legislation makes provision for Christians and all other non-Jews in North America to be executed by beheading if they refuse to renounce their personal beliefs and come under a Jewish belief system. For Christians, this means DENYING JESUS CHRIST…or death under the Noahide Laws.
Here is what Jewish law says about this:

originally posted by: DJMSN
Alrighty....put on those red pumps and click those heels together and say "I wish it were so"....and it would still be as false as the first time the allegation was made.


An indication of the credibility of this form of rumor can be gauged by noting that the illustration used to accompany its most recent outbreak isn't a photograph of a real guillotine at all, but rather a picture of a satirical "Chanel guillotine" sculpture by artist Tom Sach


You took the post right out of my fingertips.

Wow... out the frying pan and doubling down on the fire.

What on earth do you think the Noahide Laws are?

Where in the 1991 proclamation of "Education Day" is there a death sentence for Christians?

posted on Mar, 22 2015 @ 06:37 PM
link
"The General Assembly finds that while prisoners condemned to death may wish to donate one or more of their organs for transplant, any such desire is thwarted by the fact that electrocution makes all such organs unsuitable for transplant. "

^^That's disturbing. While I recognize the need for transplantable organs, people needing those organs could be ending up with hearts, kidneys, livers etc from psychopathic crazies (those on death row that are really guilty).

Imagine receiving Jeffery Dalmer's heart, and waking up wondering why you have urges to make stew out of people?