Attack of the Baby Snatchers

The details defy imagination. In early afternoon, a 911 call came into local authorities. “She cut me,” a voice said on the other end. “I’m pregnant.” Then shortly afterward, a black-haired woman named Dynel Lane arrived at a nearby hospital. Bundled in her arms was a baby. Lane said she had miscarried, and the baby soon died. But authorities said she was lying.


This seems to originate from an earlier string of attacks that occurred in the 90's. These original attackers were merely known as "baby snatchers" and once the hospitals adapted and developed better ways to track and identify those abducted, the act of kidnapping took on a whole new, much more gruesome form known as Cesarean kidnapping or fetal abduction. The act of removing a child from another's womb against their will. Now THAT is right up there with all the other twisted stuff people do.

“These women don’t simply want a baby; they need one in order to secure all the rewards and privileges of motherhood,” she wrote. “These women so desired the attention, care and love that society gives pregnant women and new mothers that they were willing to kill to obtain it.”


That absolutely sickens me. Where I work, there are girls always getting pregnant. We all joke that if you drink the tap water, you'll get pregnant. Joking aside, this particular girl was boasting how much her next baby was going to bring in the cash. I threw up in my mouth and walked away. I have a severe aversion to people who think like that. I could literally feel her taking my money every time a walked by. Damn leeches...

There’s no shortage of examples. In 2004, a Missouri woman killed a pregnant woman and then removed her baby. In 2008, a Seattle woman attacked a stranger who was pregnant and cut her live baby from her. In 2009, a Maryland woman was arrested after she attempted to cut a baby from another woman. A study in the Journal of Forensic Science discovered eight cases between 1987 and 2002. Porter counted 21 instances globally since 1987, saying the phenomenon is increasing. All of the “womb raiders,” as they’re sometimes called, are women.


These woman fit into a fairly set profile and have been known to throw baby showers and purchase everything they need to bring a newborn into the world. Criminals, seeking the role of a pregnant woman and the expectation of being a new mother are conjuring up fake ads designed to sell baby clothing or give away excess diapers so please, exercise good judgment, get a CCP or carry a Taser if you're willing to take the risk.

Any woman out there willing to break this down from a female perspective? The desire to birth and mother a child is in every woman, but those willing to remove your child in order to benefit financially have no place on this earth. They've been added to my purge list. The picture below is incomplete and the study is from 2002. They've been added for reference only.


That is some nightmare sick sh!t. I sort of wish I didn't click the link because my view of humanity has just fallen even further.

Now I have mixed feelings about Capital Punishment but I feel like the proper way to execute these pieces of low life scum should they be sentenced to death penalty would be firing squads.

(In case you haven't seen it just recently there was a thread on how Utah lawmakers are planning on bringing back firing squad execution if lethal drugs for lethal execution isn't available.)

Just be prepared for the violence doesn't solve violence crowd. Their point is just as valid.

I'm sure they get their ass beat in prison just as hard as the pedophiles do.

EDIT: Sorry, I accidently deleted the picture at the end of the OP while editing. There's at least ten other women who aren't accounted for in this picture. Off with their heads!!! 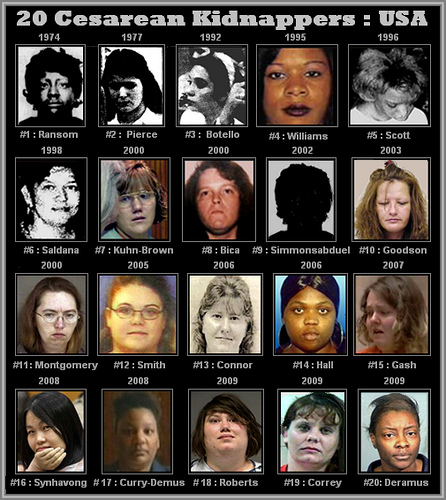 posted on Mar, 22 2015 @ 12:27 PM
link
Speaking as a woman, this is pure psychopathy. Healthy women who want a baby either do it the old fashioned way, the medical way, or they adopt. Seriously, this is beyond twisted. I wonder how they would treat their "prop" (ie baby) when it didn't satisfy their need to be seen as an awesome mom. Guesses anyone?? Sick sick sick.

Grim indeed but I'd have to disagree as to it being perpetrated for financial benefits. Not to say some women don't have kids for that reason but these attack/thefts are plain psychotic.

The details defy imagination. In early afternoon, a 911 call came into local authorities. “She cut me,” a voice said on the other end. “I’m pregnant.” Then shortly afterward, a black-haired woman named Dynel Lane arrived at a nearby hospital. Bundled in her arms was a baby. Lane said she had miscarried, and the baby soon died. But authorities said she was lying.

This Colorado case is so heartbreaking, even more so because not only did this woman kill the baby, but I heard she scarred this woman incredibly badly. If that is the case, I'll be surprised if she'll be able to have children again. Now prosecutors are debating whether to charge her with murder, if the child never took a breath, it's not murder, if the child DID take a breath, which according to the psycho's husband, he rubbed the baby's belly, and the baby gasped so he rushed his wife and what he thought was his child to the hospital, that means it's murder. Psycho told her husband she had a miscarriage and their child was in the tub dead. He rubbed the baby's belly. Baby gasped so he rushed everyone to the hospital while the real mother lay bleeding to death in the basement. When he returned home to pick up their teen daughter, police were there to greet him.

The woman, who was seven months pregnant, managed to call 911 as she lay bleeding and barely conscious in the home's basement.

"I'm pregnant. She cut me in my stomach — I'm afraid," the unidentified victim said in the call.

Just after the attack, Lane's husband, David Ridley, came home because he was supposed to take his wife to a prenatal checkup, police said. As Ridley was headed for the basement, he later told police, his wife intercepted him and claimed she had had a miscarriage.

"David ran upstairs to the bathroom and found a small baby lying in the bathtub," the affidavit said. "He rubbed the baby slightly then rolled it over to hear and see it take a gasping breath."

The couple then rushed to the hospital with the fetus, which did not survive. Lane told doctors that she had suffered a miscarriage, but she would not let them examine her, police said.