"Russian Troops in Ukraine ?
Why did you expect Russia to do nothing ????"

I'd better not start listing all the wars Britain has been involved in, for peachy reasons or otherwise, or we'll be here all bleeding day long.

Goes to show what a bunch of raving hypocrites our 'civilised and progressive nations' actually are though doesn't it.

Lol I always get a chuckle when the US accuses another country of being aggressive. Your list is only the tip of the iceberg. The only time the U.S. went five years without war (1935-40) was during the isolationist period of the Great Depression. Never gone a full decade without being involved in a war. Been at war 222 years out of it's 239 years existence or 93% of their time.

A perpetual state of war since it's founding. Calls everyone else aggressive. Lol
edit on 22-3-2015 by sosobad because: (no reason given)

These list did not include oppression and deaths of civilians who were shot dead during russification , tortured just because they had non communist views , were members of resistance or didn´t find Russian ( ussr ) annexation of their country after WW2 good for them.
How many people died or were sent to Siberia to die.. i am sure there are figures.

Good post and one that rarely get's made when people drag out the inevitable "list of wars". Now, if you also compared casualty figures for both lists, I think you'd find Russia is way out in front in that regard as well.

It's just a shame you only started from post-1945 as Russia has just a long and dark imperialist history as any other major power. In fact, the British Empire's activities in Asia were largely down to just trying to stop Russia from taking over half the world themselves.

Todays "Russia" and the former "USSR" (Union of Soviet Socialist Republics) aren't synonymous. Nice link job you did there.

Yeah, you've tried this one before but I'm afraid they are.

Russia is regarded as the inheritor state and the USSR was dominated by Russia throughout it's entire history.

It's also worth noting that ever SSR of the USSR at it's formation was born out of states that previously made up the former Russian Empire. Russian Empire > Revolution > formation of SSR's > USSR created.

Russian list of wars before and after WW2 would be just too long. Russia has longer history of wars than US as it is older country and US has been somewhat isolated when it comes to the wars on the other side of the World..

Russia is regarded as the inheritor state and the USSR was dominated by Russia throughout it's entire history.


Thats like saying the US is dominated by Americans. Good for anti-Putin rhetoric, but meaningless.

Besides the Union of Soviet Socialist "Republics" included the "Warsaw Pact" nations. Akin to NATO, who now occupies Eastern Europe instead, the Warsaw Pact is defunct.

It is easy to not understand what has been hidden in secret for many years and try and put a understanding to it today . I found this little tid bit for those that like hidden history and the why's now and why there in Crimea . "Jewish homeland proposal for Crimea – Stalin and the “Crimea California” project " freeukrainenow.org...

They also gave the arms to the Israel as well as establish the state with the US support that gave the war in 1949 against the Arab neighbors . Israel would have never come into being if not for Russia . They sent the majority of Jews packing to Palestine .with weapons ..

u know what invasion of Czechoslovakia was

we watched Russian tanks for one week paraiding in streets
then they left and we were free
and we could cash in finally the apartment we never paid for and it was all paid by comunism
yeay
edit on 22-3-2015 by MimiSia because: (no reason given)

So for you, communism was ultimately a personally profitable enterprise.

I have no idea what you're trying to claim with regards to the first comment - more deflection, probably.

No, the Warsaw Pact and the USSR were entirely separate beasts. The USSR was made up of 15 entities - 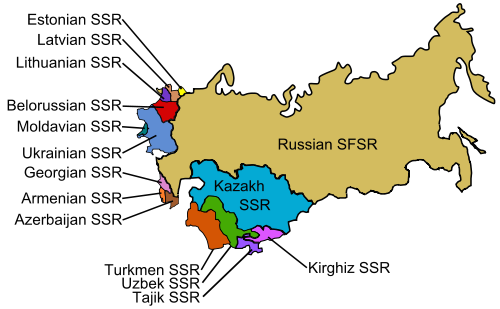 The Russian SFSR was, by far, the largest of the Soviet Republics. The other republics were made up of parts of the former Russian Empire.

The Warsaw pact was made up of the USSR + the Eastern European countries - Hungary, Poland, East Germany, Czechoslovakia, Bulgaria, Romania and Albania (briefly) - These countries were not part of the USSR.

communism is an idea and a phylosophy does anyone get that? please have a read about the benefits of communism first
like what the ? people will suck the best out of both worlds
benefitof.net...
edit on 22-3-2015 by MimiSia because: (no reason given)