Co-founder of Greenpeace: Why I am a Climate Change Skeptic

I am skeptical humans are the main cause of climate change and that it will be catastrophic in the near future. There is no scientific proof of this hypothesis, yet we are told “the debate is over” and “the science is settled.”

My skepticism begins with the believers’ certainty they can predict the global climate with a computer model. The entire basis for the doomsday climate change scenario is the hypothesis increased atmospheric carbon dioxide due to fossil fuel emissions will heat the Earth to unlivable temperatures.


Co-founder of Greenpeace: Why I am a Climate Change Skeptic

This article raises some good points, most of which we have all heard before. Please read the entire article!

I find it interesting that the writer of the article is Dr. Patrick Moore, a co-founder of Greenpeace and a known environmentalist with legitimate credentials.

Patrick Moore, Ph.D., has been a leader in international environmentalism for more than 40 years. He cofounded Greenpeace and currently serves as chair of Allow Golden Rice. Moore received the 2014 Speaks Truth to Power Award at the Ninth International Conference on Climate Change, July 8, in Las Vegas.

More from the article:

In fact, the Earth has been warming very gradually for 300 years, since the Little Ice Age ended, long before heavy use of fossil fuels. Prior to the Little Ice Age, during the Medieval Warm Period, Vikings colonized Greenland and Newfoundland, when it was warmer there than today. And during Roman times, it was warmer, long before fossil fuels revolutionized civilization.

The idea it would be catastrophic if carbon dioxide were to increase and average global temperature were to rise a few degrees is preposterous.

Recently, the Intergovernmental Panel on Climate Change (IPCC) announced for the umpteenth time we are doomed unless we reduce carbon-dioxide emissions to zero. Effectively this means either reducing the population to zero, or going back 10,000 years before humans began clearing forests for agriculture. This proposed cure is far worse than adapting to a warmer world, if it actually comes about.

He has this to say about the IPCC:

By its constitution, the IPCC has a hopeless conflict of interest. Its mandate is to consider only the human causes of global warming, not the many natural causes changing the climate for billions of years. We don’t understand the natural causes of climate change any more than we know if humans are part of the cause at present. If the IPCC did not find humans were the cause of warming, or if it found warming would be more positive than negative, there would be no need for the IPCC under its present mandate. To survive, it must find on the side of the apocalypse.

The IPCC should either have its mandate expanded to include all causes of climate change, or it should be dismantled.

I believe the climate of our planet is constantly changing, as it has done for billions of years. I do not believe there is nearly enough scientific evidence that the actions of mankind are responsible for changing the global climate.

We utilize, we pollute, we deplete, but our actions have simply not been significant enough yet. There is evidence that the climate has seen extremes throughout our planet's history that far exceed what mankind has experienced in our relatively brief time inhabiting.

By its constitution, the IPCC has a hopeless conflict of interest. Its mandate is to consider only the human causes of global warming, not the many natural causes changing the climate for billions of years.

They seem to be studying by omission.

I remember his statement and there is a documentary called "Pandora's Promise" that I seem to associate with him.

I know that the "whole earth" guy is pro nuclear now as are most ecological minded clean energy proponents.

posted on Mar, 20 2015 @ 11:27 PM
link
Well, I think that the unnatural chemistry we are dumping into our environment is definitely causing problems. Remember, unnatural is even when excessive amounts of a natural chemical or element is released in an area. The same is true with smoke coming out of a smokestack, like in China. Those smokes are unnatural and change the environment over a large area. We waste so much fuel it is ridiculous, get rid of the waste, not complain about the heat to heat a person's home then tax them for it on top of the cost of the fuels causing them hardship.

China is pushing the smog button presently, yet we buy their products and ship them half the way across the world. If that makes sense ecologically, you must be as nuts as our government is to believe a consumer based economy can be secure.

Your link is from the Heartland Institute. The same group that used to claim smoking was not harmful.

This is NOT breaking news, especially considering your source is not a legitimate news source.

A little more on the Heartland Institute:

Go ahead and keep pretending that the Heartland Institute has a reputation for actual science and unbiased reports.

Your link is from the Heartland Institute.


The link is to the Heartland Institute. The article is written by Dr. Patrick Moore. He is the source of the material (a person, environmentalist, co-founder of Greenpeace). If he posted his own article on his personal website, would we be discussing the Heartland Institute? Or would it just be something else?

This is NOT breaking news,

Do you understand what the Heartland Institute stands for?

Greenpeace lost its way a long time ago.

Furthermore, what was written is merely the man's opinion, essentially a blog with no information or links to research that supports what the man claims.

An opinion piece or blog most definitely is NOT news, and certainly not breaking news.

The best offense is a good defense.

and btw, your continuing ad-hominum is getting old fast. 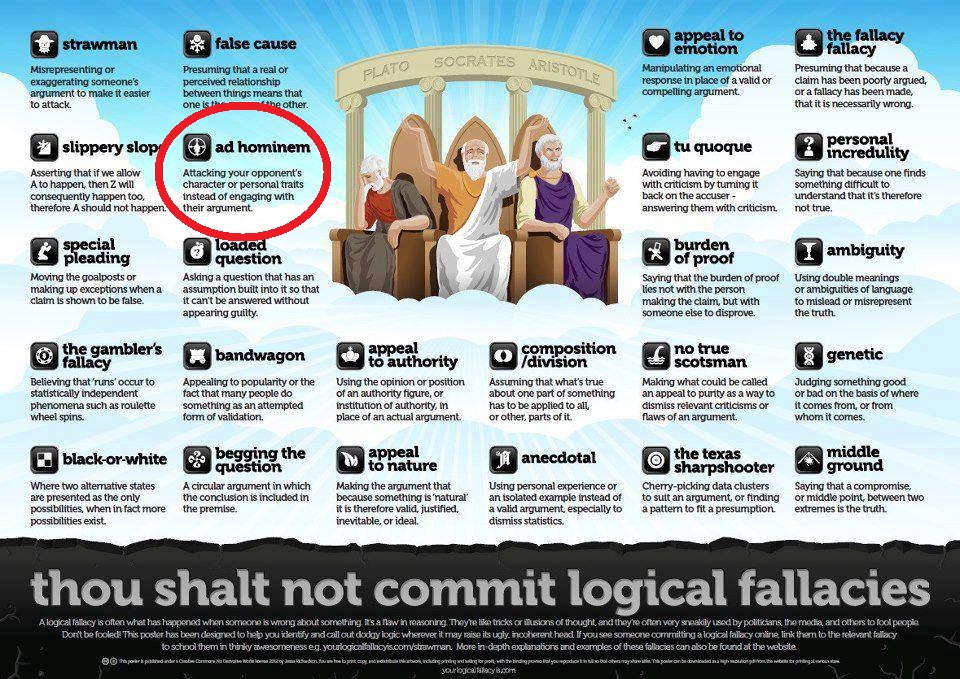 Your stance is a derivation of the ad hominem logical fallacy, circled in the chart above for your future reference.

In this instance, you have not responded to any of the contents of the article or my opinions in the OP. You have also not responded to the fact that although the article was published on the Heartland Institute site, it has a sole author who is indeed Dr. Patrick Moore, known environmentalist and co-founder of Greenpeace.

You stated that it was not "breaking news", but when confronted with the fact that the article was published today, now state that you don't care about timestamps. (???)

You continue to attempt to shift focus to the source of an opinion piece instead of commenting on the contents therein, so I dismiss this approach as unworthy of engagement.

I attack the Heartland Institute because they are notorious for using pseudoscience and social manipulation to get their agenda to appeal to the average person.

The typical ad hominem attack has no basis, clearly there are plenty of reasons to question the Heartland Institute and what amounts to pseudoscience and disinformation that they to to pass as fact. You are clearly ignoring the issue here. An opinion piece, essentially a blog does not count as Breaking News.

Since you like logic fallacies, we will play that game.

Patrick Moore is not a co-founder of Greenpeace.

Greenpeace "Founder" Patrick Moore Not a Founder at All

He is a long time industry shill who exaggerates his previous connections with Greenpeace to get more business for his "consulting services" on behalf of major corporate clients and polluters. Here's what Greenpeace themselves have to say about him:

Patrick Moore promotes such anti-environmental positions as clearcut logging, nuclear power, farmed salmon, PVC (vinyl) production, genetically engineered crops, and mining. Clients for his consulting services are a veritable Who's Who of companies that Greenpeace has exposed for environmental misdeeds, including Monsanto, Weyerhaeuser, and BHP Minerals.

And no - this is not breaking news. It's been posted on ATS several times before:


So wow, yet another "skeptical" climate change thread that turns out to be paid shills preaching their propaganda on behalf of big business.

However, instead of blaming the real toxins what has been happening is the blame on a gas that is actually needed for life to exist on this planet.

The majority of the GCMs have got it wrong for one reason, and that reason is that CO2 is not the cause of the climate change. 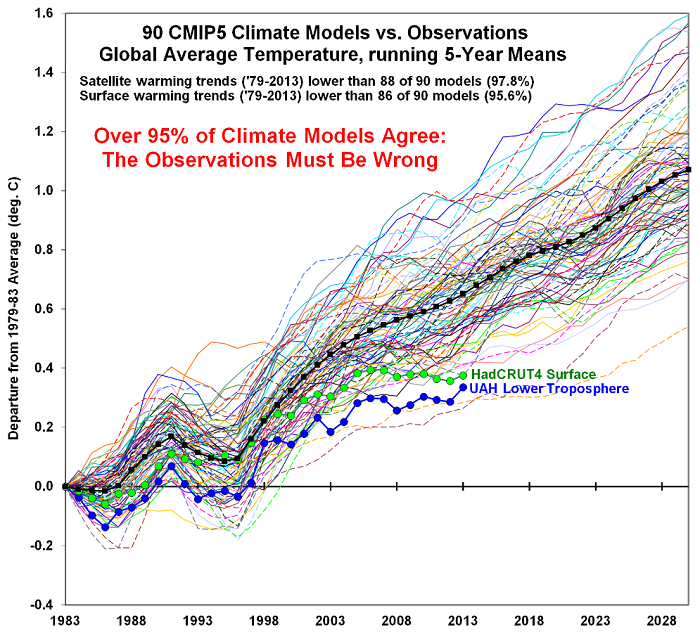 I am not surprised that Greenpeace has bashed someone who contradicts them. I have no idea if Dr. Patrick Moore is indeed a "paid shill" as he has been accused of, just like you have no idea if the IPCC is a complete racket. You can believe the "scientists" you want to believe. They get paid, too, and they continue to justify their own existence.

Wanna see a REAL paid shill? Here's your guy... the father of the internet himself, such a charitable man (or is it manbearpig?)

That's what a real shill looks like in front of Congress.

It was called "We need more carbon dioxide, not less".

Can we say "shill"? That is exactly what Patrick Moore is doing work for the Heartland Institute should be a dead giveaway.

The same folks that work for the tobacco industry and fought labeling smoking as harmful. Real trustworthy group there.

Rationality, pass it along

Did you just try to discredit the Heartland Institute and then provide a link to 'Think Progress' as a legitimate news source?

I am still doubled over laughing.

Sometimes a blind squirrel can find a nut. Thinkprogress is more credible than the Heartland Institute. The thinkprogress link has list is of known corporate donations to the group.