posted on Mar, 20 2015 @ 06:31 PM
link
Time lapse of the Boeing 737 Next Generation going from fuselages coming in to take off. I drive by this plant everyday on my way to and from work.

I prefer the one of them painting one personally. I love to watch the paint melt off.

posted on Mar, 20 2015 @ 07:42 PM
link
That was really freaking cool! The bit where they kept raising/lowering the landing gear made me chuckle, no idea why.

Where is the plant? If you don't mind saying where you commute past, anyway.

The 737 line is in Renton, with final assembly at a Boeing Field.

What do you mean final assembly? It looked pretty well assembled to me....

Or is that where all the bits that fell off get put back on?

They put the fuselage and wings and all that together in Renton then move to Boeing Field and attach it all, then test fly it, paint it and all that.

Ahhh okay. I thought it was a one stop shop kind of thing.

Thanks for the insight as always, Z

Do you have a video of the 737 being built in 4 minutes. I need to re-watch the engine being attached. I could have sworn they missed some spot welding

Like Zaph mentioned it's in Renton, WA. I commute on I-405 just to the East of the plant and see it everyday.
Boeing operates major facilities out of three airfields in the Puget Sound area:

Final assembly is. But the parts and pieces are built around the world and shipped in. Japan builds major assemblies for the 787, while France does doors and some smaller assemblies, and Italy does landing gear IIRC. The larger assemblies are put on a Dreamlifter and flown to Washington for assembly at the plant.

posted on Mar, 20 2015 @ 09:52 PM
link
That's a cool video, I find it interesting watching how a large plane like that gets built. I feel sorry for the person who has to install all the seats though, must be a long and boring job.

All the seats are on tracks so they go on quite easily and don't take long to install.

Cool, I thought it'd be like a car where they would carry them in and have to bolt them down, using rails makes sense though, especially since plane manufacturers keep coming up with larger planes with as many seats as they can get in them.

They put them together in each side of the aisle, three across and just slide them in.

The 737 Classic used to have the 737-200QC as part of its family. It had a cargo door and seats on skids. It took about two hours to go from carrying passengers to reconfigured for cargo.

typical american union labor , it took 2 minutes to put the whole plane toghether and they want 100 of millions in labor cost.

At the start of the video, they show the larger pieces being moved by train. Last summer one of the trains derailed, and they dumped a few down the embankment and into the Lower Clark Fork River. I believe they were going to repair and use some of these fuselages still. 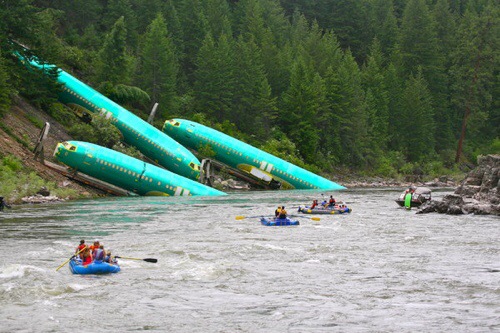 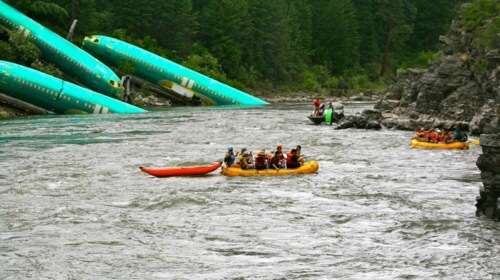 Last I heard they were all scrapped.

I'm also not sure it would be safe to use the train spilled fuselages CMD. They could have been stressed in places that know one will ever know until they blow apart in the air. Perhaps there are X ray machines that can discern stressed areas that are likely to fail.

That's a bummer. I was really looking forward to commuting in the one that was cracked in half there.
edit on 3/21/2015 by cmdrkeenkid because: Man, I miss the old, server over-loading emoticons. The new @@ really lacks that eye-rolling effect.