3 off duty cops drive wrong way on highway, crash into tractor trailer, guess who got breathalizer? 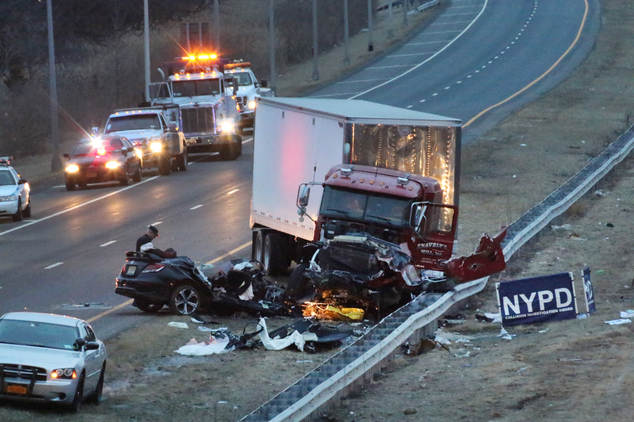 A car carrying three off-duty New Jersey police officers who had just left a strip club traveled the wrong way down a New York City highway and crashed head-on into a tractor-trailer early on Friday, killing an officer and a civilian and critically injuring two other policemen.

The dead were identified as two 28-year-old men, one a Linden police officer and the other a civilian, officials said.

Both were passengers in the car. The 27-year-old driver and a 23-year-old passenger, also Linden police officers, were listed in critical condition at hospitals on Staten Island, authorities said. The truck driver suffered injuries that weren't believed to be life-threatening.

New York Police Department spokeswoman Deputy Chief Kim Royster said one tractor-trailer swerved out of the way of the car on the West Shore Expressway on Staten Island, but a second didn't have enough time to veer away before the crash. She said the driver of the tractor-trailer passed a breathalyzer test and does not appear to be at fault.

'At this point there is no indication of alcohol in the car. ...There was no smell of alcohol.'

If you believe that I have a bridge in London I'm willing to sell.

Which is probably WHY we have to protect the guy's reputation, even in death. Pillar of the community and all that, can't have one car accident, possible DUI after a party at a strip club ruin that good reputation. Which, I get, but instead, we're going to try and ruin the tractor driver's rep by throwing a Breathalyzer on HIM instead and hope to God something pops up that we can use in court to save our buddies reputation in death, or hospitalization. Ugh! Sometimes small towns can be the best, and sometimes, they really can be the worst!

semperfortis
+15 more
posted on Mar, 20 2015 @ 02:25 PM
link
Everyone involved in any fatal accident receives either a breath test or blood test..

Ladies and gentleman I present this years Darwin award winners for "Idiocy in Law Enforcement". I have no pity for these fools.

I just don't understand... if you aren't drunk why the hell are you driving on the wrong side of the highway? Are they just that stupid?

On the surface it seems like just the start of a cover-up, but we recently had a "suicide by jumping on the freeway in front of a big-rig" and the truck driver was hauled off for a drug test / blood test / breath test.

Were the off duty officers and friend even tested? Seriously, if they weren't drunk why were they on the wrong side of the road? I just don't get it. I'm a civilian and I have never accidentally driven on the wrong side of the road. Did they perhaps recently immigrate from the UK or some other European nation where that is common? I don't get it man...
edit on Cpm2Friday3920150731Fri, 20 Mar 2015 14:39:07 -05002015 by CagliostroTheGreat because: eris deliver me from autocorrect

originally posted by: semperfortis
Everyone involved in any fatal accident receives either a breath test or blood test..

Then why was the information about, if the cops were given a breathalyzer or not, stated? Just the truck driver?

I have to agree with the OP on this, it is one sided to save face of an individual and the community he lives in.
I do not feel sorry for the deaths of the individuals involved.

I only feel sorry that the system has failed again.

The officers are in critical condition..

A full blood panel will be worked up on them as standard procedure..

This is simply hyperbole based on semantics..

ATS is better than this

Then why was the information about, if the cops were given a breathalyzer or not, stated? Just the truck driver.


Did you see the vehicle they were driving? I doubt very much the survivors were able to blow into a tube. Most likely they had their blood drawn at the hospital.

I await your follow up toxicology report that you intend to supply us with.

Which still BEGS the question, why the hell were they driving on the wrong side of the road? Who does that? Have you or semper ever accidentally driven on the wrong side? I never have. No responsible adult I know has...
edit on Cpm2Friday4620154731Fri, 20 Mar 2015 14:46:47 -05002015 by CagliostroTheGreat because: eris deliver me from autocorrect

I know the procedure because of two things..

I have been in Law Enforcement for 29 years

My wife has been a nurse for 30 years

Maybe we can discuss this as adults?

I'll Deff come back to this thread to read the results.

The Officers were most likely intoxicated..

Just going off the little information we have at this point..

originally posted by: semperfortis
Everyone involved in any fatal accident receives either a breath test or blood test..

The difference is that the truck drivers test result was mentioned. The cops results were...uhemmm, omitted in the police spokeswoman's presentation.

originally posted by: CagliostroTheGreat
Which still BEGS the question, why the jell were they driving on the wrong side of the road?

Probably because they were hammered out of their gourd.

I have driven on the West Shore plenty of times and I think you would have to be impaired to end up going the wrong way.

Have you or semper ever accidentally driven on the wrong side? I never have. No responsible adult I know has...

I have. The street I was used to driving on turned one way and I did not notice. Also, in New York, if you are not used to driving there, it is very easy to end up going the wrong way on a one way street. Additionally, there is a bad intersection near my house were someone ends up going the wrong way on the highway every month or so and this has been going on for decades.

That is the only logical conclusion I can come to. That or they were just really dumb. Actually, judging by the circumstances it is probably both...

No worries. If the driver was drunk it should not matter his occupation, he was involved in a vehicular manslaughter among other crimes.


No worries. If the driver was drunk it should not matter his occupation, he was involved in a vehicular manslaughter among other crimes.

We are talking about the Officer who was the "Drunk" driver that will be persecuted? Now the persecution part, I have a hard time believing that he will be charge with Manslaughter....Just from what is going on today...